A major new survey across 20 countries shows how pessimistic many in the West are about future prospects for their young people. Across the 20 country sample, more think it will be worse than better (42% versus 34%) – but this hides wide variation, and a split between Western/developed countries on the one hand and developing/Eastern countries on the other.

China, India, Brazil, Turkey and Russia are more optimistic than pessimistic for their young – but all other countries are more likely to think things will be worse rather than better. And this includes hugely pessimistic views in some countries in Western Europe, with France at the bottom of the list: in France seven in ten people think young people will have a worse future. People are also very negative in countries like Belgium, Spain, the US and Britain.

Even countries with relatively successful economies such as Sweden and Germany are around twice as likely to be pessimistic than optimistic for their young.

In Britain, just 20% think the today’s youth will have a better life than their parents – over half (54%) think it will be worse. 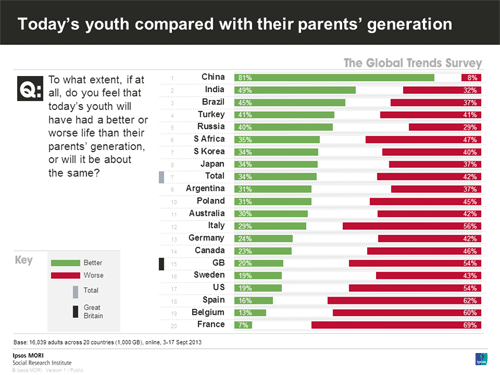 Young people themselves tend to have similar views – there is a very consistent, shared view of the future for young people in any one country among old and young. The only notable gaps are more pessimistic views among the young in Australia and South Korea than their populations as a whole – and slightly more optimistic views among the young in France and Turkey when compared with the population as a whole (although, in France, this is not saying much, as they are firmly bottom of the table on both).

When young people (aged 29 or under) are asked whether their lives will be better or worse than their parents, there is a massive range from 78% thinking their life will be better in China to just 16% in each of Spain and France and just 12% in Belgium, as the chart below shows.

Young people in a number of countries are significantly more pessimistic than the population as whole in their country, including in Belgium, South Korea, Italy and Britain.

In fact, the biggest gap is in Britain: only 22% of younger people in Britain think they will have a better life than their parents, compared with 36% among the British population as a whole. 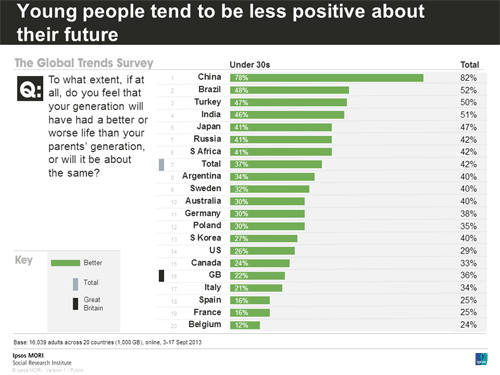 We also asked whether older people should make sacrifices so that young people can make a life for themselves. Overall, this is not a widely popular idea, with more on average across the 20 countries against it than for it – around half against versus a third in favour. Turkey stands out as particularly in favour, while at the other end of the spectrum, there is very little support for this in Germany. 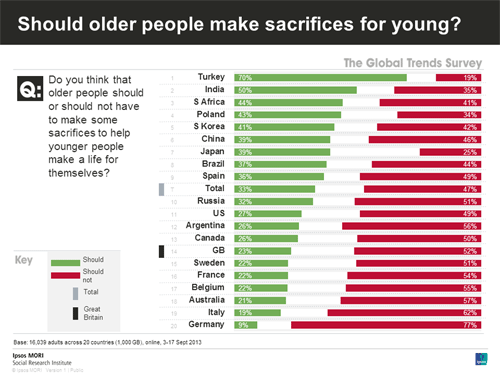 “Optimism in Western developed economies is hard to come by – particularly when people are asked to think about the future for their young people. In some ways, this should be no surprise, coming on the back of 5+ years of dire economic conditions in many western economies. But the data suggests something more deep-seated: even those economies that have fared pretty well, such as Sweden and Germany, are far from brimming with confidence for their younger generations. At the same time, things are tough for older generations in developed countries, with increasing life expectancy and declining birth rates raising very immediate concerns among older people about paying for their own retirement and care. The generally low popularity in the West of further sacrifices to help the young is likely to reflect not selfishness among the old, but a more direct concern about being a burden on their families1. The findings represent a continuing significant shift in global optimism. The assumption of an automatically better future for the next generation is gone in much of the West – and this could have far-reaching implications for how we engage with national and international politics and economics.”