Expectations of public services, including the NHS, are inexorably rising, due in large part to our experiences of increasingly sophisticated, speedy and personalised services in the private sector.

So many reports on public service delivery begin with these sorts of assertions that they are now utterly unquestioned. But are they true?

There are good reasons to think not, as Ipsos MORI explored in a recent report.

The measurement and impact of shifting expectations are very slippery subjects – but we’re unfortunate enough to be living through an extraordinary live experiment in expectations management in the public sector that points to their vital impact.

In particular, the consistent and long-term ‘austerity’ messages, telling us we can’t afford the public services we might once have had, do seem to have affected our expectations.  You can see that by bringing together just two key pieces of information.

First, the bad news. We’ve seen a significant increase in people saying that public services have got worse. In 2016, 40 per cent said services had got worse over the previous five years, up from around 30 per cent saying the same in 1998 – despite the late 1990s being a period of particular pressure on public services, before Labour loosened controls on spending.

But there is also seemingly contradictory good news. In 1998, 40 per cent said public services were falling short of their expectations – but only 28 per cent said this by 2016. It’s an almost perfect mirror: we are more likely to think services are worse, but also more likely to say that’s acceptable to us.

And, if anything, this pattern is more marked for health services. Polling with the King’s Fund last year showed that only 18 per cent of people felt that health services had fallen short of their expectations – while Health Foundation polling showed that 44 per cent of the public think the general standard of care has got worse over the past year.

This pattern, of services being seen as worse but expectations more likely to be met, is only possible if there has been some downward shift in expectations themselves.

And Ipsos MORI research in the private sector confirms the central importance of what the public expects.

We traced the impact of thousands of service experiences across sectors, and this showed that delivering what people saw as positive experiences was very often not sufficient to improve how they felt about brands or services. In fact, a third of people who said they had a positive service experience, but one that was below their expectations go on to say they thought worse of the brand afterwards. Think of a budget airline versus a high-class restaurant – Ryanair versus the Ritz – and the different standards we set depending on the context.

Similarly, our expectations of public services will be particular to their context – but the key question is whether we’re nearing a base level, where the public find it unacceptable to lower their expectations further.

There are no clear signs of this tipping point in Ipsos MORI surveys – but the public do seem to be tiring of austerity. Only one-fifth now think that there is a real need to cut spending on public services to pay off the national debt – down from 40 per cent in 2009. Two-thirds think that government services should be extended, even if it means increasing some taxes, up from a low of 46 per cent in 2009.

And health services are the most likely site of the breaking point, if it comes. Here at Ipsos MORI, we ask what is the most important issue facing the country each month, and health services are the top concern right now. Looking at the trend back to 1997, it’s been a rollercoaster ride, with public concern clearly on the rise right now – and starting to approach early 2000s levels. 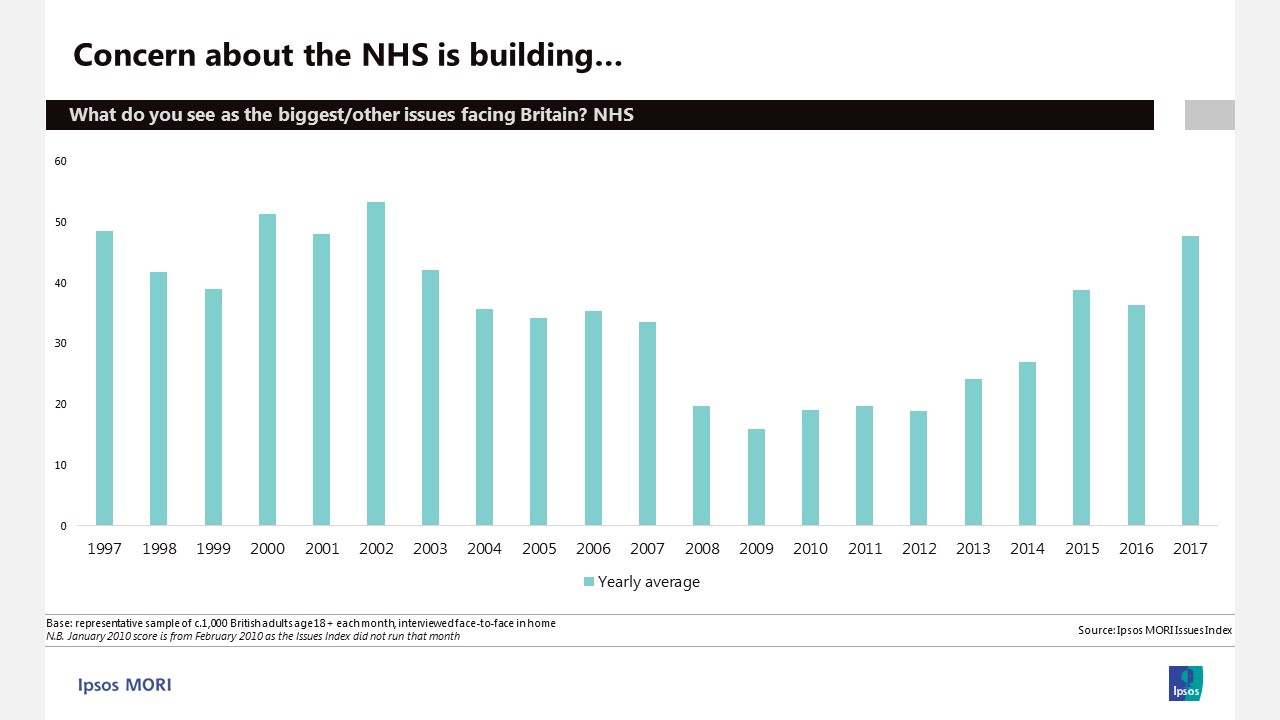 More generally, public opinion on the NHS is often extraordinary: we’ve seen these patterns in opinion so often that we’ve maybe become slightly immune, but our connection to it is about as close to universal as we see in any sphere of life.

Eight in ten say the NHS is crucial to British society and we must do everything to maintain it in its current form. Around nine in ten are committed to ensuring the NHS is free at the point of access and provides a comprehensive service to everyone.

And the recognition of strain on the service is near-universal too. Nine in ten think the NHS will face severe funding pressures in the future (it’s unclear how the other one in ten have missed the signs). In an Ipsos MORI international study across 25 countries, Britain comes third in terms of the proportion of people rating current health services as ‘good’ – but is also highest level of concern for the future. And the British public is more pessimistic about the NHS than any other public service: 62 per cent expect care to get worse over the next few years.

And given the importance of the NHS to the public and their concern, it’s no surprise that eight in ten pick the NHS as the service to protect first from further spending cuts, miles ahead of education in second place. The public even says it wants to pay more for health care now: 66 per cent say they personally, not taxpayers in general, would be willing to pay more taxes to maintain the current level of service.

And this passionate connection highlights the limitations of private sector comparisons – how different our relationship is, and how concerns about expectations leaking from other sectors are among the least of the NHS’s problems. The private sector worries about ‘liquid expectations’, where what happens in quite distinct service areas affects what the public demands in other areas. But, as you might expect, the Ipsos MORI study shows that those comparisons are much greater in some sectors than others – and the public sector is one of the most impermeable.

The contract is entirely different: in the end the private sector mostly doesn’t care how well the public feels its met their needs, except as an indicator of how loyal they’ll be to the brand and whether they’ll buy more. The private sector wants to create demand, not control it. It has only an intermediary interest in popularity contests – but governments, through elections, literally depend on them.

Expectations are vital to this popularity, and, so far, the public seem to have lowered theirs – but while we’ve not reached breaking point yet, the pressure is building.