A new online poll by Ipsos MORI shows that the Royal Family is most likely to make Britons think of the UK as a traditional and powerful country. Six in ten (59%) say they associate being traditional more with the UK due to the monarchy, similar to the score of 62% in 2018, while 3 in 10 (28%) are more likely to view it as powerful, up from 20% three years ago.

One in five (19%) say the Royal Family is associated with seeing the UK as an unequal society, while one in twenty (5%) say it is associated with viewing the UK as an equal society. Britons are slightly more likely to say the Royal Family helps the UK to appear democratic (14%) than undemocratic (10%). When considering whether the monarchy make the country seem inward or outward-looking, opinion is split with one in ten (9%) associating it with each option. 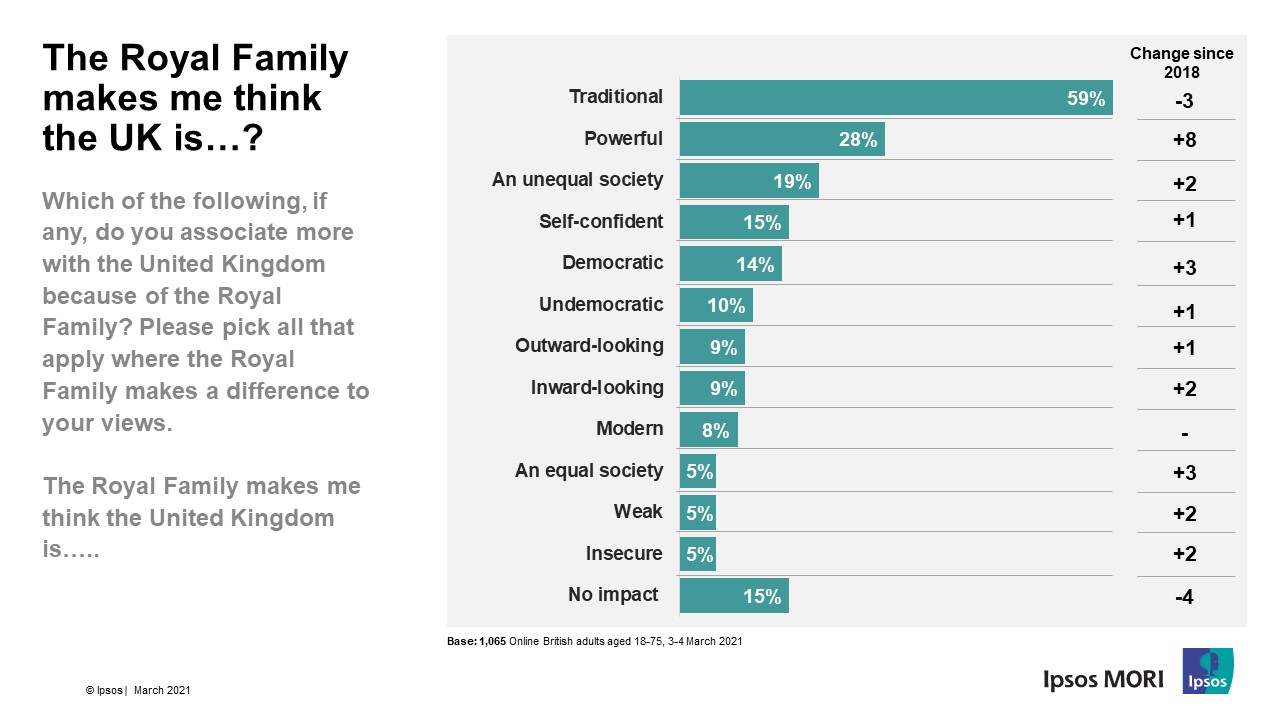 Who is the nation’s favourite member of the Royal Family?

Queen Elizabeth II remains a popular member of the Royal Family. Forty per cent select the Queen as one of their most liked, an increase from 32% in 2018. Prince William is second, with 3 in 10 (32%) Britons rating him as a favourite, followed by his wife, the Duchess of Cambridge, on 29%. Prince Harry is fourth-most popular on 24%, a sharp fall from his score of 42% in 2018. His wife, the Duchess of Sussex, is one of the favourites of 13% of Britons, similar to her score of 14% in 2018.

Princess Anne, the Princess Royal, is the most popular of the Queen’s children with 17% (up 7 points since 2018). Prince Charles is one of the most liked for 13% (up 4) while 5% chose Prince Edward and 2% Prince Andrew. 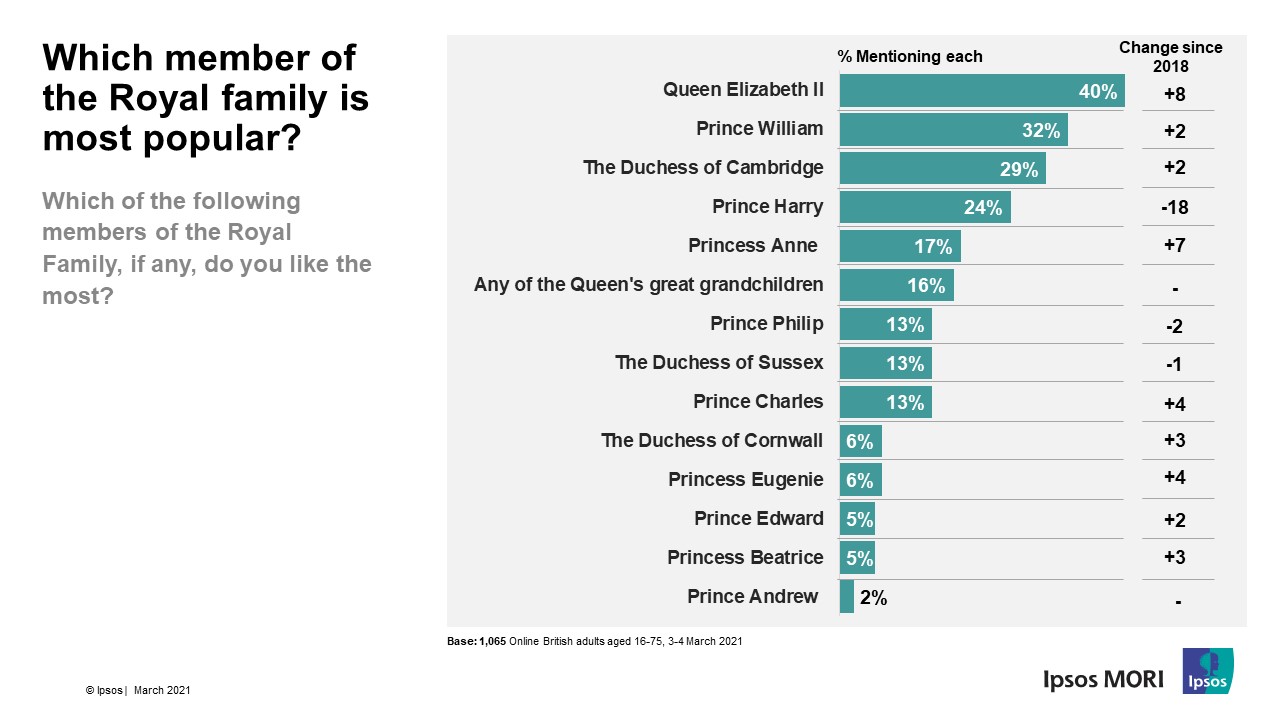 How interesting are the Royals?

Despite an increase since 2018, opinion is split when it comes to levels of interest in the Royal Family. Half (51%) say they are interested in hearing news about the monarchy, up from 45% three years ago. However, a similar proportion are less interested (48%), including one in five (20%) who are not interested at all. Interest is significantly higher among women (58% vs. 44% of men). 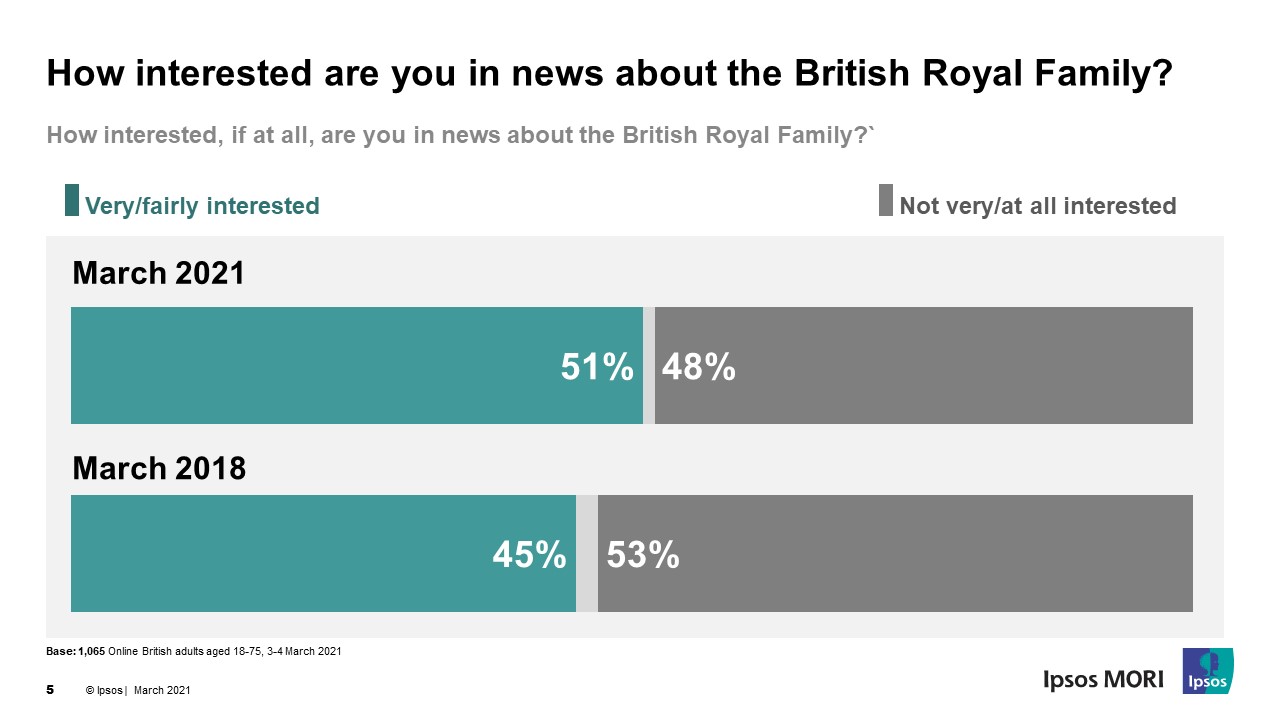 Would abolition be good or bad for Britain?

More Britons say the abolition of the monarchy would make Britain’s future worse (43%) than make it better (17%) – one in three (34%) think it would make little difference. This remains largely unchanged since the question was last asked in 2018 when 46% said abolition would have a negative impact compared with 15% who believed it would be an improvement. Young people are the most indifferent (45% of 18-34 year olds think abolition would make little difference), but still more believe losing the monarchy would make things worse for Britain in the future than better (by 29% to 19%). 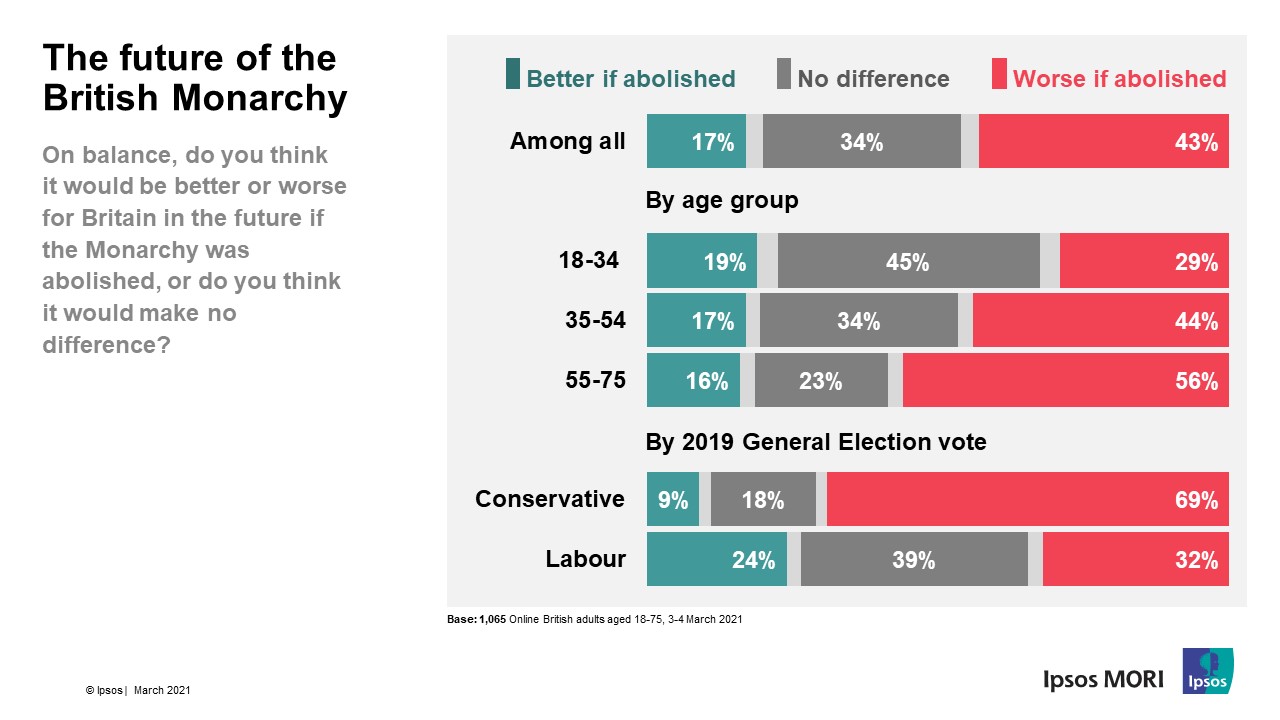 Our new research shows that the Royal Family continue to be viewed as part of what makes Britain traditional, whilst there is also an increase in those who see it as a sign of power.  The Royal Family have, in recent years, faced a significant increase in media interest and not all of it positive, but this has done little to dent Britons’ fondness for the Queen, who tops the poll as the most popular royal.  In addition, there is little sign of an increase in those who think abolition of the monarchy would be a good thing, with just 17% who think it would be better for the future of the country.

Ipsos MORI interviewed a representative sample of 1,065 adults aged 18-75 in Great Britain. Interviews were conducted on Ipsos MORI’s online omnibus between 3rd and 4th March 2021. Data has been weighted to the known offline population proportions for age, working status and social grade within gender and for government office region and education.  All polls are subject to a wide range of potential sources of error.