For the past several months, Ipsos MORI has been monitoring social media conversation about key political and societal topics. While this does not cover every topic that British social media users discuss, it gives us a good view of how much people are posting about and engaging with posts about key topics. We discovered these by focusing first on what comes up most in political forums and then writing queries about all of those topics to track them amongst more general social media posts by individuals and organisations (including the media).

In September, as in every month for the past year, Brexit and Europe are most discussed – which is consistent with its being mentioned as the top issue facing Britain in Ipsos MORI’s Issues Index. However, Brexit has not always been the star. A year ago, crime was most posted about. Indeed, crime posts can generate greater engagement (interactions, measured by likes, shares, reactions) at times than Brexit posts. Greta Thunberg’s speech to the UN managed more interactions than either topic on the day. The award for most interactions in the month, however, went to Brexit at the beginning of the month, when people were engaging with content about no deal and also sharing pictures of Jacob Rees-Mogg’s recumbent position in Parliament.

Interestingly, although Jeremy Corbyn has a higher total reach based on our topics than Boris Johnson does, Johnson's posts on these topics generate more interactions (which can be positive or negative) than any other influencer during September. 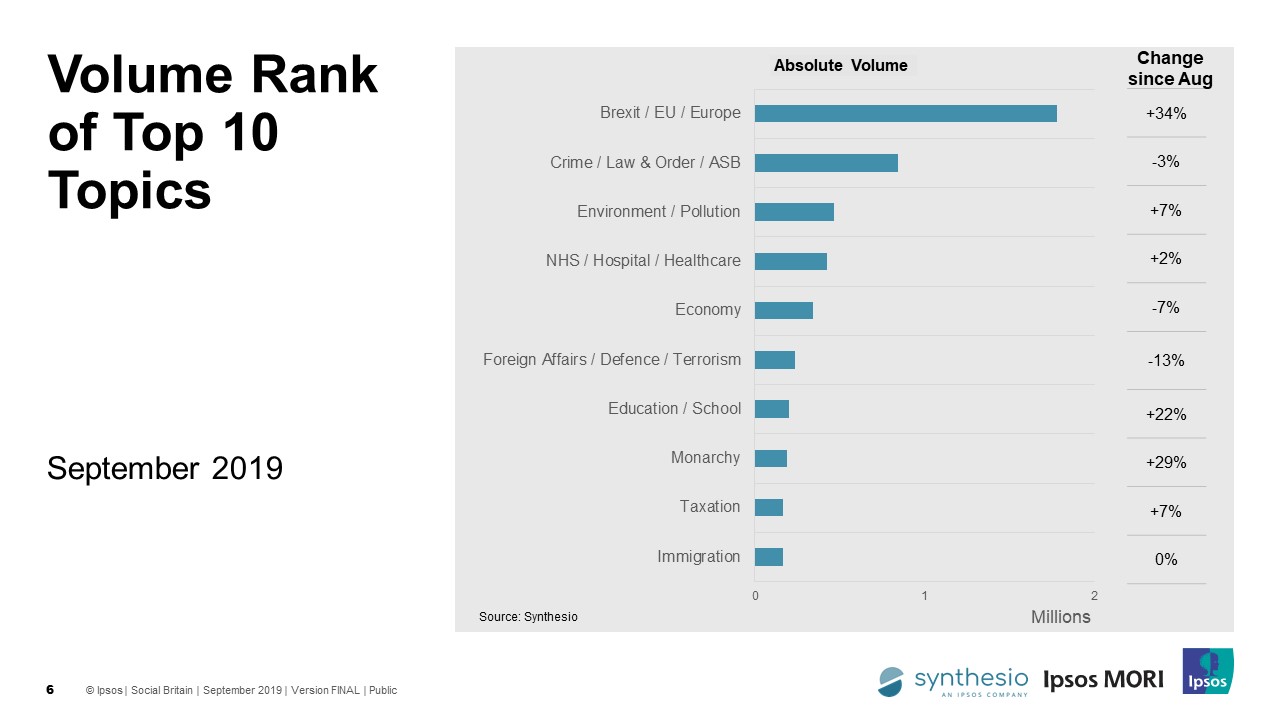 Ipsos MORI’s new Social Media Britain report offers an additional way to understand the public’s views about issues relevant to Britain. Social media are by no means representative, and many social media data are not accessible. (Nor should they be. For our views on the ethics of social media data, see this paper). Nor does our analysis take into everything that people in Britain talk about on social media over the period. Nevertheless, social media gives us an insight into people’s interests and concerns when we are not actively prompting them to think about a particular issue or topic.

Our analysis is based on a list of 21 topics tracked over the course of a year. We determined these topics by first analysing data from politically active forums and used text analytics-based analysis of these data to help us write queries in Synthesio. We leveraged the Synthesio platform to gather and analyse the data.