Following the Lionesses’ 4-0 win over Sweden in the Women’s Euro semi-final, 44% of the British public – and 64% of self-identified football fans – say they’re more interested in watching women’s football in the future. Verbatim comments cited the “less tribal and aggressive” atmosphere, as well as the inclusive nature of the women’s game as factors that have driven this interest, with one respondent saying they thought the tournament was “more for everyone” and less of a “boys’ club.” 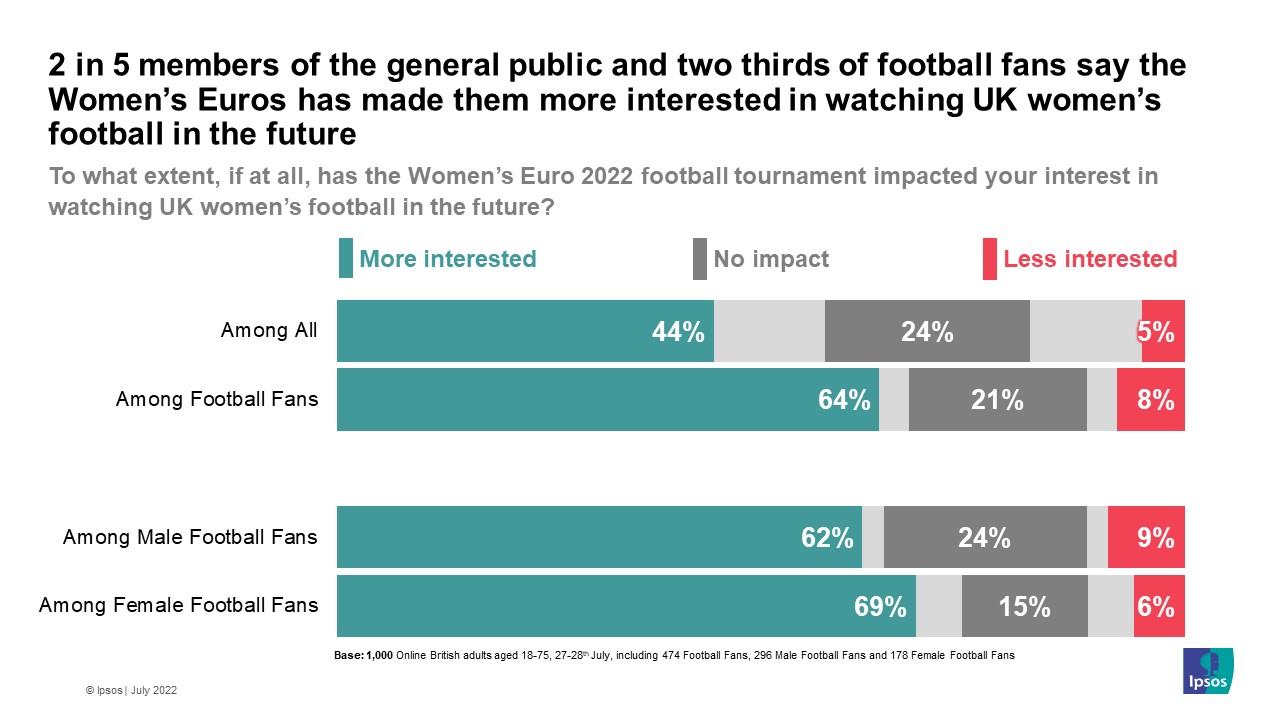 The Lionesses’s success has likely played a part in driving engagement, with more people saying they’ve been interested by the end of the tournament than said they intended to follow it closely during the group stages. During the group stages at the start of the tournament (8th/9th July), only 27% of the general public intended to follow it closely. By contrast, this is nearly half of the share of Britons who reported similar intentions for the Men’s Euro tournament last summer (53%). Similarly, while 93% of football fans intended to watch the Men’s tournament closely, this figure was 54% for the Women’s tournament.

The progression of women’s football will require overcoming enduring perceptions of being less skilled and less entertaining than the men’s game – perceptions that this summer’s tournament has had mixed results in shifting.

Amongst the general public, 1 in 4 (24%) asked during the group stages felt that women’s football was less skilled than men’s football, a similar proportion (27%) still holding this perception following the semi-finals. Perceptions of the skill of the women’s game amongst football fans is even less positive, with 4 in 10 (39%) now saying the woman’s game was less skilled – consistent with the 42% who said the same at the start of the tournament. This opinion is more strongly held by male football fans (45%) than female football fans (26%).

Meanwhile, although 2 in 3 (64%) members of the public are aware of FAWSL (FA Women’s Super League), the UK’s highest league for women’s football, the fact that more than a third are not shows there is still scope to build awareness of the competition - with the success of the Lionesses this tournament offering the potential to improve attendances in the future.

Kelly Beaver MBE, CEO of Ipsos in the UK and Ireland, said

This year’s Women’s Euros have been a brilliant opportunity to highlight the talented female athletes we have in Europe – not the least of which England’s own Lionesses! Our research demonstrates that there is growing interest around the women’s game, but that there’s more work to be done around challenging perceptions of skill in women’s sport. The perceived higher levels of safety and accessibility of attending the women’s game provides a great opportunity for the FAWSL and Lionesses to build on this momentum to attract even more fans and families to matches in the 2022-23 season.