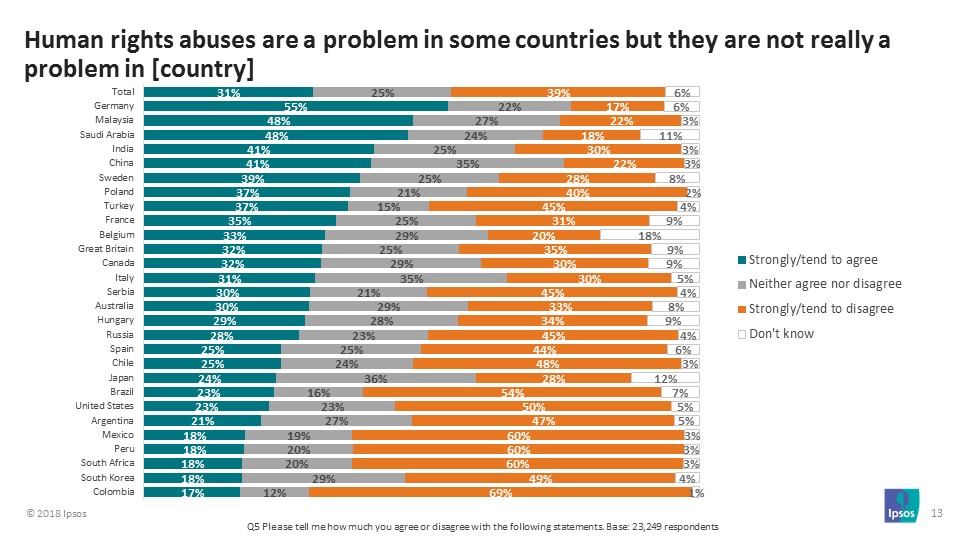 Human rights are seen as important and the majority of the British public values them, yet there is a sense that not everyone in the country enjoys the same universal basic human rights. This is borne out by the fact that Brits are more likely than the global average to highlight the need to protect people’s right to freedom from discrimination, slavery or forced labour and torture – issues which are disproportionately more likely to affect more vulnerable groups in society.
Knowledge of human rights is patchy, and there is a prevailing view that some people take unfair advantage of human rights. A significant minority believes that undeserving groups – such as criminals and terrorists- are most likely to benefit from them. That said, the majority of the British public believe that human rights do make a positive difference to their everyday lives.

Approximately 1000+ individuals participated on a country by country basis via the Ipsos Online Panel with the exception of Argentina, Belgium, Chile, Colombia, Hungary, India, Mexico, Peru, Poland, Russia, Saudi Arabia, South Africa, South Korea, Sweden and Turkey, where each have a sample of approximately 500+.

Brazil, Chile, China, Colombia, India, Malaysia, Mexico, Russia, Peru, Saudi Arabia, South Africa and Turkey have lower levels of internet penetration and so these samples should not be considered to be fully nationally representative, but instead to represent a more affluent, connected population. These are still a vital social group to understand in these countries, representing an important and emerging middle class.