After reaching a record level of concern in July following Britain’s decision to leave the EU, fewer Britons now show concern about the EU, according to Ipsos’s August Issues Index. Three in ten (31%) now say they are concerned about the EU – down 9 points from July – although it is still seen as the single most important issue (mentioned by 21% as their most concerning issue). 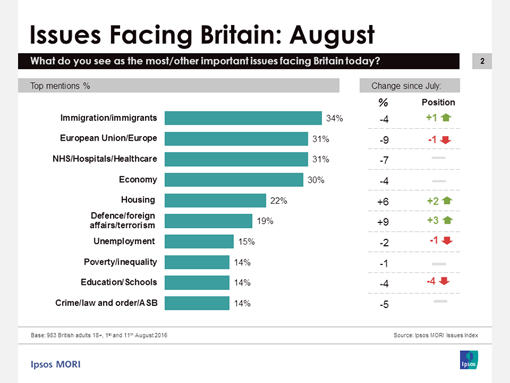 Immigration has once again taken the top spot with one in three (34%) saying it was a concern (down 4 points from last month) despite being at its lowest level since March 2015. Immigration remains particularly relevant for Conservative voters with 45% mentioning it as their concern compared with just one in four (24%) Labour voters. The NHS claims the third spot on the Index with 31% mentioning it as a concern (down from 38%), while three in ten (30%) mention the economy (down from 34%).

Housing has moved up by two places and is cited as a concern by 22% (up 6 points from July) - its highest recorded score on the Issues Index since October 1974. Housing is a particular concern amongst younger people where one in four (26%) 18-34 year olds mentioned it compared with 17% of those aged 55+. Those in Greater London also express housing concerns, where it is mentioned by 44%. Differences amongst tenure type are also worth noting; renters are more likely to mention housing as a concern (27%) than those either paying a mortgage (22%) or who own their home outright (14%). 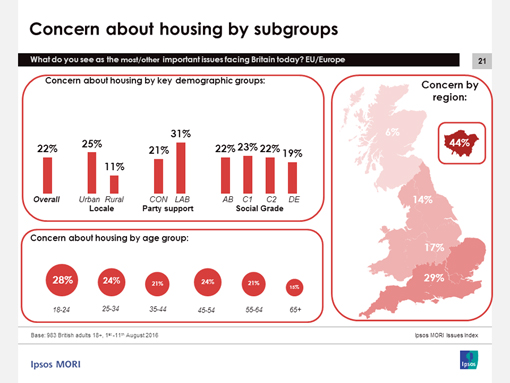 The number mentioning defence nearly doubled from 10% in July to 19% this month. Fieldwork was conducted between the 1st and 11th August, following the tragic events that took place in Nice in mid-July.

Ipsos's Issues Index is conducted monthly and provides an overview of the key issues concerning the country. Ipsos interviewed a representative quota sample of 1,025 adults aged 18+ across Great Britain. The questions are spontaneous - i.e. respondents are not prompted with any answers.

Ipsos's Capibus vehicle was used for this survey. Interviews were conducted face-to-face in-home between 1st and 11th August in 188 sampling points across Great Britain. Data are weighted to match the profile of the population.