The Conservatives maintain a comfortable lead over Labour according to the latest Ipsos Political Monitor. The poll shows the Conservatives on 44%, Labour on 28%, the Liberal Democrats on 16%, the Brexit Party on 3% and the Greens on 3%.  These numbers take into account reallocating vote intentions in seats where the Brexit Party, Liberal Democrats, Greens and Plaid Cymru are not standing (see notes below). 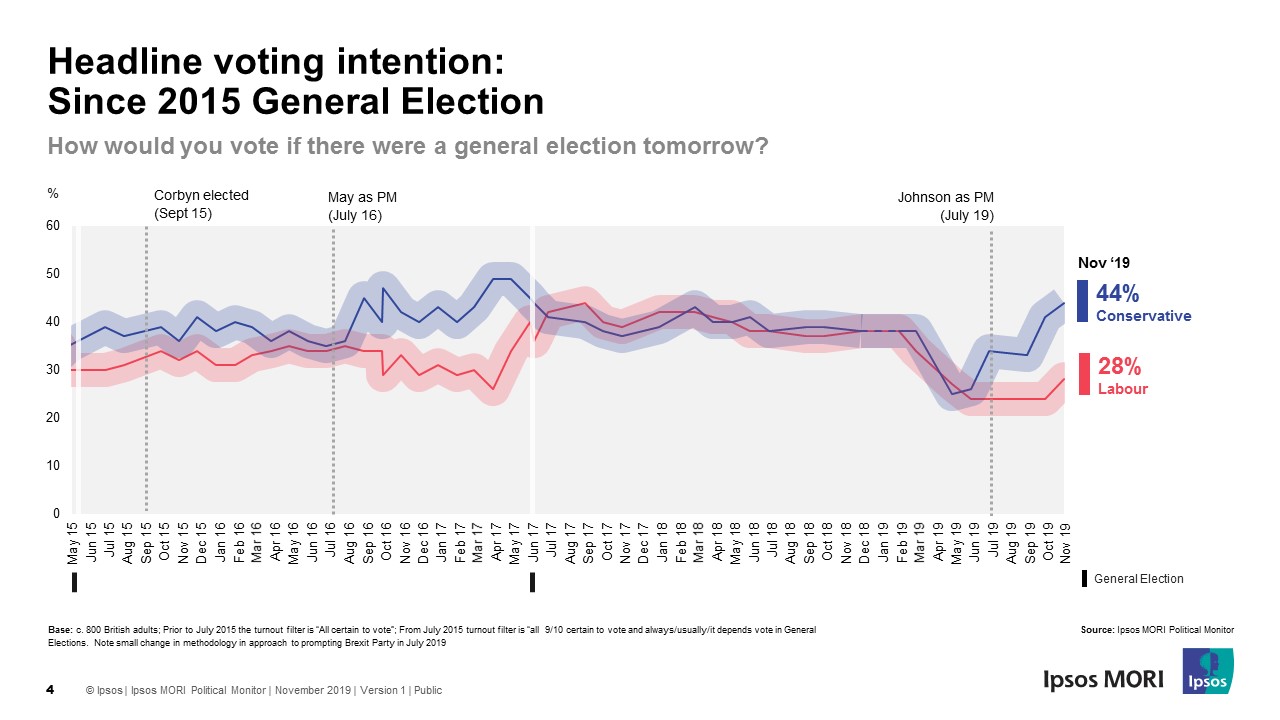 Brexit is seen as the top issue helping voters decide which party they’ll vote for with 63% mentioning it (note these are spontaneous, top-of-mind responses, not prompted). Brexit is followed by the NHS (mentioned by 41%), education (21%), taxation and protecting the environment (both 11%), and managing the economy (9%).  Brexit is particularly important to Conservative and Liberal Democrat supporters (76% and 77% respectively), while Labour supporters are just as likely to pick the NHS (by 48% to 45% saying Brexit).

The public are telling us that they care more about the outcome of this election than previous ones, and yet four in ten say they might change their minds – also more than in 2017.  At the moment the Conservatives have most reason to be pleased – they keep their lead in voting intentions and their supporters are less likely to say they may change their mind than Labour or the Lib Dems.  But there is clearly potential for this to change as the campaign continues.

Ipsos interviewed a representative sample of 1,228 adults aged 18+ across Great Britain. Interviews were conducted by telephone 15th – 19th November 2019.  Data are weighted to the profile of the population. All polls are subject to a wide range of potential sources of error. On the basis of the historical record of the polls at recent general elections, there is a 9 in 10 chance that the true value of a party’s support lies within 4 points of the estimates provided by this poll, and a 2 in 3 chance that they lie within 2 points.  Voting intentions this month are based on all those who said they are registered to vote, and also take into reallocating according to which parties are standing in which constituencies.  After being asked the regular voting intention questions, participants who had chosen either the Brexit Party, Liberal Democrats, Green Party or Plaid Cymru were then asked: “And if there was no [INSERT PARTY NAME] candidate in your constituency, how would you vote?”. In constituencies where a participant’s first preference party were not standing a candidate, their answers have been reallocated to their second party preference. Before this reallocation headline figures read: Conservatives 43%, Labour 27%, Liberal Democrats 16%, SNP/Plaid Cymru 5%, Green Party 3%, Brexit Party 4%.