More than a third (36%) say they are satisfied with the way Philip Hammond is doing his job as Chancellor while 45% are dissatisfied – little change from his ratings in March.  Philip Hammond is also still seen as being the most capable chancellor when compared to John McDonnell – two in five (41%) pick Mr Hammond with a third (32%) opting for Mr McDonnell.  The gap has closed from November of last year (when it was 46% for Hammond and 28% for McDonnell), though these new figures are still similar to March 2015 when it was between George Osborne and Ed Balls. Philip Hammond also beats fellow Conservative Michael Gove as a more capable Chancellor by a margin of 49% to 19%. This figure rises to 61% for Mr Hammond and 20% for Mr Gove amongst Conservative supporters. 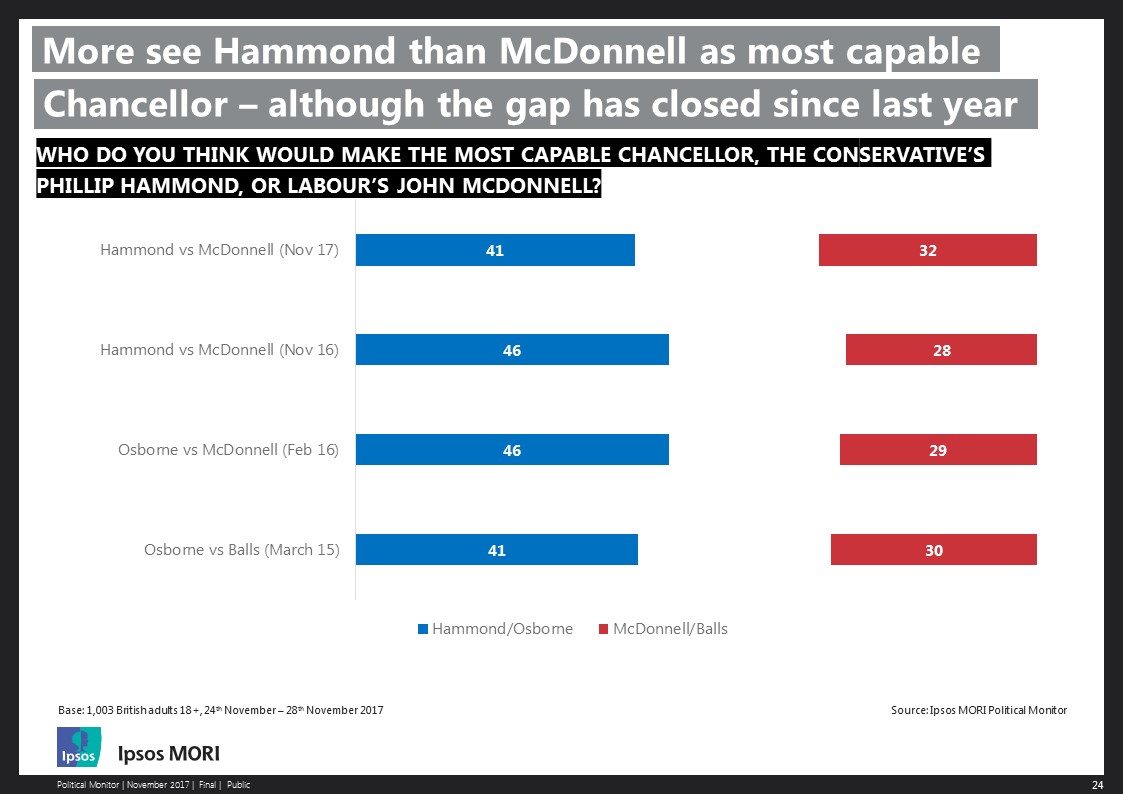 The government’s new budget however has done little to ease the public’s mind on the state of the economy. The new poll shows 58% now believe the economy will get worse over the next 12 months (up 7 points from last month) while 15% think it will get better (down 4 points) – leaving an Ipsos Economic Optimism Index score of -43 (down 11) the worst score since 2011. 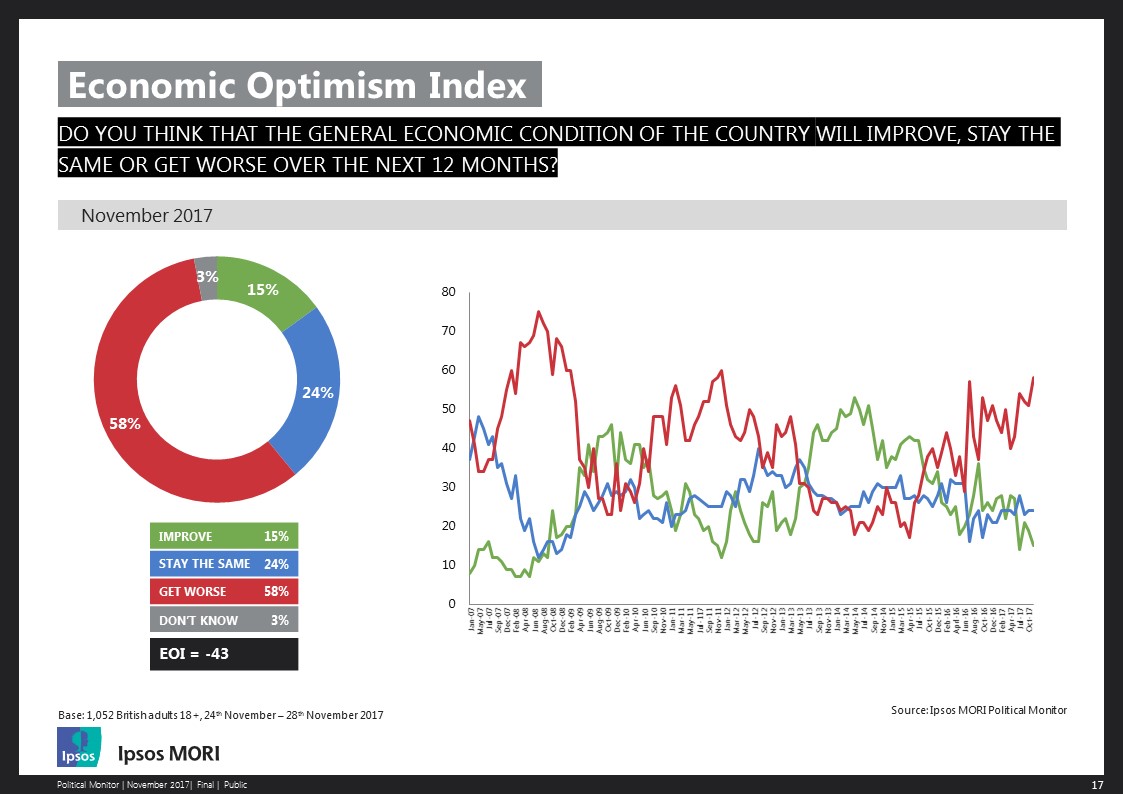 The new Political Monitor also asks the public about the image of both the Conservative and Labour parties. Nearly three-quarters (73% - up 21 points since last year) see the Conservatives as ‘divided’, which compares with the party’s worst score when David Cameron was Prime Minister of 68% in 2013. Twenty-seven percent also say the Conservatives have a “good team of leaders”, down 20 points and again lower than David Cameron’s worst score in 2012 at 36%, and 43% say they are “fit to govern”, down 10 points.

When it comes to Labour they have generally overall improved their positive images over the last year however their ratings are mostly either shy of or not much better than they were under Ed Miliband’s leadership. Three in ten (31%) say Labour has a “good team of leaders”, up 10 points and the highest rating yet under Jeremy Corbyn (it was last at this level in September 2014). Two in five (38%) say Labour are “fit to govern” – 12 points higher than last September but still no better than Labour under Ed Miliband in April 2015. Forty-five percent say they “look after the interests of people like me” (up 13 points to a similar level reached in 2015). Three in five (62%) however say Labour are “divided” –down from 82% last year and the lowest seen since Jeremy Corbyn became party leader. 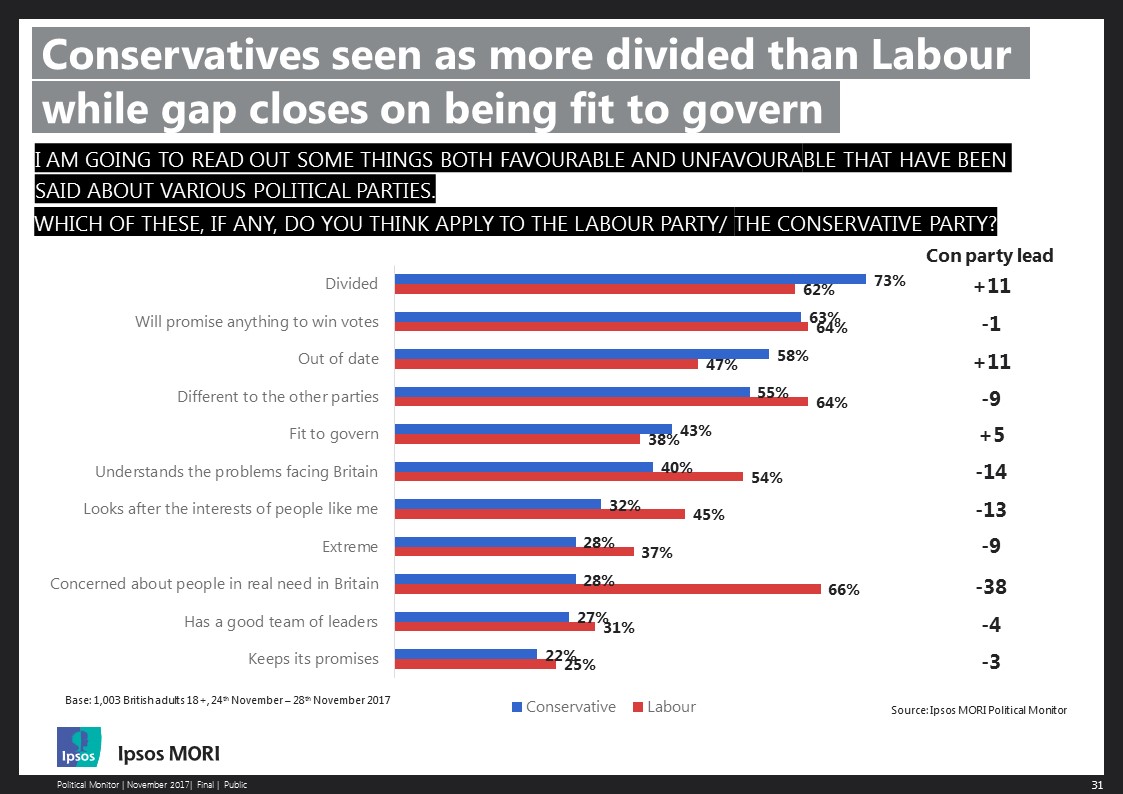 Last year, the Conservatives were ahead on most of our party image measures, but the public’s opinion of the party has fallen since then, especially on perceptions of unity and competence.  Labour is moving in a more positive direction, but has still some way to go to open up a clear lead on being seen as ready for government.

Meanwhile, with public reaction to the Budget neither very good nor very bad, Philip Hammond retains his lead over his rivals as most capable Chancellor in the eyes of the public.  However, with economic optimism falling, so does public confidence in the government’s long-term economic plan.

Ipsos interviewed a representative sample of 1,003 adults aged 18+ across Great Britain. Interviews were conducted by telephone 24th- 28th November 2017.  Data are weighted to the profile of the population.