As the Prince of Wales takes on more roles, such as reading the Queen’s Speech at the opening of State Parliament, new research by Ipsos shows half of Britons expect Prince Charles to do a good job as King (49%), while 1 in 5 do not (20%).  This is similar to the public’s views earlier this year in March. 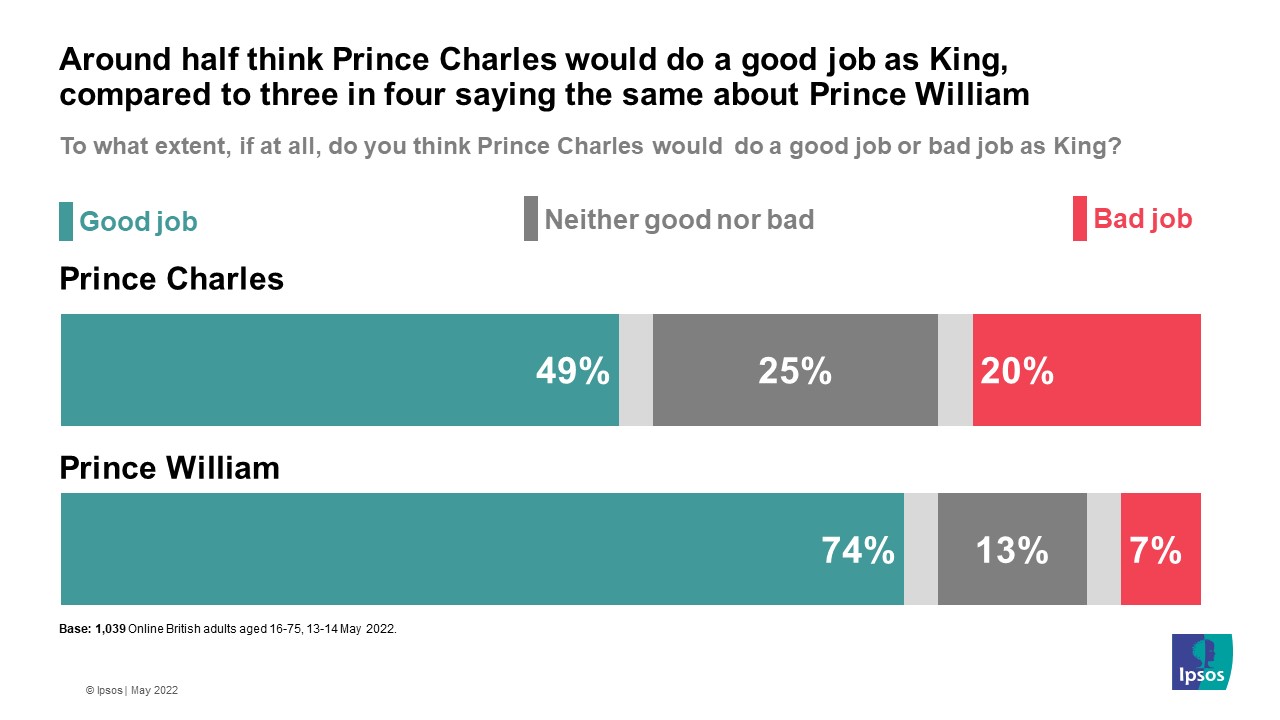 While Britons are more likely to expect good things from the heir than not, expectations for Prince William are even higher. Three-quarters believe the second in-line to the throne will be a successful monarch (74%), only 7% think he will do a bad job.

Despite favourable ratings for Prince Charles and Prince William, most are in no rush to see any change of monarch. Two-thirds (66%) say the Queen should remain in her position for as long as possible while only 23% believe she should abdicate. Overall, Britons are more likely to say the Queen has had a positive impact on the country than a bad one. Almost half (46%) say Britain is better since the Queen came to the throne compared to 20% who say it is the same and 23% who believe it is worse. 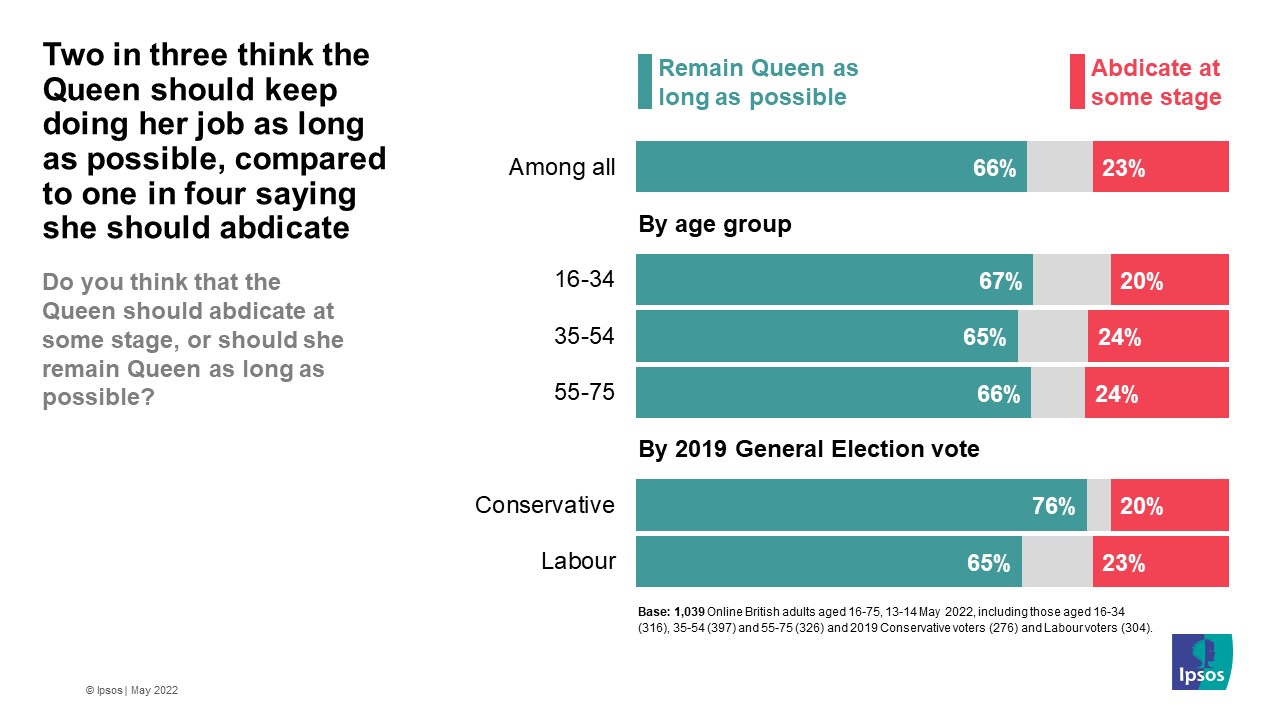 Looking ahead to the reign of King Charles III, what do Britons expect him to achieve if he does take the throne? Seven in 10 (68%) say he is likely to use his position to raise the awareness of climate change and the need to fight it, including 36% who say he is very likely to do so. Over half (55%) say he is likely to become Head of State in the 15 Commonwealth countries where the Queen currently holds this position (including the UK), around a quarter believe this is unlikely (27%). 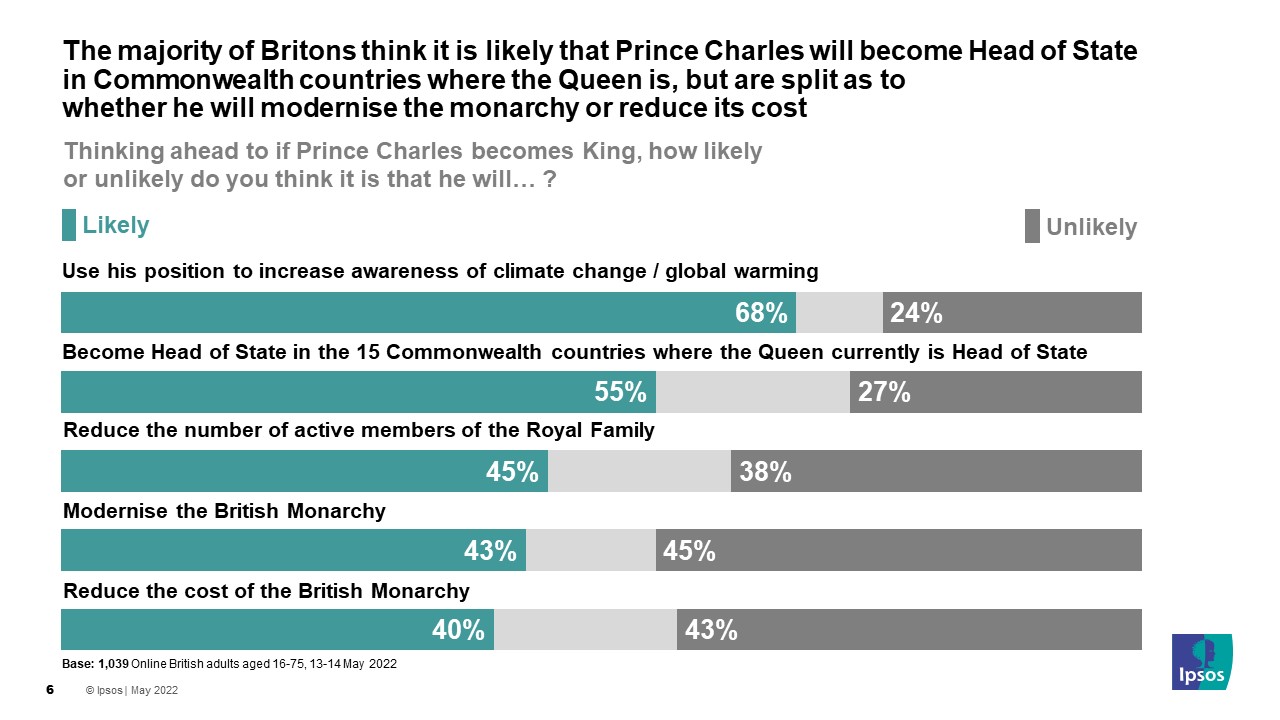 Regarding the monarchy itself, almost half (45%) believe he is likely to reduce the number of active members of the Royal Family, however opinion is split on this with 38% who say he is unlikely to do so. Similarly, Britons are divided as to whether Prince Charles is likely to modernise the monarchy, 43% believe this is probable while 45% do not.

Around 4 in 10 (40%) say he is likely to reduce the cost of the monarchy, 43% disagree. This could be an increasingly important achievement in the eyes of the British public. With the ongoing cost of living crisis, opinion is now split as to whether the Royal Family is an expensive luxury that the country cannot afford. Around 4 in 10 (38%) say this is the case while 36% disagree. Almost a quarter (23%) neither agree nor disagree.  There is a clear age difference on this question – 18-34 year olds are more likely to agree than disagree that the Royal Family is an expensive luxury (by 48% to 22%), but this position is reversed among 55-75 year olds who disagree by a similar margin (53% to 22%).

Kelly Beaver, Chief Executive at Ipsos in the UK, said:

It is promising to see Britons more confident than not that Prince Charles will do a good job as King, and that hopes are even higher for his son Prince William, even while a majority hope the Queen will remain in place for as long as possible.  There is also clearly an expectation that Charles will use his position to increase awareness of climate change.  However, with opinion split as to whether the country can afford the Royal Family – particularly amongst young people – there are other issues that may be more of a test  for the Prince of Wales, particularly whether he will be able to modernise the Royal Family, and demonstrate to the public that it is carrying out its duties as cost-effectively as possible.