While seven in ten UK adults (71%) say they are either living comfortably (25%) or coping (46%) on their household’s income nowadays, around six in ten (59%) are worried about their household’s financial situation, according to the first wave of Ipsos UK’s new Financial Wellbeing Tracker. Furthermore, the proportion of those struggling to cope, who say they are finding it very difficult/difficult to cope on their income has increased 7 percentage points between February and September 2022 – up from 21% to 28%.

The research shows significant divides in concern about household finances across UK society, with this having clear links with life satisfaction.

Five perspectives on the current cost of living

Overall, five segments of the UK population can be identified based on how they feel about their household’s income nowadays and how worried they are about their financial situation. And the sociodemographic characteristics, life satisfaction and financial experiences of these groups all differ significantly. 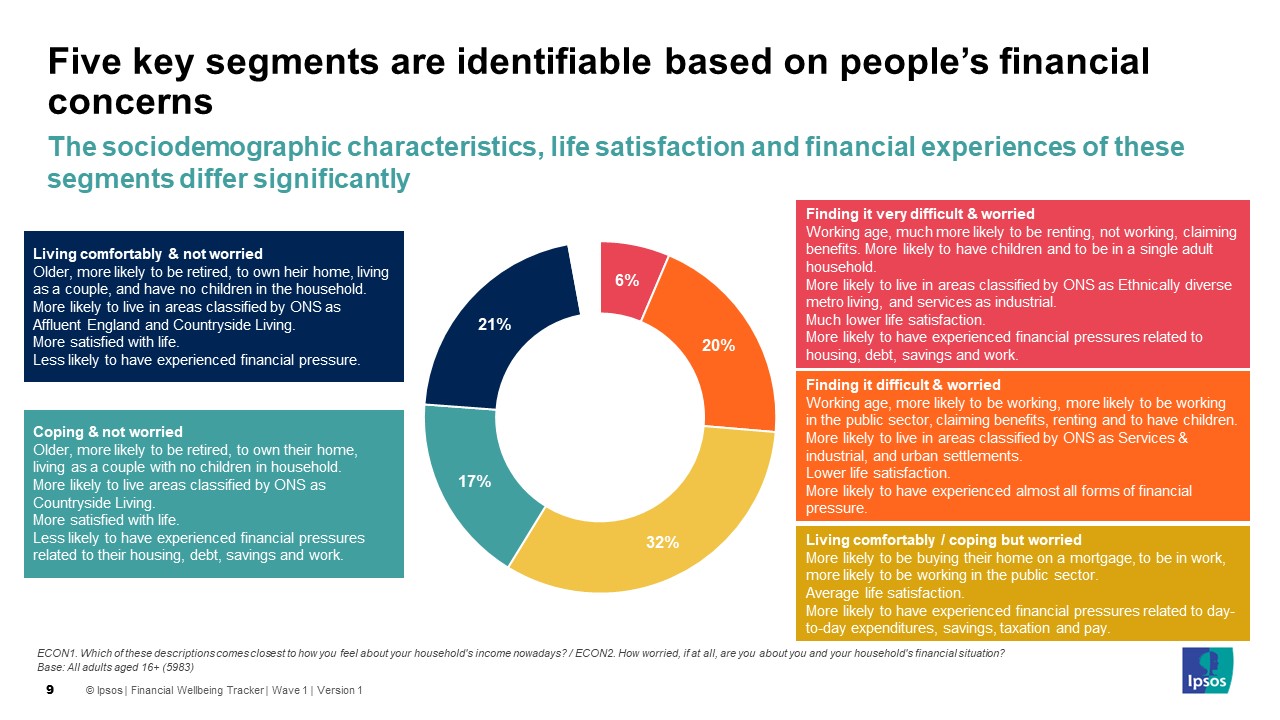 There is a clear gradient of life satisfaction across these groups, with the most vulnerable less satisfied than those who are more comfortable. 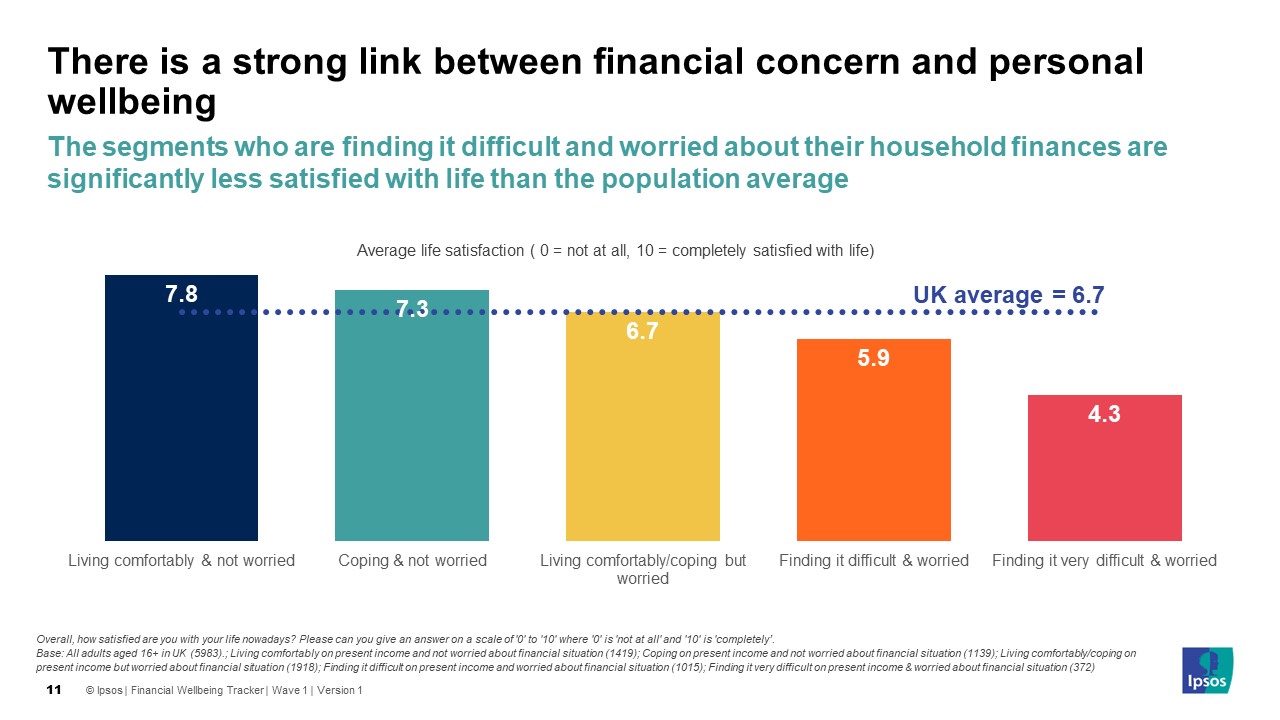 Few people seem to be immune to the change in cost of living, with 93% saying they have noticed an increase in the cost of food shopping, 88% noticing an increase in utilities and 84% an increase in fuel/transport costs.  More financially vulnerable segments tend to be more likely to have experienced other impacts such as increases in housing costs, loan repayments, have gone into debt or had to use savings for day-to-day spending. 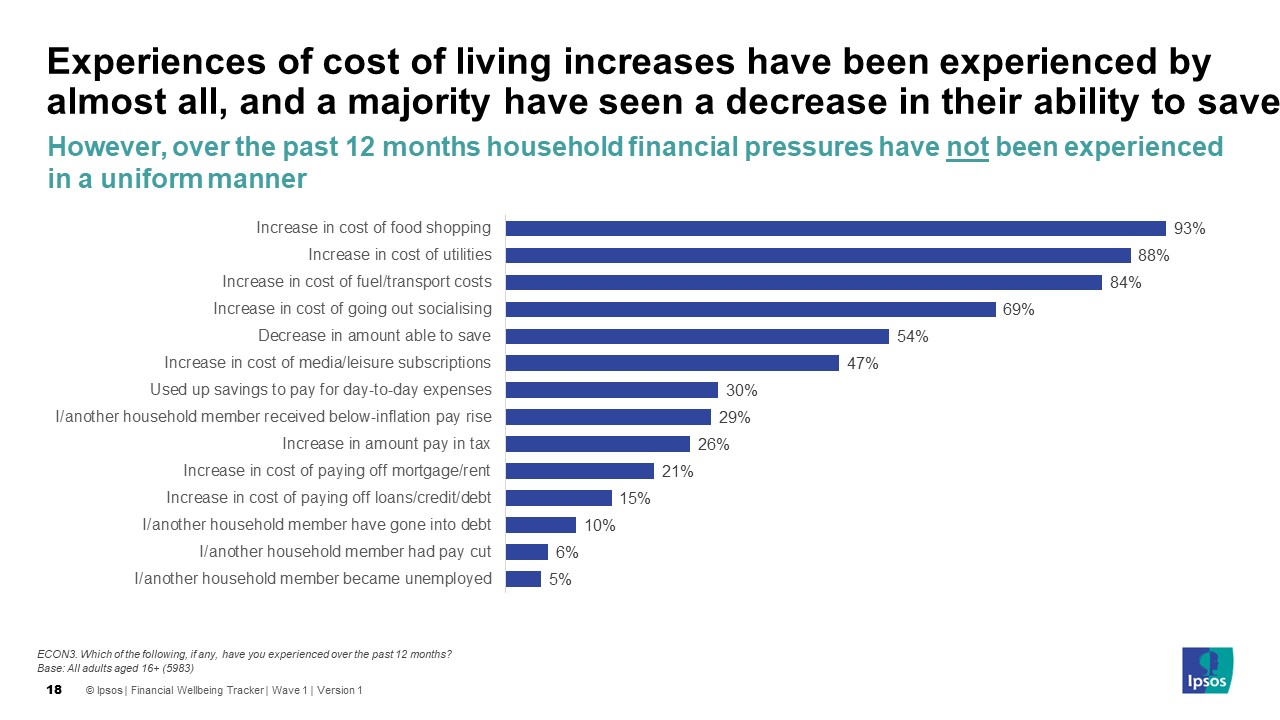 When asked whether the UK economy, the economy of their local area and their household’s standard of living will improve over the next 12 months, a majority of people are of the view that each of these would get worse - with pessimism particularly strong for the UK economy (86%). When it comes to the economy of their local area, 75% feel it will get worse with one in five (20%) saying it will stay the same. Meanwhile, 59% expect their household’s standard of living to get worse (higher among the more vulnerable segments), with more than a third (36%) of the view this will stay the same.

“Our new Financial Wellbeing tracker clearly shows the link between financial resilience and wellbeing, with the most vulnerable – accounting for 1 in 4 adults, mainly people on benefits – experiencing difficulties coping and reporting below average life satisfaction.  Our analysis also shows the stark divide in our society between those able to cope and those who are exposed on multiple fronts.  However, there is also a sizeable squeezed middle group who are just about coping but have widespread concerns for their future. And with public sector workers over-represented among this group, the current debate over public sector pay is set to get louder”.

Technical Note:
Ipsos interviewed online a representative UK sample of 5,983 adults aged 16+ from 22-28 September 2022. This data has been collected by the Ipsos UK KnowledgePanel, an online random probability panel which provides gold standard insights into the UK population, by providing bigger sample sizes via the most rigorous research methods. Data are weighted by age, gender, region, Index of Multiple Deprivation quintile, education, ethnicity and number of adults in the household in order to reflect the profile of the UK population. All polls are subject to a range of potential sources of error.