Labour vote share drops, but no change for the Conservatives ahead of local and European elections 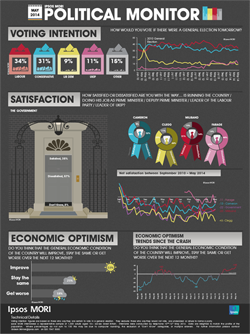 Ipsos’s Economic Optimism Index is at its highest ever point in its 36-year history, according to May’s Ipsos Political Monitor. More than half of Britons – 53% – think the UK economy will improve over the next 12 months, compared with 18% who think it will get worse and 25% saying it will stay the same. This gives an Ipsos Economic Optimism Index score (% improve minus % get worse) of +35, the highest recorded since it began in April 1978. Three quarters of Conservative and Liberal Democrat supporters think the economy will get better (77% and 75% respectively), as do four in ten Labour (41%) and UKIP supporters (39%).

This comes alongside a fall in support for Labour ahead of this month’s local and European elections – although they retain their poll lead. Labour are down three points this month on 34%, with the Conservatives unchanged on 31%. The Liberal Democrats are unchanged on nine percent, while UKIP have fallen four points to 11% - the same proportion they were on in March, having seen a bounce in April following Nigel Farage’s debates with Nick Clegg. 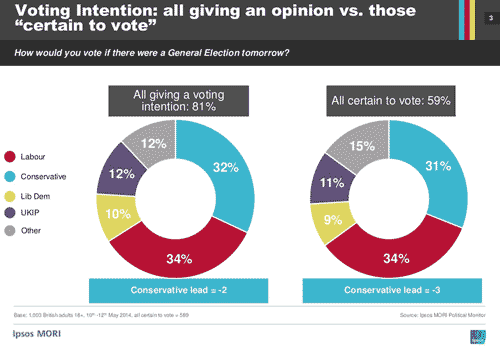 Dissatisfaction with Nick Clegg is at its highest point since October 2012, with two thirds (66%) dissatisfied with his performance as Deputy Prime Minister; just 23% are satisfied giving him a net rating (% satisfied minus % dissatisfied) of -43. 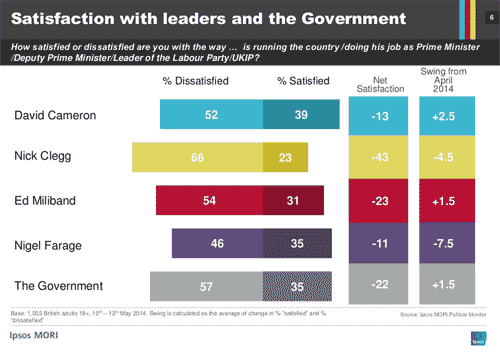 “With a year to go - and only a few weeks to the local and European elections - neither of the main parties will be feeling comfortable.  Labour’s average share this year is down four points from their 2012 average, but the Conservatives are also staying stubbornly in the low 30s, despite the best economic optimism we’ve seen in 36 years of asking the question.”

Ipsos interviewed a representative sample of 1,003 adults aged 18+ across Great Britain. Interviews were conducted by telephone 10th – 12th May 2014.  Data are weighted to match the profile of the population.