Ipsos’s latest Political Monitor shows Boris Johnson and Keir Starmer level with the British public on who would ‘make the most capable Prime Minister’. 38% say Johnson would make the most capable PM and 38% say Starmer. However, just one in four Britons think Labour are ready to form the next government – with 51% disagreeing.

When asked who would make the most capable Prime Minister, 38% say Boris Johnson and 38% say Keir Starmer. Johnson’s numbers have fallen 9 points from 47% in March 2021, whilst Starmer’s have remained largely unchanged (up one point). The narrowing of the gap is largely due to the increase in respondents saying ‘neither’ (up 7 points to 13%). 1% say someone else (unchanged) and 9% say they don’t know (down a point). 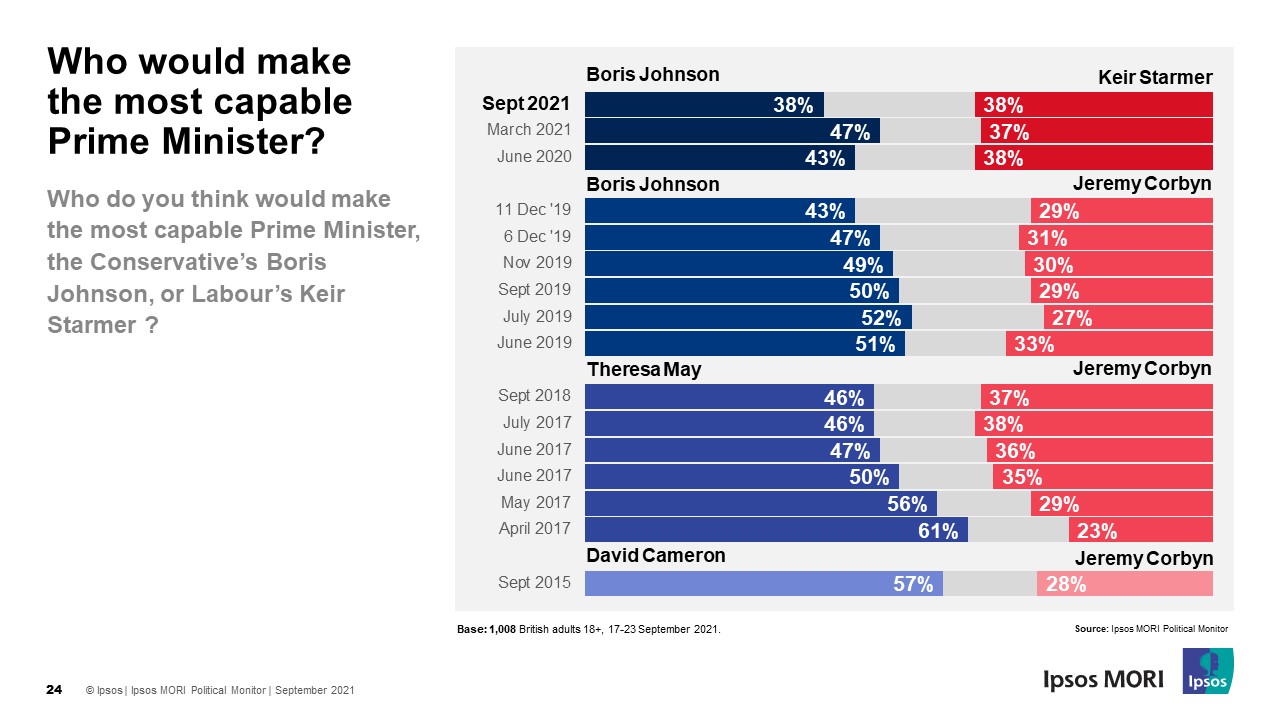 Just 25% think Labour are ready to form the next government (down 7 points from February 2021) with 51% disagreeing (up 8 points). Since Labour have been out of office, the highest scores Labour have achieved under each of their three leaders has been:

Whereas in April ’97, 55% of Britons thought Labour were ready to form a government. 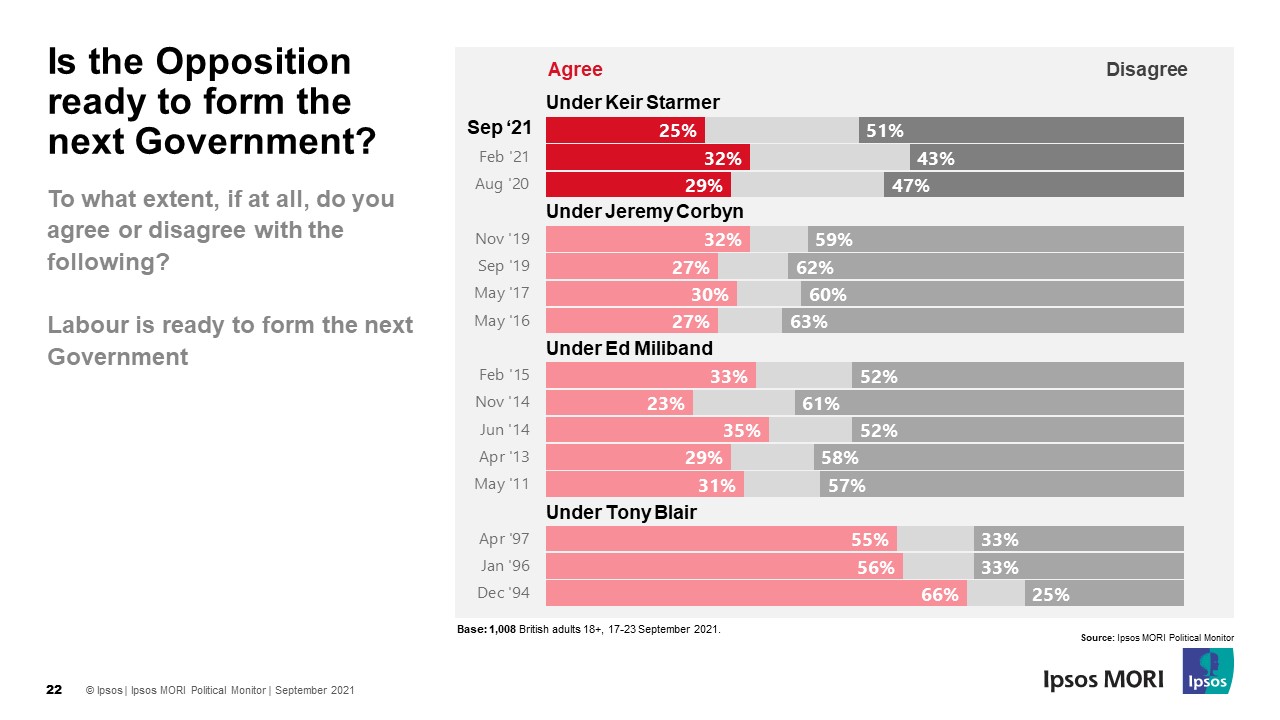 When asked whether a series of attributes apply to the Labour Party: 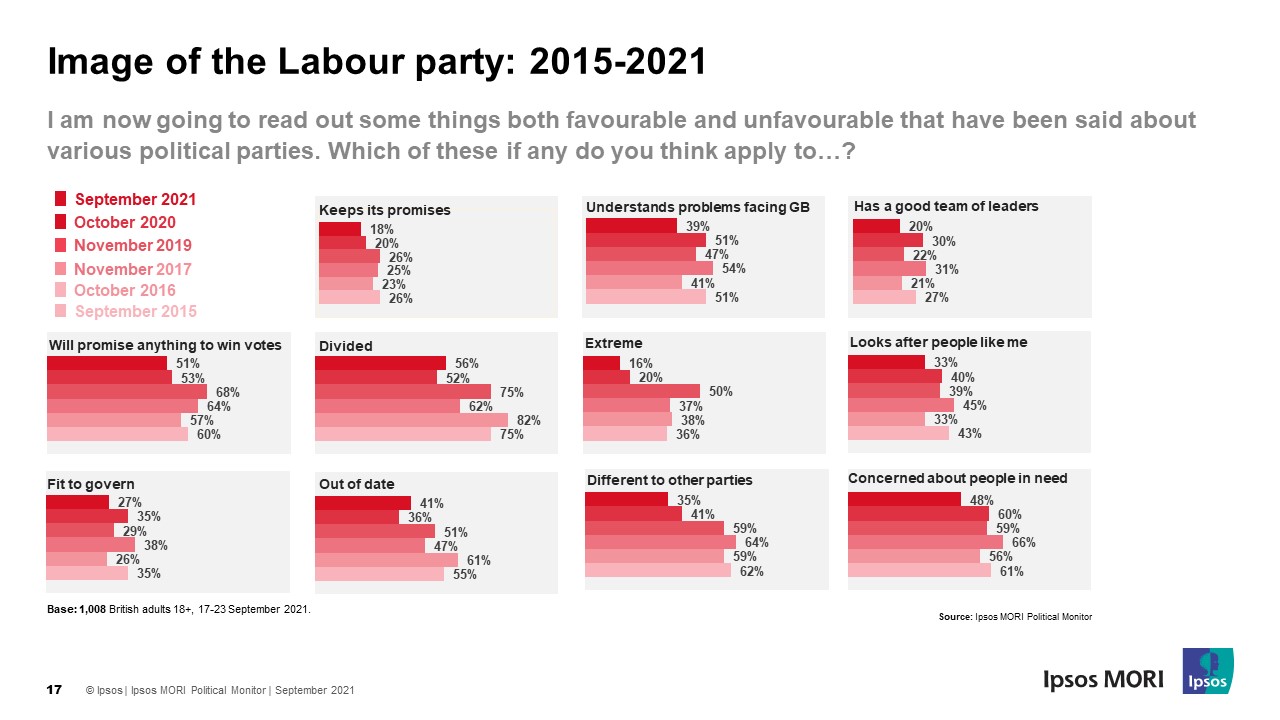 When asked about voting preference the Conservative lead over Labour has fallen significantly since August, with the Tories now holding a slender 3-point lead going into party conference season.

Looking at our political trackers:

Likeability of leaders and their parties

As we enter conference season, the Conservatives seem to be experiencing some mid-term wobbles, with satisfaction with the running of the country dipping (probably due to issues other than COVID-19), and with the lowest likeability scores for the Prime Minister and his party since he became leader. However, while this may have given an immediate boost to Labour in the headline figures, the more detailed data is less rosy, showing a long way for them to go to persuade voters they would be a credible alternative government at the ballot box, while Keir Starmer faces many more critics of his leadership among his own supporters compared with Boris Johnson who has a much happier base.

Ipsos interviewed a representative sample of 1,008 adults aged 18+ across Great Britain. Interviews were conducted by telephone: 17th to 23rd September 2021. Data are weighted to match the profile of the population. All polls are subject to a wide range of potential sources of error.