Record scores for Conservatives as party with best policies, team of leaders, most clear and united

With just three weeks to go until Britain goes to the polls Ipsos’s new Political Monitor shows the Conservatives holding a strong lead despite an improvement for Labour. The Conservatives currently stand on 49% (nc from April) with Labour at 34% (up 8 points), the Liberal Democrats down six to 7% and UKIP with 2%. 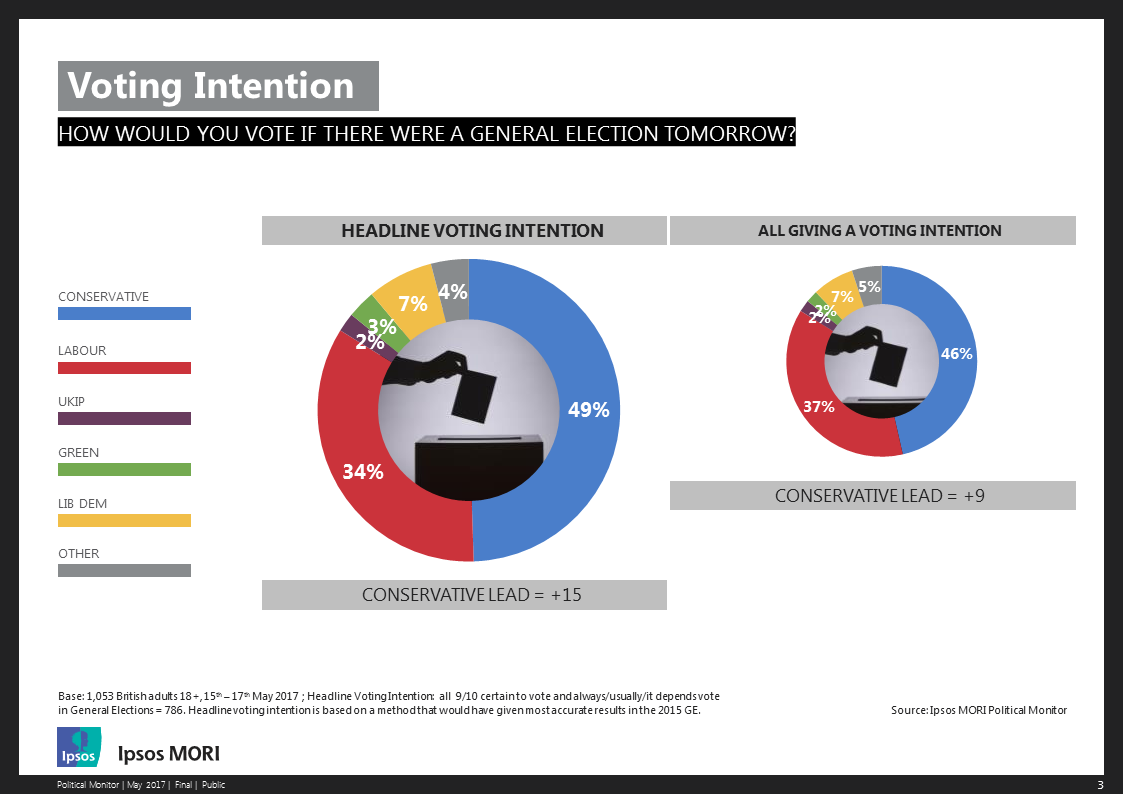 Tim Farron and Paul Nuttall still struggle breaking through with public. Three in ten (28%) are satisfied with the Liberal Democrat leader while two in five (39%) are dissatisfied giving him a net score of -11. One in three however say they have no opinion of Mr Farron. The UKIP leader also grapples with low public satisfaction ratings where 17% say they are satisfied with his performance with a majority (54%) dissatisfied –  giving him a net score of -37 (28% say they don’t know).

When it comes to being the most capable Prime Minister the public still prefer Theresa May – 56% opting for the Conservative leader and three in ten (29%) for Jeremy Corbyn – although this has narrowed from last month when 61% picked Theresa May and 23% Jeremy Corbyn.

The NHS and Brexit are the joint top issues that matter most to Britons when deciding how to vote. Forty-three percent say the NHS is an important issue, climbing 12 points from April – a possible reaction to the recent cyber-attack. Brexit remains steady at 42% (no change from April) followed by education (22%), managing the economy (16%), immigration (12%), and taxation (12%). There’s been a small fall in  the Ipsos Economic Optimism Index with 27% saying the economy will improve in the next twelve months (down 1) and 43% saying it will get worse (up 3) leaving an EOI score of -16 (down 4).

Labour shouldn’t get too carried away by the rise they see in the polls.  The focus on their manifesto may have helped them this week, but on many fundamentals such as leadership the public still puts them a long way behind the Conservatives, and their vote is much softer, with one in six of their supporters considering voting for Theresa May’s party.

Ipsos Political Monitor: May 2017 from Ipsos

Ipsos interviewed a representative sample of 1,053 adults aged 18+ across Great Britain. Interviews were conducted by telephone 15th-17th May 2017.  Data are weighted to the profile of the population (by age, gender, region, work status/sector, social grade, car in household, child in household, tenure, education and newspaper readership).