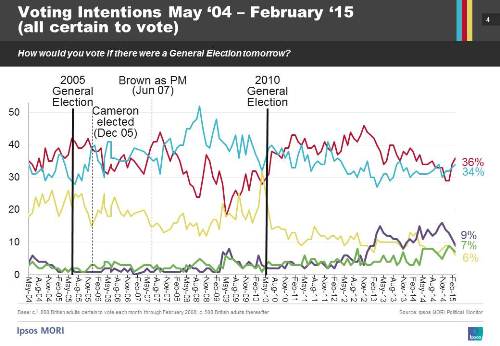 Support for UKIP has also fallen - Nigel Farage’s party are now on 9% of the vote, their lowest share since November 2013. Satisfaction with Mr Farage himself has also declined as the general election approaches; net satisfaction in his performance as UKIP leader (% satisfied minus % dissatisfied) is now at -23, down from -4 back in October. Three in ten (30%) are satisfied with Mr Farage, while 53% are dissatisfied, giving him approval ratings well below those of the Prime Minister (though still higher than for Ed Miliband and Nick Clegg). 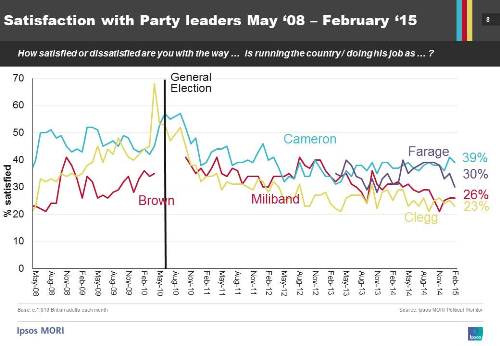 More now think Ed Miliband and the Labour Party are ready for government than in November, when there were rumours of a leadership challenge, though the majority still do not think they’re ready. One in three (33%) think Labour is ready to form the next government and 21% think Ed Miliband is ready to be Prime Minister, up from 23% and 13% respectively. More than half each still disagree that Mr Miliband (63%) and his party (52%) are ready for government, however. 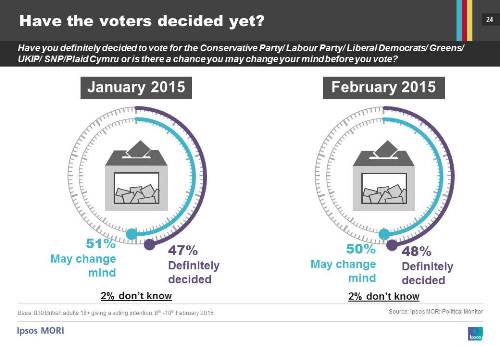 “After their troubles in 2014, it seems that the big two parties may be reasserting themselves, as the battle between them dominates the agenda (although the Liberal Democrats still struggle, and slip further behind). But with half saying they may change their mind, there is still time for further twists if the campaign spotlight shifts.”

Ipsos interviewed a representative sample of 1,010 adults aged 18+ across Great Britain. Interviews were conducted by telephone 8-10 February 2015.  Data are weighted to match the profile of the population.