Conservatives hold a lead on economic credibility over Labour CON 33 (-1); LAB 34 (-2); LIB DEM 8 (+2); UKIP 13(+4); GREEN 6 (-1)  With less than two months to go before the General Election the latest Ipsos Political Monitor shows the Conservative and Labour parties running neck-and-neck with both parties’ vote share decreasing since last month. Labour’s vote share decreased by two points to 34%, while the Conservatives lost one point holding at 33%. The Liberal Democrats gained some ground from February increasing by two points to 8%. UKIP made a substantial gain of four points reaching 13% while the Greens are down one point on 6%. 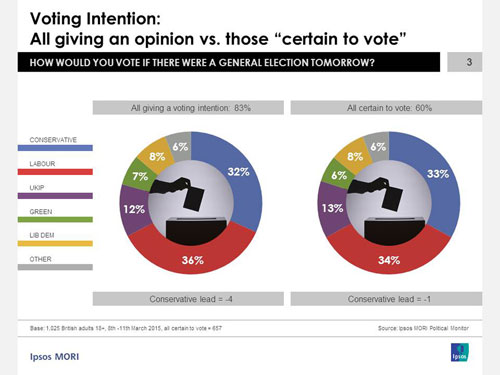 David Cameron maintains a higher net satisfaction level (% satisfied minus % dissatisfied) with -16 (38% satisfied and 54% dissatisfied) over Ed Miliband with -31 despite Mr Miliband gaining some ground since February (up from -35 in February). Nick Clegg remains the least popular leader with a net satisfaction level of -36 while Nigel Farage has become the most popular leader with a score of -12 (up from -23 in February). Healthcare remains the dominant issue for the third consecutive month for Britons when determining their choice of party with just under four in 10 (38%) saying it’s a very important issue for them – although this has decreased from 45% In February. The economy remains the second most important issue with nearly one in three (31%; down from 32% in February) mentioning this, while one in four mention education (25%, unchanged from February) and immigration (25%, up 3 points from February).  Ahead of George Osborne’s election budget next week the public are showing signs of economic optimism with four in ten (41%) saying Britain’s economic condition will improve over the next 12 months and 20% saying it will worsen. The Government also appears to be gaining greater economic credibility. More than half (56%) say the Government has done a good job at managing the economy (up from 47% in March 2014) while most agree (53%) that the Government’s policies will improve the state of the economy in the long-term.

Our figures show that Labour have some ground to gain in improving their economic credibility. 37% believe that a government under Ed Miliband and Ed Balls would do a worse job than the present government at managing the economy (against 19% who say they’d do a better job) and when asked who would make a more capable chancellor, more Britons select George Osborne (41%) than Ed Balls (30%).

In spite of public economic confidence, most believe now is not the time for tax cuts with one in two (50%) saying Mr Osborne should not announce tax cuts in next week’s budget against 40% who believe he should.

"It’s clear which party has the lead on macro-economic credibility, with several of these figures being the best for any government since the crash.  George Osborne’s satisfaction scores are better than any chancellor since Gordon Brown in 2006 and any Conservative chancellor since Nigel Lawson in 1987. Even three in ten Labour voters think the Government has laid strong economic foundations, although they still want a change.  But despite this the Conservatives are still stuck in the same story – neither of the two main parties are able to open up a commanding lead in the vote.”

Ipsos interviewed a representative sample of 1,025 adults aged 18+ across Great Britain. Interviews were conducted by telephone 8-11 March 2015.  Data are weighted to match the profile of the population.