Theresa May is enjoying a warm honeymoon welcome with the public according to Ipsos’s latest Political Monitor. More than half (54%) say they are satisfied with Ms May’s performance in her first month as PM while one in five (19%) say they are dissatisfied – leaving her with a net satisfaction score of +35. This is comparable to her predecessor David Cameron’s rating in June 2010 when 57% were satisfied with him doing his job as PM and 26% dissatisfied. Although higher than those of John Major and Gordon Brown in their first month as Prime Minister, May’s satisfaction ratings are still behind Tony Blair’s first month back in May 1997 (65% were satisfied and 5% dissatisfied).

The new poll reveals that Jeremy Corbyn continues to struggle with public approval. One in four (25%) say they are satisfied with Mr Corbyn doing his job as leader of the Labour party and 58% are dissatisfied – leaving him a net satisfaction score of -33. Although better than last month when the Labour leader had a net score of -41 he is still well behind Ed Miliband’s rating after his first year as leader in September 2011 (31% were satisfied and 47% dissatisfied).

More encouraging for May are the satisfaction ratings she enjoys amongst supporters of both her own and the Labour parties. Three in four (76%) Conservative supporters are satisfied with Ms May (4% dissatisfied) as are 45% of Labour supporters (29% dissatisfied). Jeremy Corbyn’s ratings amongst his own party are lower than they are for Theresa May with two in five (39%) satisfied and 47% dissatisfied. 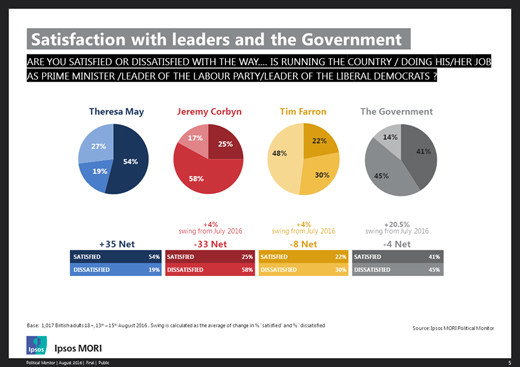 Voting intention figures show the Conservatives widening a lead over Labour to their highest since 2009. The Conservatives currently stand at 45%, compared with Labour at 34%, the Liberal Democrats at 7% and UKIP at 6%. 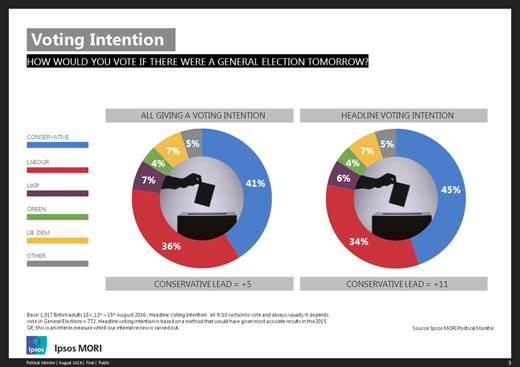 “It’s not unusual for a new Prime Minister to experience a honeymoon with voters, even if it doesn’t last, and Theresa May certainly seems to be enjoying one. What is notable though is the extent of her lead over her opponent Jeremy Corbyn in the way the public rates them in doing their job.”

Ipsos interviewed a representative sample of 1,017 adults aged 18+ across Great Britain. Interviews were conducted by telephone 13th- 15th August 2016. Data are weighted to the profile of the population.