Ipsos’s April Political Monitor shows that for the fourth consecutive month the NHS leads as the top issue for the British public when considering who they’ll vote for. Followed by the NHS are managing the economy, education, asylum and immigration, taxation and benefits. 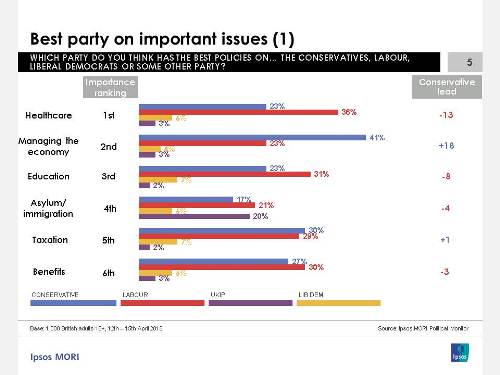 Nearly half of all Britons surveyed (47%) say the NHS and healthcare is their top concern when deciding how they’ll vote. This is a slight boost from March’s Political Monitor’s figures when 38% mentioned the NHS (although it reflects similar levels to and February after the A&E crisis). Managing the economy has seen a boost of 4 points from March figures (up to 35%) while education remains at a similar level of importance at 24% (down one point from 25% in March).

One in five Britons (19%) mention asylum and immigration as an issue helping them determine who they’ll vote for, down six points from March (25%). Following last month’s budget announcement taxation appears to be more of a concern with 16% mentioning this issue (up six points from 10% in March). Benefits rounds off the top six voting priority issues with one in nine Britons (11%) saying this will be very important.

While Labour holds a slight lead over the Conservatives on asylum and immigration (21% compared to 17%) UKIP only trail by one point where one in five Britons (20%) say they have the best policies on the issue.

"Of the key issues to voters, the Conservatives only have a strong lead on one – but it is an important one, the economy.  Just as striking is that Conservative and Labour supporters both feel strongly that their party is the best on both healthcare and the economy – another sign that switching between the big two may be overshadowed by other stories this election."