One in three people in the UK (34%) say they’ve seen or heard messages discouraging the public from getting a coronavirus vaccine, and anti-vax voices are using social media to amplify their messages, a new study has found.

The research, by King’s College London and Ipsos, also reveals that a notable minority believe conspiracy theories about a COVID-19 vaccine – with belief especially high among younger people and those who get a lot of information on the pandemic from social media platforms.

And while relatively few believe conspiracies about the direct health impacts of a vaccine, worryingly large proportions of the population say they’re unsure if they’re true or false.

The findings are based on 2,244 interviews with UK residents aged 16 to 75, carried out online between 20 and 24 November.

While a third of the country report being exposed to anti-vax messages about a coronavirus vaccine, this rises to nearly half (46%) among those aged 16 to 34.

Facebook is by far the top source of such messages, with one in five Britons (20%) saying they’ve seen this kind of content on the social network. 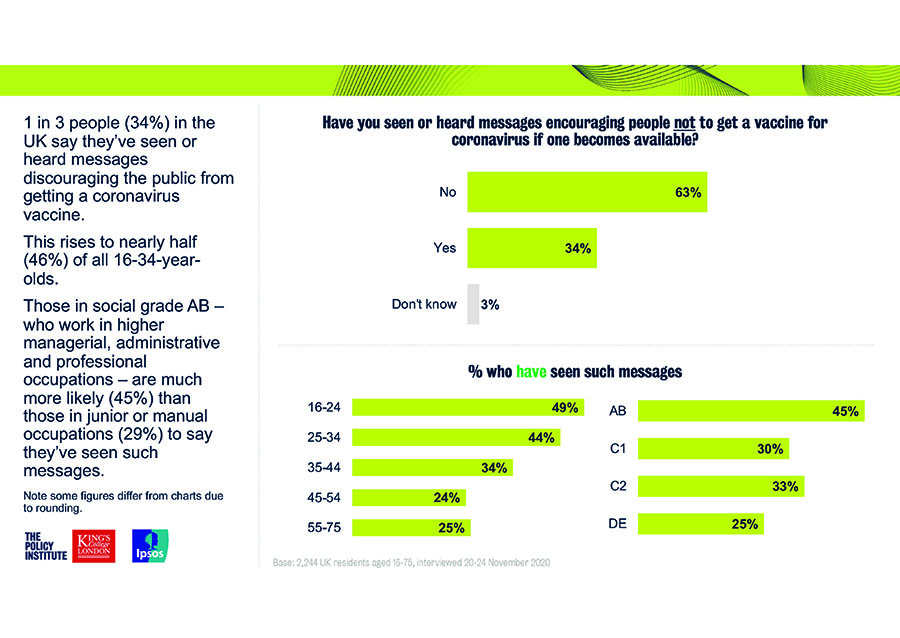 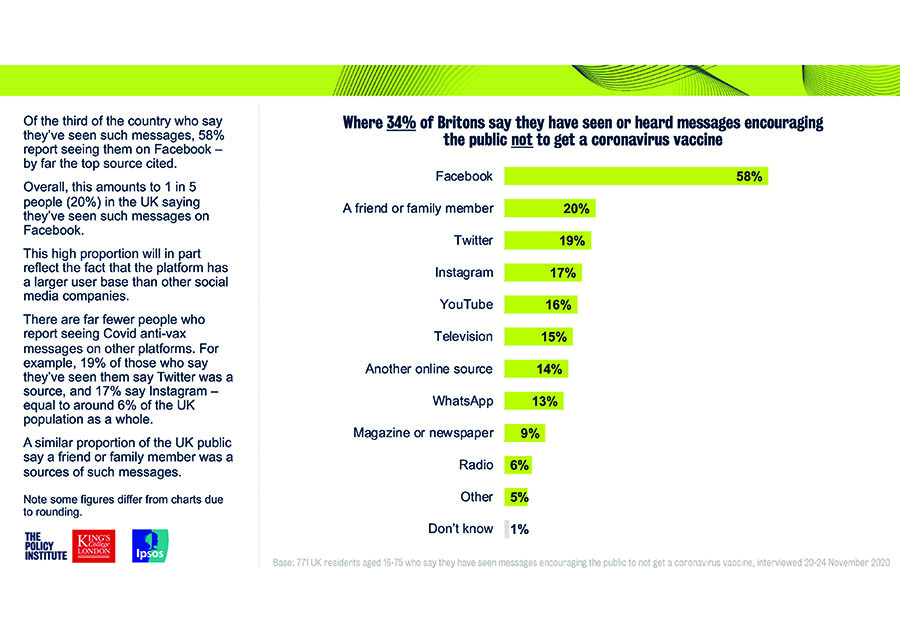 Overall, a quarter of the population (26%) say they’ve seen or heard COVID-19 anti-vax messages on social media. Those who have been to exposed to such posts online are most likely to say they originated from someone they know, with around one in nine people (11%) saying they were shared by a friend or family member.

The UK public are much more likely to think various conspiracy theories about a coronavirus vaccine are false than true – but a notable minority say they believe them, and social media users and younger people are particularly inclined to think such claims are true.

For example, one in seven (14%) believe the real purpose of a mass vaccination programme against coronavirus is simply to track and control the population. This rises to a quarter (27%) of 16- to 24-year-olds.

People who get a great deal or fair amount of information on COVID-19 from WhatsApp (42%) and YouTube (39%) are around three times as likely to believe this. Those who use Twitter (29%) and Facebook (28%) in this way are also more likely to think it is true.

The same pattern is seen in belief in a range of conspiracies:

And while those who believe particularly damaging conspiracy theories about the health impacts of a COVID-19 vaccine make up a smaller minority, there is still a high degree of uncertainty about these extreme claims:

There is a high level of support for at least some kind of active response from social media platforms or regulation from government to combat the sharing of anti-vax content.

Two-thirds (67%) of the public are in favour of such platforms making it easier to find and read scientific evidence on vaccines, such as articles by experts and scientists. The same proportion support financial penalties for companies who fail to remove false information about vaccines.

One in three people say they’ve seen or heard messages discouraging people from getting vaccinated against COVID-19, with social media being the prime source. And it’s clear that some harmful views have taken hold among a minority of the public. They range from concerns about whether the UK government will ensure the safety of the coronavirus vaccine, to particularly extreme conspiracy theories, such as that the real purpose of the vaccination effort is to track and control the population – which is believed by one in seven, and greater proportions of young people and social media users.
Working with social media platforms to control the spread of misinformation is therefore an important action – but the main focus should not be on this niche belief in extreme conspiracies. People who believe in these theories still form a small minority, and many of them will be very difficult to convince. Instead, we need to focus on the much larger sections of the public who say they’re unsure about the truth of some of the medical implications of vaccination – such as the 42% who say they don’t know if it may cause autism in children and the 48% who are unsure whether it might cause infertility. As we start on the very long process of vaccinating as much of the population as possible, addressing this uncertainty through transparent, consistent and inventive public health communication will be essential.

The proliferation of anti-vax material that is being seen by people on social media – particularly young people – and its impact on their views is incredibly concerning in the week where we’ve seen the UK vaccinate the first person outside of a trial in the world. The public are obviously concerned about this, as we see in their high levels of support for regulation of social media platforms, including fines for companies who fail to remove false information. Vaccines have been one of the greatest medical interventions over the last two centuries. We cannot afford to take a backwards step.

Ipsos interviewed a sample of 2,244 adults aged 16-75 in the United Kingdom using its online i:omnibus between 20 and 24 November 2020. Data has been weighted to the known offline population proportions for age within gender, government office region, working status, social grade and education. All polls are subject to a wide range of potential sources of error.