Despite the conversation had by the Duke and Duchess of Sussex with Oprah Winfrey last week about their time as active Royal members, two surveys by Ipsos, completed before and after the interview, show it has done little to alter British opinions towards the monarchy. 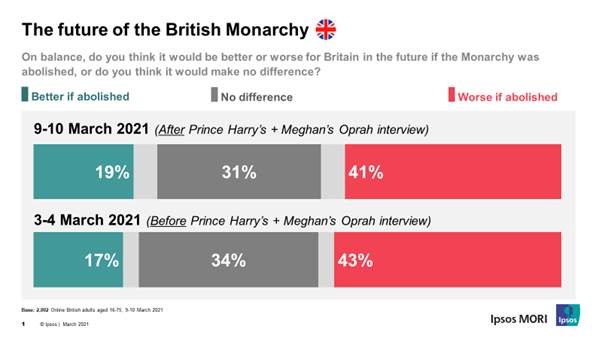 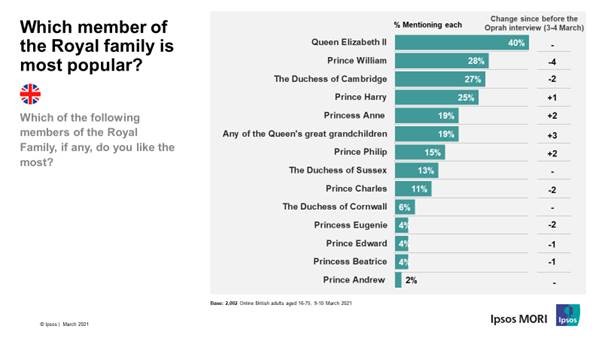 There is also little change in how people view the UK because of the Royal Family. Before the interview, Britons were most likely to see the UK as traditional (59%), now, 57% say the same. The proportion of those who see the UK as powerful thanks to the monarchy falls by 8 percentage points to 20%. 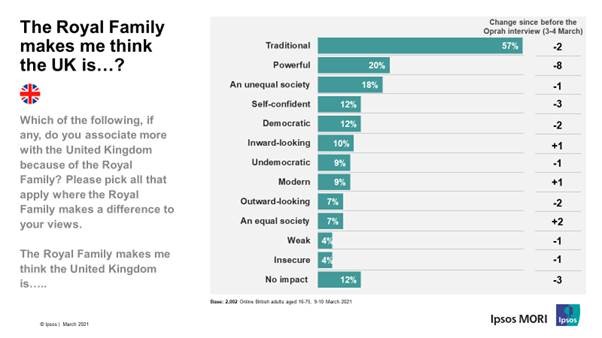 Other associations see little change, including being an unequal society (-1), self-confident (-3), democratic (-2) and modern (+1).
In the US, opinions largely align with those in the UK. However, there are significant differences in the proportions of those who view the UK as traditional as a result of the Royal Family, 57% in the UK make this association while only 41% in the US feel the same.

Direct impact of the interview

Opinions in the US also see only a minority saying the interview has changed their views, although with a different balance of opinion towards  Prince Harry and the Duchess of Sussex, with more saying it has made them more favourable than less favourable (by 28% to 13% and 26% to 16% respectively).

A quarter of those in the US view the monarchy as an institution less favourably (26%, 5% more favourably), while 3 in 10 (29%) have a more negative view of the British media as a result of the interview (4% more favourably). Again though just over a third (35%) say the interview has made no difference to their opinion of the monarchy as an institution, 31% say the same about the British media.

Despite the contents of the interview and the resulting coverage and analysis in the media, the Duke and Duchess of Sussex’s interview with Oprah Winfrey appears to have done little to harm attitudes towards the monarchy here in the UK in the immediate aftermath, with Britons just as likely to worry about the role of the British media.