Public Attitudes to Science (PAS) 2014 is the fifth in a series of studies looking at attitudes to science, scientists and science policy among the UK public. Ipsos conducted the study in partnership with the British Science Association, on behalf of the Department for Business, Innovation and Skills (BIS) and the Economic and Social Research Council (ESRC).

For the first time in the series, PAS 2014 uses social listening and online research with the Ipsos Connects online community, alongside the nationwide face-to-face survey, to build a picture of how the public engages with science online as well as offline. Also for the first time, it explores public attitudes towards four of the Government’s Eight Great Technologies: big data, agri-science, robotics and emerging energy technologies, such as fracking to extract shale gas.

The study shows that the UK public are as enthusiastic about science as they ever have been, with attitudes to science having come a long way over the past 25 years:

By the same token, people hold scientists and engineers in high regard. Nine-in-ten think that scientists (90%) and engineers (88%) make a valuable contribution to society and both are viewed on balance as creative, interesting and open-minded people.

However, many still do not know how scientists go about their work. A third (35%) still think that scientists adjust their findings to get the answers they want, and three-in-ten (29%) think scientific research is never or only occasionally checked by other scientists before being published.

Ultimately, PAS 2014 strongly underlines the importance of engaging the public with science, to address people’s concerns and deal with any misconceptions. Half (51%) still say they hear and see too little about science. Seven-in-ten (69%) think that “scientists should listen more to what ordinary people think” and three-quarters (75%) think that “the Government should act in accordance with public concerns about science and technology”. 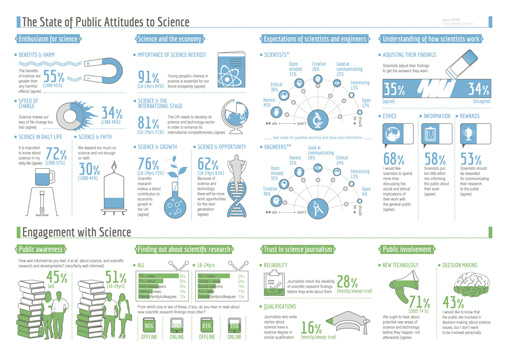 Watch a video of participants in the qualitative research discussing how they think the public could become more engaged with science.

Ben Page: What to Expect from Public Attitudes to Science 2014

“It is encouraging to see such a steady growth in support for science in recent years. Not only are people in support of the role science plays in our economy, but many see the intrinsic value in academic scientific endeavour and recognise science as an important part of our culture.”

“We want Britain to be seen as a scientific nation, and to see itself as one – to pride ourselves on our economy, our culture, and our education system being intertwined with scientific success. The PAS survey is therefore incredibly important in providing evidence of what we’re doing well and what we need to do better when it comes to making sure people feel engaged with science.”

“It is great to again see the public’s positivity towards science and appetite to know more. Wellcome supports an exciting range of engagement activities that bring science, scientists and the public together. PAS 2014 reports that two-thirds of people have gone to this sort of event in the previous year, although we must work harder to reach less affluent groups. It is disheartening to see that almost twice as many women than men think that school put them off science; efforts to address this must be improved with some urgency.”

As part of the wider Public Attitudes to Science project, Ipsos was commissioned by Economic and Social Research Council (ESRC) and the Office for National Statistics (ONS) to conduct a public dialogue examining the public’s views on using linked administrative data for research purposes.

A series of standalone reports have been created covering the findings of the social listening (key findings are also summarised in the overall Main Report):

PAS 2014 employed a mix of methodologies, including: