New Ipsos polling shows the British public are split on US President Barack Obama expressing his view on whether or not Britain should stay in the European Union. Half (49%) think that President Obama should express his view while 46% say that he should not. 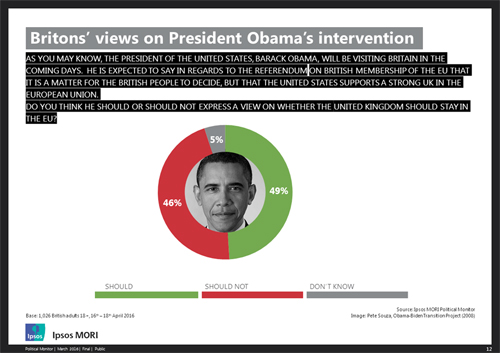 “President Obama may not change the minds of many leave supporters – indeed they want him to stay out of the debate. But he could play a bigger role in bolstering the views of those already leaning towards Remain.”

Ipsos interviewed a representative sample of 1,026 adults aged 18+ across Great Britain. Interviews were conducted by telephone 16-18 April 2016. Data are weighted to match the profile of the population.