“Remain” still ahead although lead has narrowed

Two in five still to make up their minds

As the clock ticks down towards the referendum on European Union membership Ipsos’s latest Political Monitor reveals a majority still want to remain in the EU although the gap between stay and leave is narrowing. When asked the referendum question “should the United Kingdom remain a member of the European Union or leave the European Union?” 55% say they wish to remain (down 3 points from December) and 36% want to leave (up 4 points) giving a 19 point gap between remain and leave (a 3.5 point swing to leave). Our long-term trend question also shows the difference getting closer with exactly half (50%) the public now saying they would vote to remain an EU member and nearly two in five (38%) voting for Brexit – leaving a 12 point gap (a 2.5 swing). 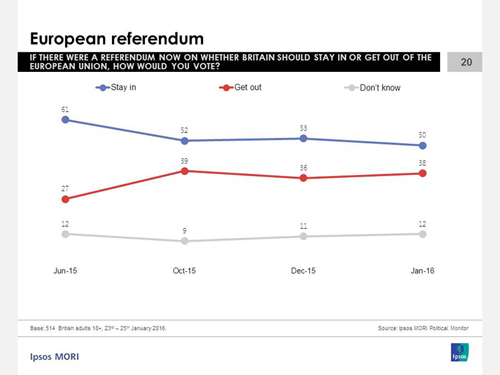 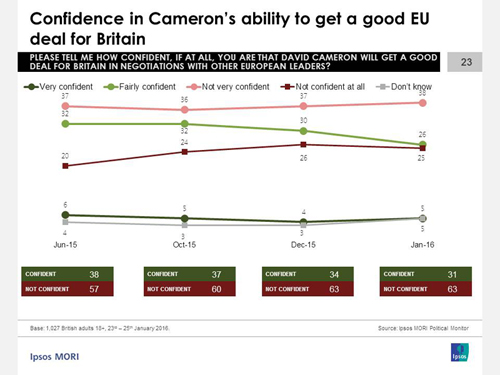 As rumours circulate in the media that David Cameron may be close to a deal with other European leaders confidence remains low amongst the public that he will achieve a good deal. Just three in ten (31%) are confident in the Prime Minister (down three points from December and six points from October) with 63% not confident (no change from December and up three points from October). The Prime Minister’s own party is evenly divided on their leader’s negotiation ability in Europe. Forty-eight percent of Conservative supporters are confident he will achieve a good deal while 49% are not. This compares to just one in four (25%) Labour supporters who have confidence in Mr Cameron and 72% who do not. 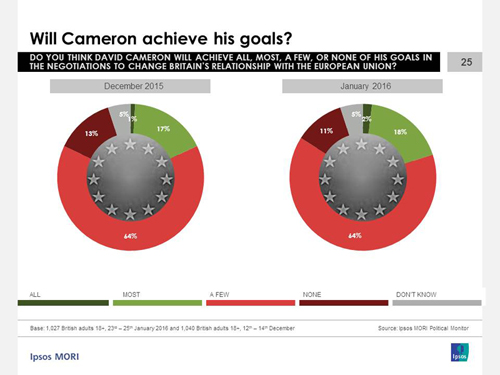 When asked how many of his goals that the Prime Minister will achieve in his negotiations two in three (64%) believe he will accomplish ‘a few’ while 18% think ‘most’ and just 2% think ‘all of them’. One in nine (11%) Britons believe he won’t achieve any of them.

“The ‘stay’ camp are still ahead among the public, even though their lead has narrowed. This is despite the fact that few on either side think the Prime Minister will achieve most of his goals in the negotiations. But with so much still to decide – from the outcome of the negotiations to the date of the referendum itself – it is perhaps not surprising that many are still to make up their minds, Conservative voters most of all.”

Ipsos interviewed a representative sample of 1,027 adults aged 18+ across Great Britain. Interviews were conducted by telephone 23-25 January 2016. Data are weighted to match the profile of the population.