Ahead of the local elections across parts of the country next month, new research by Ipsos shows half of Britons say the conditions of roads and pavements are most in need of improvement (50%) in their local area, while 4 in 10 (39%) say affordable decent housing needs to be enhanced. 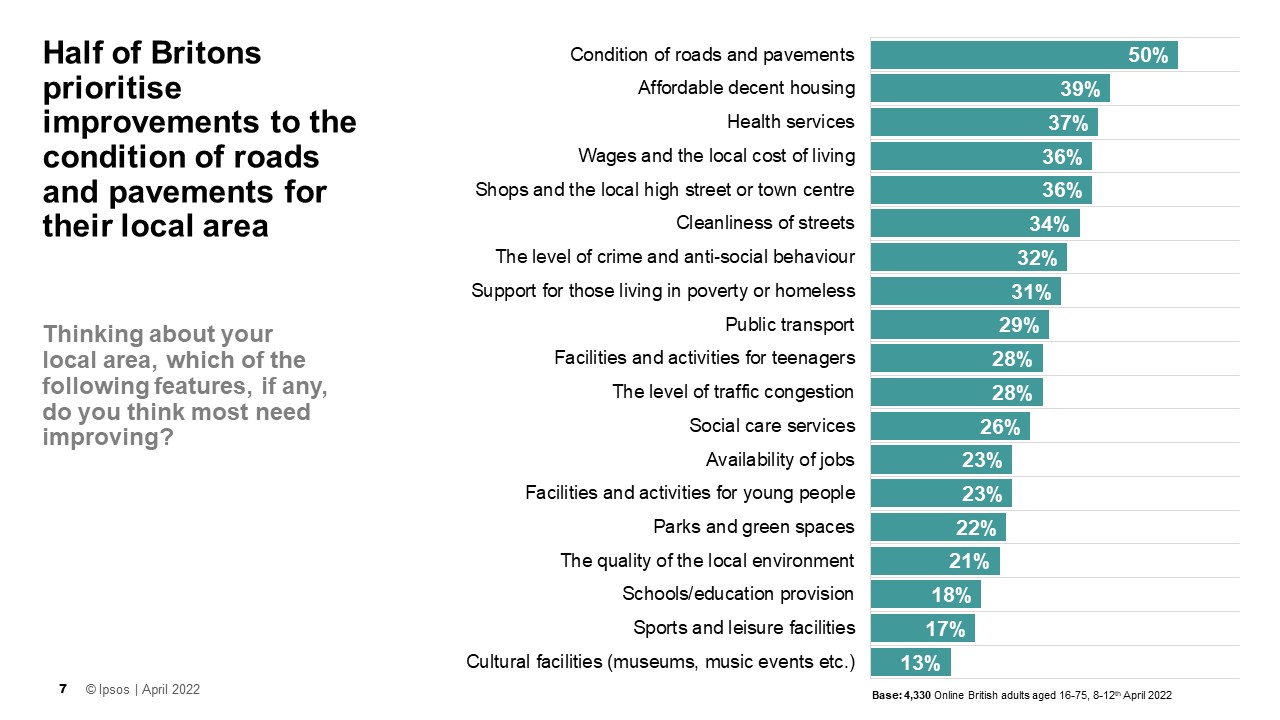 The public’s priorities also include improvements in health services (37%), wages and local cost of living (36%), shops and the local high street/town centre (36%), and cleanliness of streets (34%) in their local area.

Public opinion is split when it comes to satisfaction with their local council’s actions to improve their local area. Around a third (34%) are satisfied while 31% are not. Those in the South West and London are slightly more likely to be satisfied with this (both 40%) while those in Scotland are least satisfied (26%). 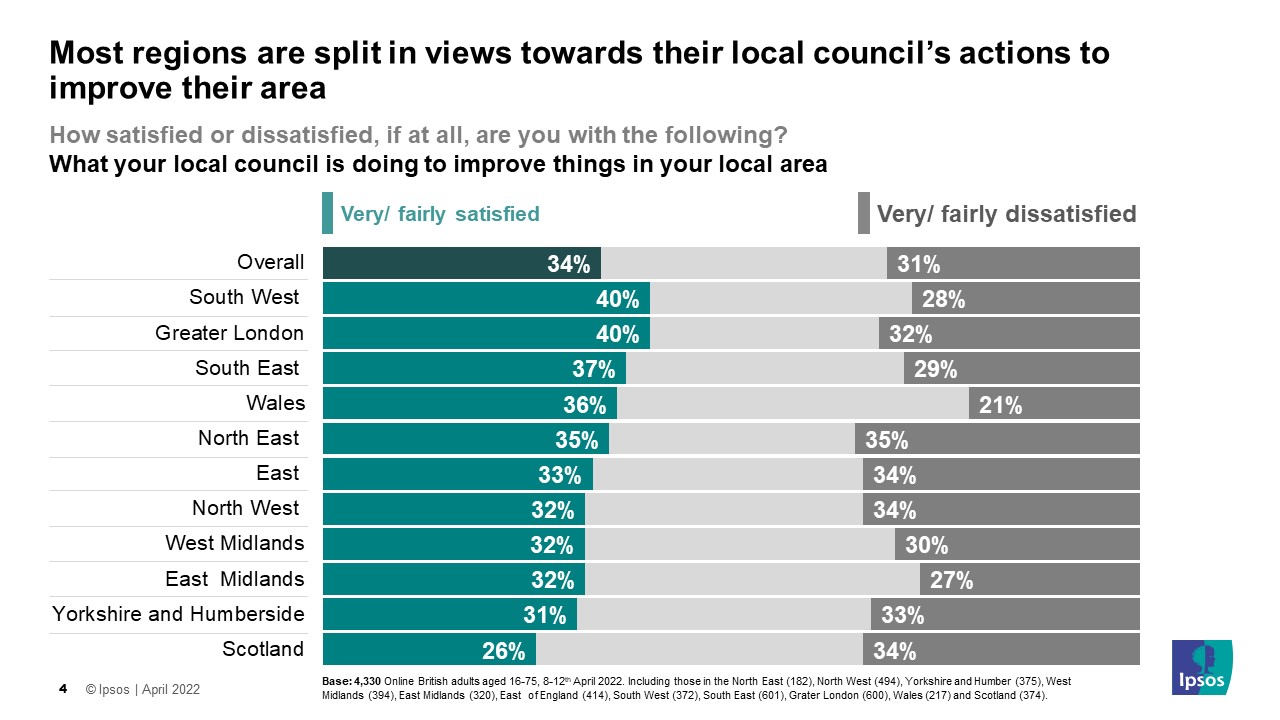 Despite split opinion on their local council, most are satisfied with their neighbourhood as a place to live (75%), and satisfaction is even lower when it comes to the UK Government, only 24% are happy with what it is doing to improve things in their area.

Most regions are more likely to say their local council provides poor than good value for money, overall, 39% say it is poor compared to only 26% who say good value. The pattern is similar in most regions, with 4 in 10 or more dissatisfied with the value provided by their local councils  in the East Midlands (45%), Yorkshire and Humberside (44%) and Scotland and the North East (both 43%). 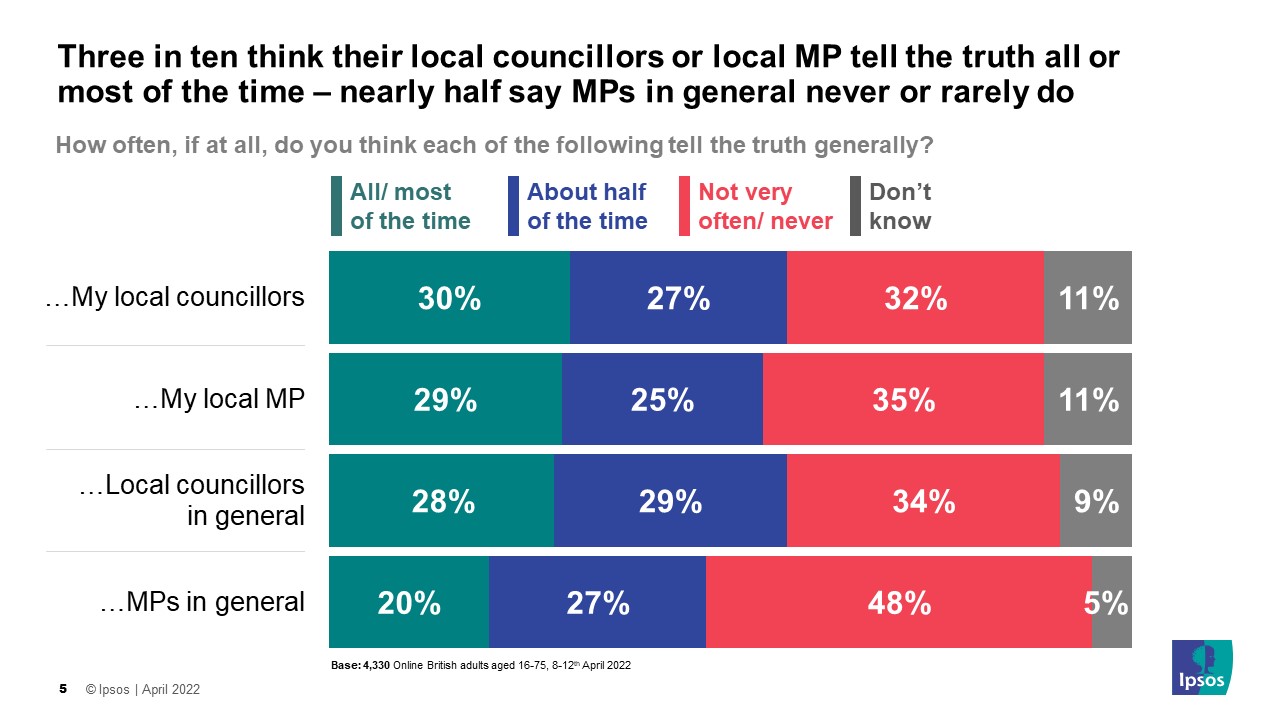 Nationally, much of the attention is being paid to the cost of living crisis, Ukraine and ‘party-gate’, but when it comes to the upcoming council elections more local factors will also have a role to play.  Although most people are pretty happy with where they live they still want to see improvements, particularly on roads, housing, high streets and the local cost of living – all of which are regular bugbears for local residents.  And these can all vary by where you live – for example, crime is a particular issue in London, while in the rest of the South East traffic congestion is a bigger priority.  While the public look more favourably towards local councils than central government when it comes to making their local area a better place to live, candidates will want to show how they are going to give local residents value for money by delivering on these bread and butter issues.

Ipsos in the UK interviewed a representative sample of 4,330 British adults aged 18-75. Interviews were conducted using its online omnibus between 8-12 April 2022. Data are weighted to match the profile of the population of this audience. All polls are subject to a wide range of potential sources of error.