The referendum on membership of the European Union has dominated the Government’s agenda since May’s election. Ipsos’s latest Political Monitor shows that three in five (61%) would choose to ‘stay in’ the European Union and 27% would choose to leave when asked how they would vote in a referendum. There is a clear difference between the three political parties and UKIP. Sixty-three percent of Conservatives, 76% of Labour supporters, and most Liberal Democrats would vote to stay in the EU. Nearly all UKIP supporters however would vote to leave. When asked the actual referendum question “should the United Kingdom remain a member of the European Union?” the Ipsos survey finds parallel findings to our trend question. More Britons choose to remain an EU member by a margin of three to one (66% say ‘yes’ while 22% say ‘no’). 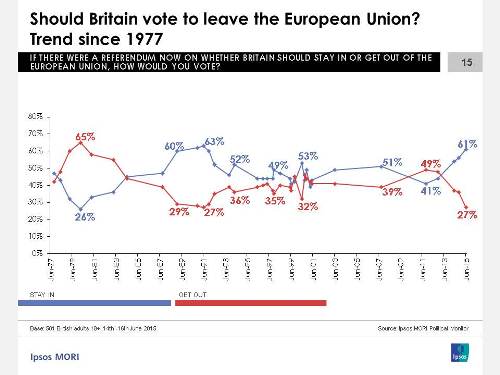 Despite these high numbers, most members of the public (57%) are not confident that David Cameron will achieve a good deal for Britain in his negotiations with other EU leaders. This compares to two in five (38%) who are confident that he will achieve a good deal for the country. This does however show a boost in confidence for the Prime Minister since last November when just 26% had confidence in him. When asked about preferences for Britain's future role in Europe, one in three (33%) would like to return to being part of an economic community, without political links, while 31% would like it to remain broadly as it is at present. Fourteen percent would like closer political and economic integration and 13% would like to leave the EU altogether.

As the debate on amendments to the EU Referendum Bill continues, most do not agree with the Prime Minister’s original proposal that cabinet ministers should be required to support the Government’s position on the referendum. Three in four (74%) say that cabinet ministers should be allowed to campaign for the position they believe most while one in five (19%) say they should be required to support the official government position. 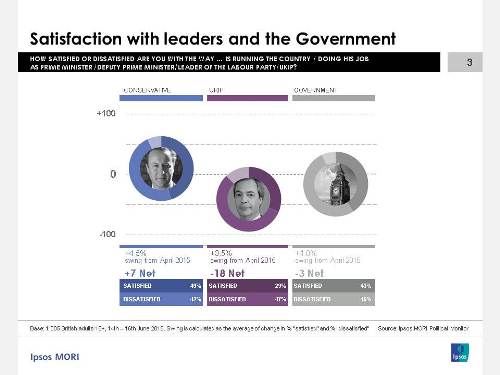 Mr Cameron enjoys high satisfaction levels from his own supporters. Nine in 10 (90%) intending to vote Conservative say they are satisfied with Mr Cameron and eight in 10 (81%) are satisfied with the Government. Economic optimism may be working in David Cameron’s favour as 42% believe the economy will improve in the next year while one in four (26%) say it will get worse although this has dropped since April. Satisfaction levels for Nigel Farage however are lower. Three in 10 (29%) say they are satisfied with his job as UKIP leader while 47% are dissatisfied. His decision to stay on as party leader after stating he would stand down though has had little effect on his supporters. Eighty-three percent of UKIP voters are satisfied with Mr Farage as leader and 12% dissatisfied.

"Support for staying in the EU has been growing since well before the election, and now stands at a 24 year high – even if some would also prefer a less political union.  However, Europe is rarely seen as a top priority for voters, and at the time of the 2011 Eurozone crisis the ‘outs’ were in the lead – so another crisis could see attitudes change again”.

Ipsos interviewed a representative sample of 1,005 adults aged 18+ across Great Britain. Interviews were conducted by telephone 14-16 June 2015.  Data are weighted to match the profile of the population.