October’s Ipsos Political Monitor shows that, in the aftermath of Douglas Carswell’s by-election win for the party, more of the British public now disagree that voting UKIP in a general election is a wasted vote than agree. Just under half (48%) disagree that a general election vote for UKIP is a wasted vote, compared with 41% who agree. This is a turnaround from earlier this year – last month, prior to the Clacton by-election, 50% thought a UKIP vote was a vote wasted and 41% disagreed; in May, some 57% thought voting UKIP was a wasted vote and just 33% disagreed.

UKIP’s vote share this month is also the highest we have seen in Ipsos’s polls.  UKIP are now on 16% of the vote, up one point from last month. Labour lead the polls having been behind by a single point last month, but only by virtue of the Conservatives’ vote share falling – Labour are unchanged from last month on 33%, with the Conservatives on 30%. The Liberal Democrats are up one point on eight percent, while the Green Party are down one point on five percent.

The combined 63% of support for Labour and the Conservatives is historically low for the two largest parties in British politics. The last time we saw their share this low was in April 2010, when the Liberal Democrats were flying high at 32% following the televised election debates.

Economic Optimism is down this month, with 37% now thinking the general economic condition of the country will improve over the next year; 31% now think the economic condition will stay the same, while 25% think it will get worse, giving an Ipsos Economic Optimism Index score (% improve minus % get worse) of +12. This is down from a score of +24 last month (when 45% thought it would improve, 21% that it would get worse) – and from an all-time high of +35 back in May (53% improve, 18% get worse).

Satisfaction ratings for the main party leaders and government have seen a decline for Ed Miliband and a rise for Nick Clegg, while Messrs Cameron and Farage have remained stable: 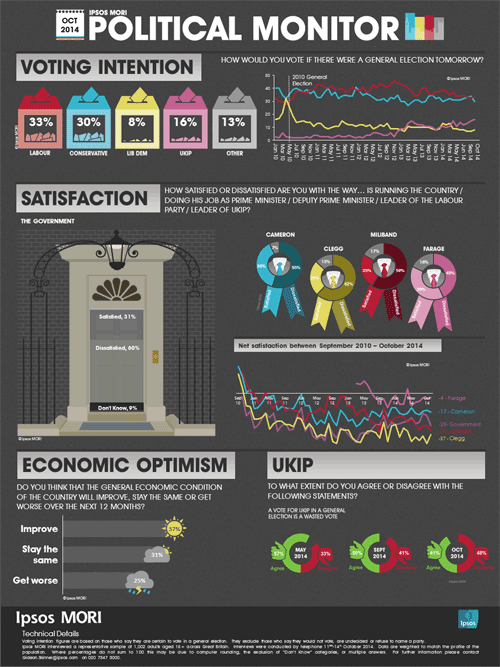 “These results represent another breakthrough in public opinion for UKIP, particularly the big drop in the proportion who think a vote for them is wasted.  The other main parties were counting on a continuing sense that there was no point voting for Nigel Farage’s party.  It may not be a surprise that the public are no longer so sure, given the by-election results - but it is still hugely important to UKIP’s prospects in the General Election.”

Ipsos interviewed a representative sample of 1,002 adults aged 18+ across Great Britain. Interviews were conducted by telephone 11 – 14 October 2014.  Data are weighted to match the profile of the population.