Aliens captivated the American imagination last summer, when millions of Facebook users RSVP’ed to a viral joke event titled “Storm Area 51, They Can’t All Stop Us.” The site, an air force base, is a storied subject for many sci-fi plots. The Air Force released an official warning that “any attempt to illegally access military installations or military training areas is dangerous.”

No one ended up storming the air force facility. Still, the town of Rachel, Nevada, which is near Area 51, held a watered-down festival of sorts in celebration of aliens, officially dubbed Alien-Stock.

Superficially at least, the excitement around Storm Area 51 bordered on the bizarre. But in fact, nearly two-thirds of Americans believe that there is life on other planets and a bare majority hold that intelligent life and civilizations exist outside of Earth. 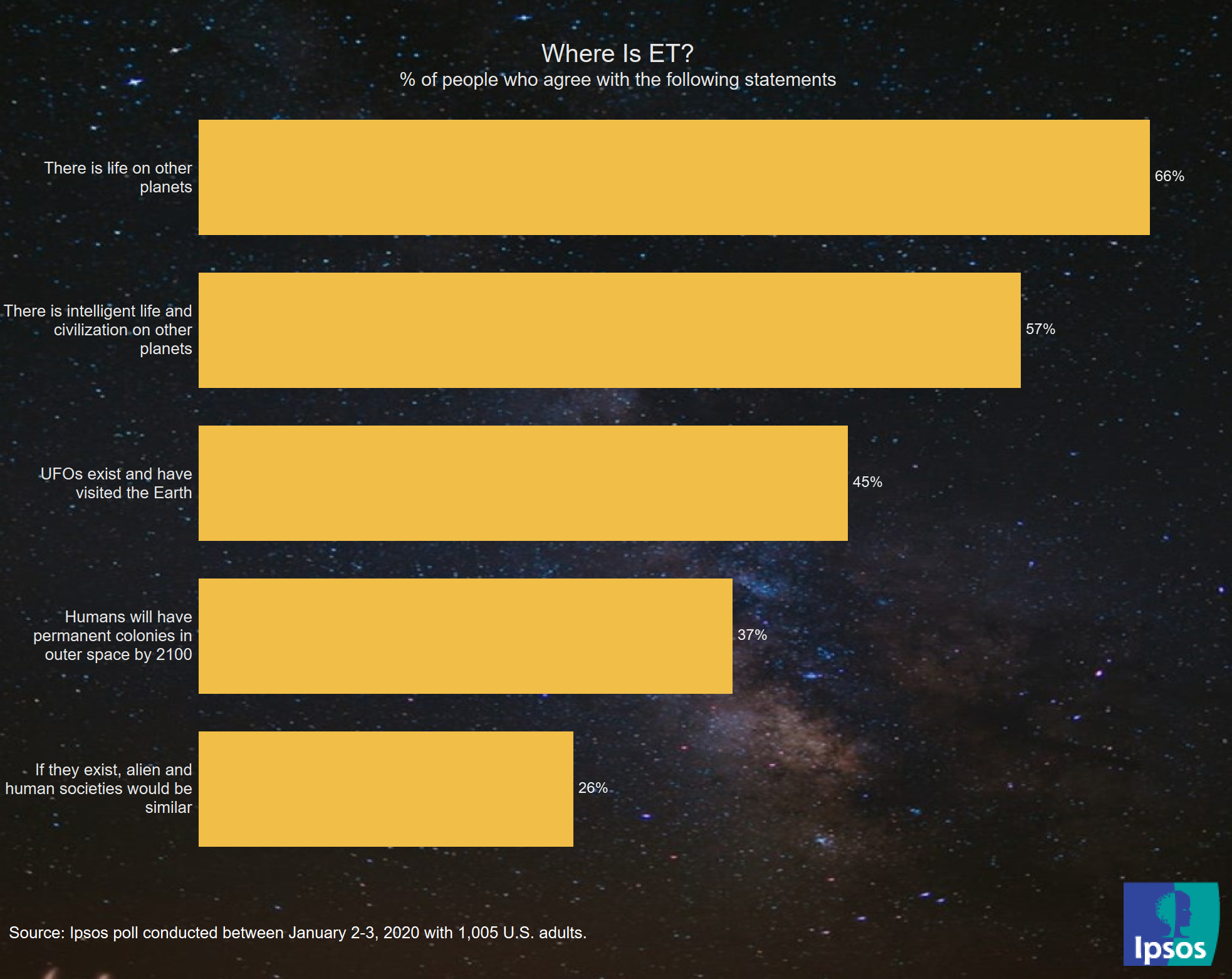 These results are backed up by a recent Ipsos poll conducted over the summer, which found that people, regardless of age group, are roughly split on whether aliens exist.

Americans take their beliefs literally: just under half of respondents said they believe that UFOs exist, tracking with the many “UFO sightings” reported in the United States. While the number of sightings is down slightly from 2014, there were nearly 5,800 reported UFO sightings last year, according to the National UFO Reporting Center’s monthly report index.

The National UFO Reporting Center dates its earliest UFO sightings to the late 1800s, though the age of the alien really took off in the second half of the 20th century.

The first popularized UFO spotting occurred at the height of summer during 1947 in Roswell, New Mexico. A rancher spotted wreckage over his fields, puzzled over it for weeks, and finally contacted local authorities who notified the Army. The first press release from the Army reported that the crashed vehicle was “a Flying Saucer,” and from there media attention and popular speculation took off.

The War Department in Washington later corrected the record to identify the object as a weather balloon. Nonetheless by the end of 1947, 300 additional “flying saucer” sightings were reported in the last six months of the year.

American attitudes and UFO sightings are grounded in a more frightening reality. The weather balloons reported by the War Department were part of Project Mogul, a top-secret operation the Army was conducting to monitor Soviet nuclear activity in the ionosphere.

The geopolitics of space hold promise and pull hold to this day, according to a recent C-SPAN/Ipsos study on space. Nearly seven in ten (69%) believe international cooperation allows for faster advancement.

For many, this all-for-one mentality stops at a certain point. Half believe the U.S. should re-start its moon mission to catch-up to China. The C-SPAN study also found a sizeable minority of Americans (39%) believe there is some strategic importance to becoming space colonists, and the most recent Ipsos study found 37% of U.S. adults believe humans will have permanent colonies in outer space by 2100.

Perhaps the reason so few believe there will be colonies in 2100 has to do with how Americans prioritize space missions right now. The C-SPAN/Ipsos study found that the only space mission to win a bare majority (52%) of support from the public was using satellites to monitor Earth for environmental changes. Manned and unmanned missions to explore space received much less support.

Still, some enterprising entrepreneurs aren’t just looking at the realpolitiks of space, but instead are trying to push the next leg of the space race into the private sphere. Earlier this month, Elon Musk, the eccentric start-up CEO, said he wanted to send one million people to Mars by 2050. Outside of running Tesla, the electric car start-up, he also is creating SpaceX, a commercial space company.

Musk attributes his skyward ambitions to his love of science fiction, specifically "The Hitchhiker’s Guide to the Galaxy,” the story of a human rescued from a dying Earth by an alien and then left stranded in the middle of the galaxy.

Vision or craziness inspired by aliens, real or not, the time and money Musk is putting behind the venture is ahead of the American public. Maybe the roles will be reversed, and we will phone home instead of E.T. Where things stand now, Americans need more convincing that our space capabilities can match an alien’s prowess in that field.