Washington, DC, March 24, 2021 — Two in three Americans think gun laws should be more strict than they are today, according to a new USA Today/Ipsos poll, conducted in the days immediately following a mass shooting in Boulder, CO. Though a majority are in favor of such reforms, this latest poll marks a decline in support from a similar USA Today/Ipsos survey in 2019. One of the primary causes for this shift is due to Republicans’ views on the subject changing; a vast majority of Democrats continue to favor stricter gun laws and congressional action on existing background check legislation.

1. While a majority of Americans continue to favor stricter gun laws, support has declined over the past two to three years.

2. Three in five Americans believe the U.S. Senate should pass background check legislation. Here, too, the partisan divide has grown over time. 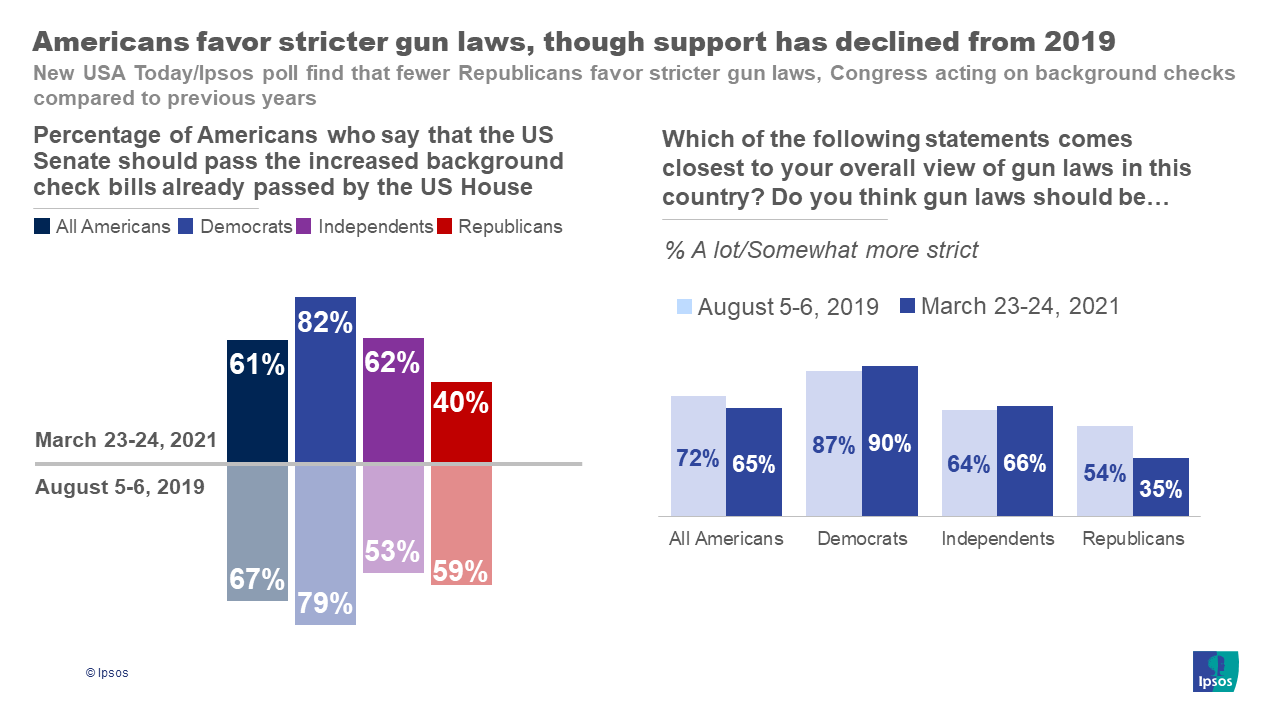 3. As was the case in 2019, a majority of Americans believe the mental health system, racism and white nationalism, and loose gun laws are responsible for mass shootings in this country. Fewer place blame on gun manufacturers and the NRA.

These are some of the findings of an Ipsos poll conducted between March 23-24, 2021 on behalf of USA Today. For this survey, a sample of roughly 1,005 adults age 18+ from the continental U.S., Alaska, and Hawaii was interviewed online in English. The sample includes 460 Democrats, 368 Republicans, and 111 Independents.

Statistical margins of error are not applicable to online non-probability polls. All sample surveys and polls may be subject to other sources of error, including, but not limited to coverage error and measurement error. Where figures do not sum to 100, this is due to the effects of rounding. The precision of Ipsos online polls is measured using a credibility interval. In this case, the poll has a credibility interval of plus or minus 3.5 percentage points for all respondents. Ipsos calculates a design effect (DEFF) for each study based on the variation of the weights, following the formula of Kish (1965). This study had a credibility interval adjusted for design effect of the following (n=1,005, DEFF=1.5, adjusted Confidence Interval=+/-5.0 percentage points).