How did people on Twitter feel about last night’s Democratic primary debate in Atlanta? It will surprise no one that the denizens of Twitter had many opinions about the proceedings. Ipsos’ live Twitter tracker followed along, looking at overall sentiment regarding what was being said about each of the candidates on Twitter and the volume of mentions they received.

While there was no clear standout from the debate, a few candidates appear to have drawn better reactions from Twitterverse than others. Kamala Harris and Amy Klobuchar had good nights relative to the fact that both candidates were polling at 3% and 1% respectively heading in to the night, trailing current frontrunners Biden, Sanders, Warren and Buttigieg.

Over the course of the debate, Harris dominated the mentions on Twitter. While the sentiment overall was a mix of both positive and negative, the California lawmaker certainly captured Twitter’s attention as she took a stand on issues like paid parental leave, the gender wage gap, and more. Memorable comments like her declaration that “Donald Trump got punked” by Kim Jong Un, the dictator of North Korea, also probably helped.

For a candidate in her position, growing her name recognition will be key, so the night was likely a win for her. As the evening drew to a close, overall sentiment about her began to skew more positive as well.

Amy Klobuchar meanwhile got less attention than Harris but received the most consistently positive Twitter feedback over the course of the debate. She and fellow even-keeled Midwesterner Pete Buttigieg rose to the top in terms of positive sentiment over the course of the evening. Granted, lower mentions tend to correlate with higher positive sentiment because the people tweeting are likely to be core supporters of the given candidate. Still, Klobuchar did well. 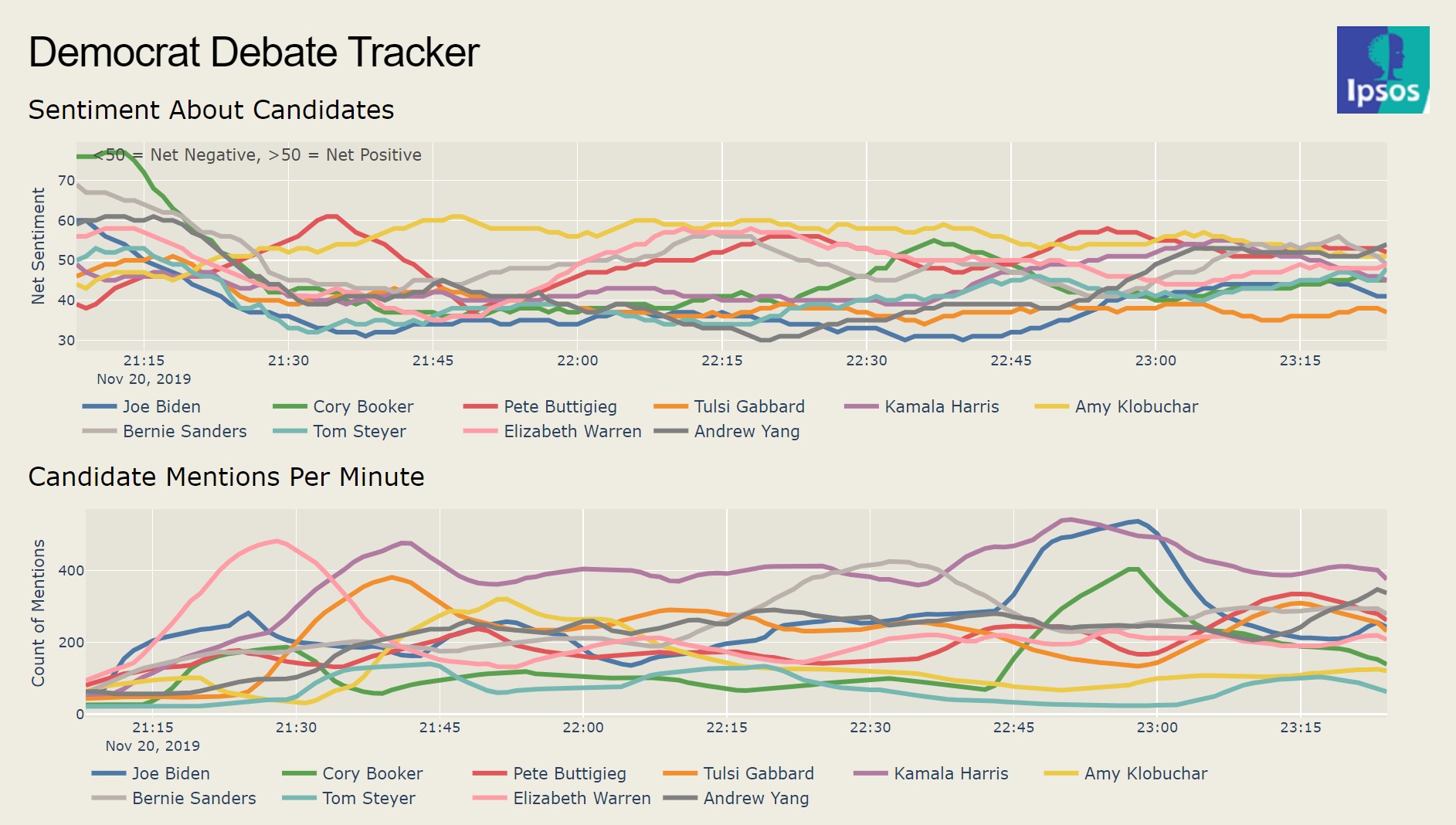 While the night was notable for its civility (with the exception of a few tense exchanges between Tulsi Gabbard and other candidates), Cory Booker and current frontrunner Joe Biden added a note of drama when they locked heads over issues like decriminalizing marijuana and who resonates most with black Americans. Twitter took note, and Booker finally began to take off in the mentions. 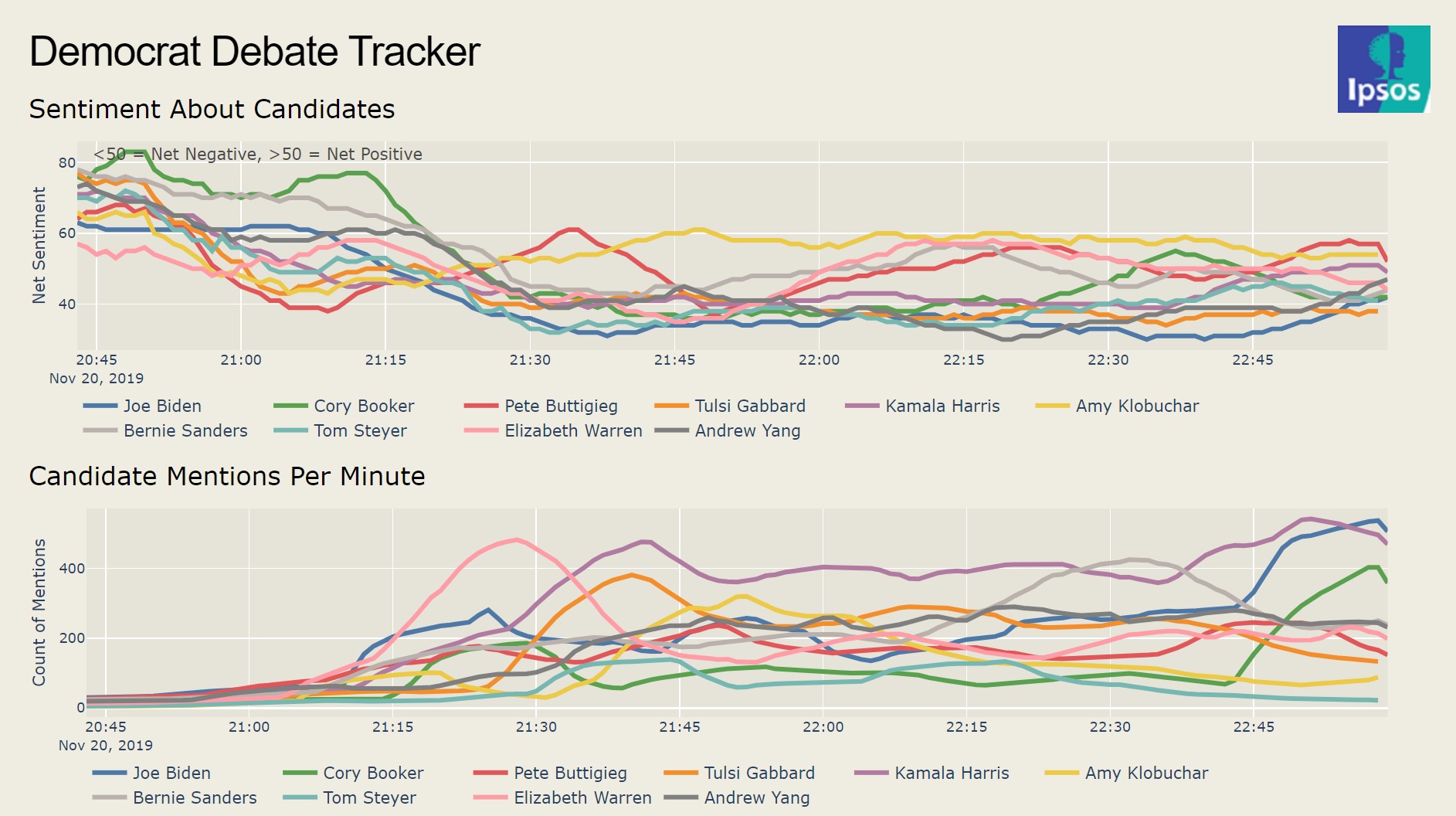 The female candidates had a good night overall, dominating the Twitter mentions and tending to track towards positive sentiment. Tulsi Gabbard, for whom sentiment was mostly negative, was the exception. The eight women (four candidates and four moderators) involved in the debate is a historic first. 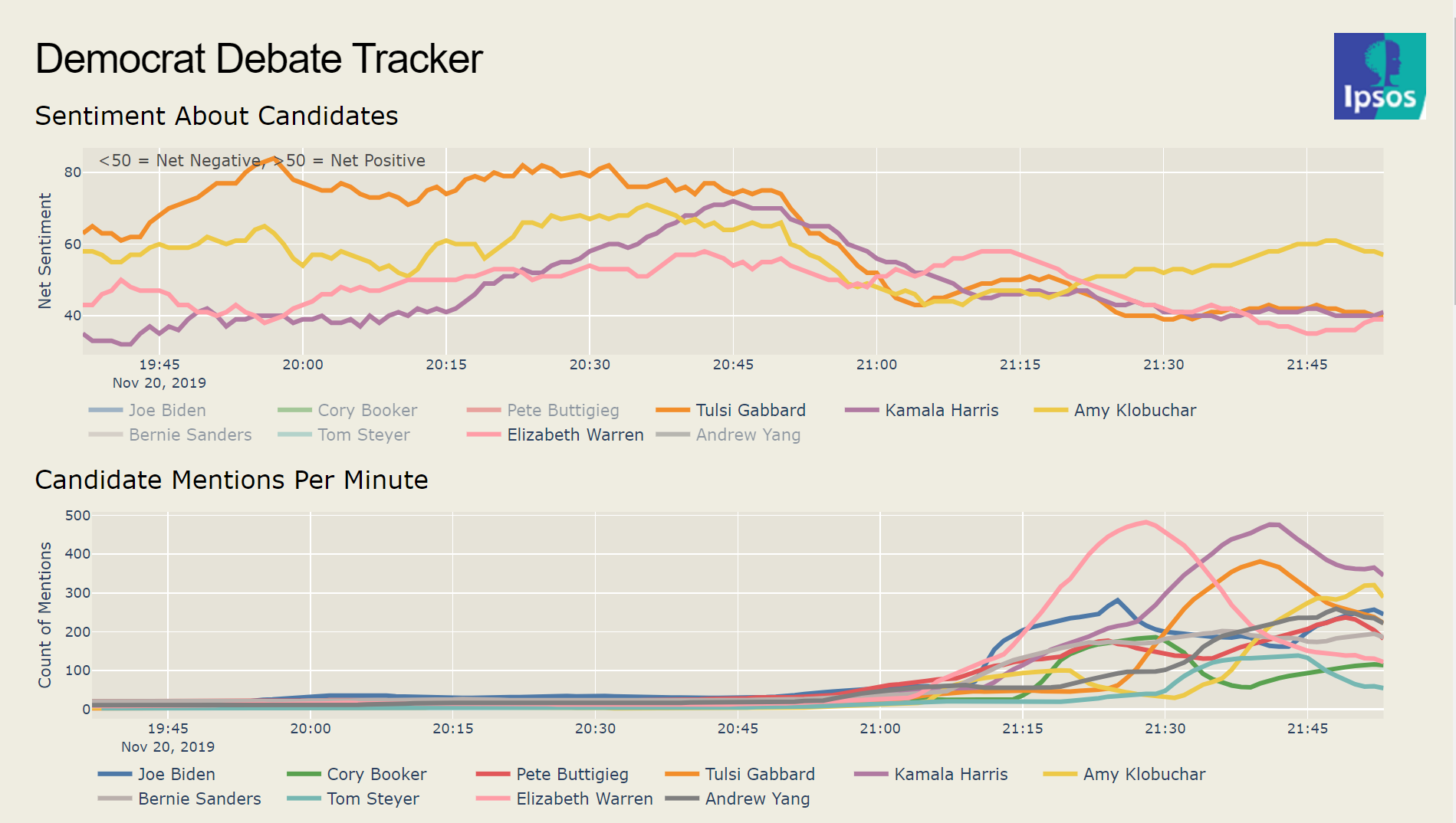 Top tier candidate Elizabeth Warren started the night out strong arguing for her Medicare for All plan, and then tapered off for the rest of the night. She seemingly spent much of the debate defending her controversial vision for a Medicare for All and increasing taxes for the wealthy. 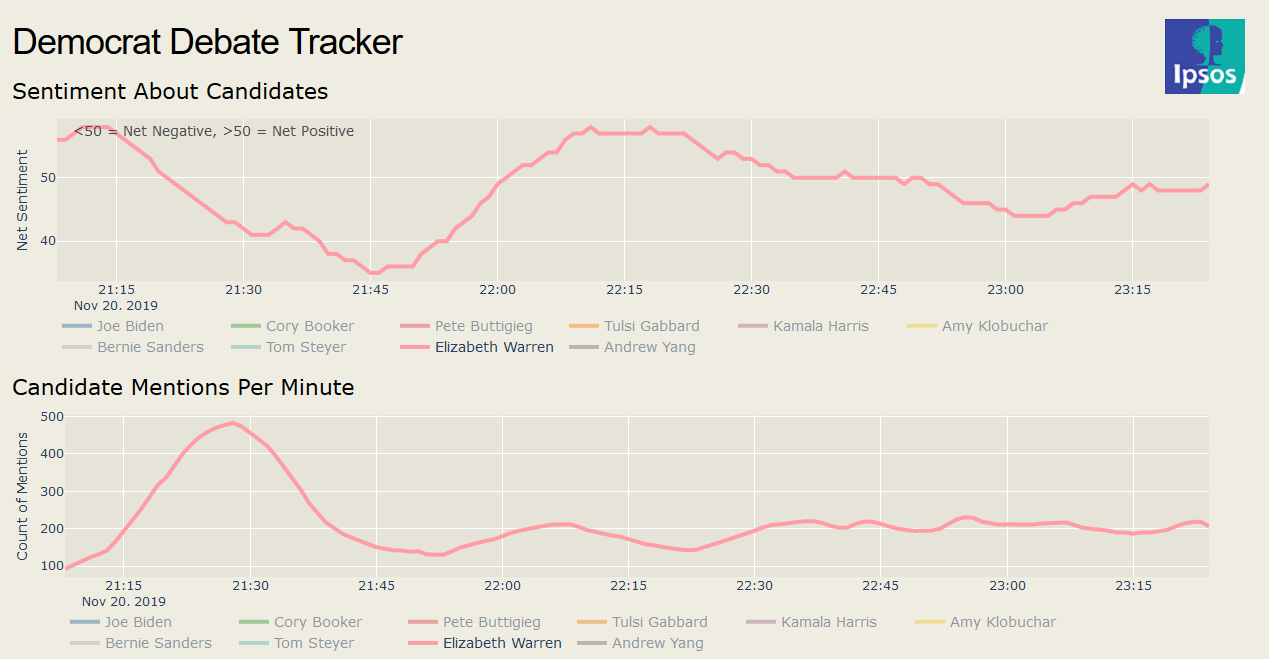 Also worth mentioning: the valiant efforts of the #YangGang on Twitter to elevate their chosen candidate. Though he performs well on Twitter, Andrew Yang has a lot of ground to make up in the polls in order to become a viable candidate. As an aside, did anyone else appreciate Yang’s “math” lapel pin? 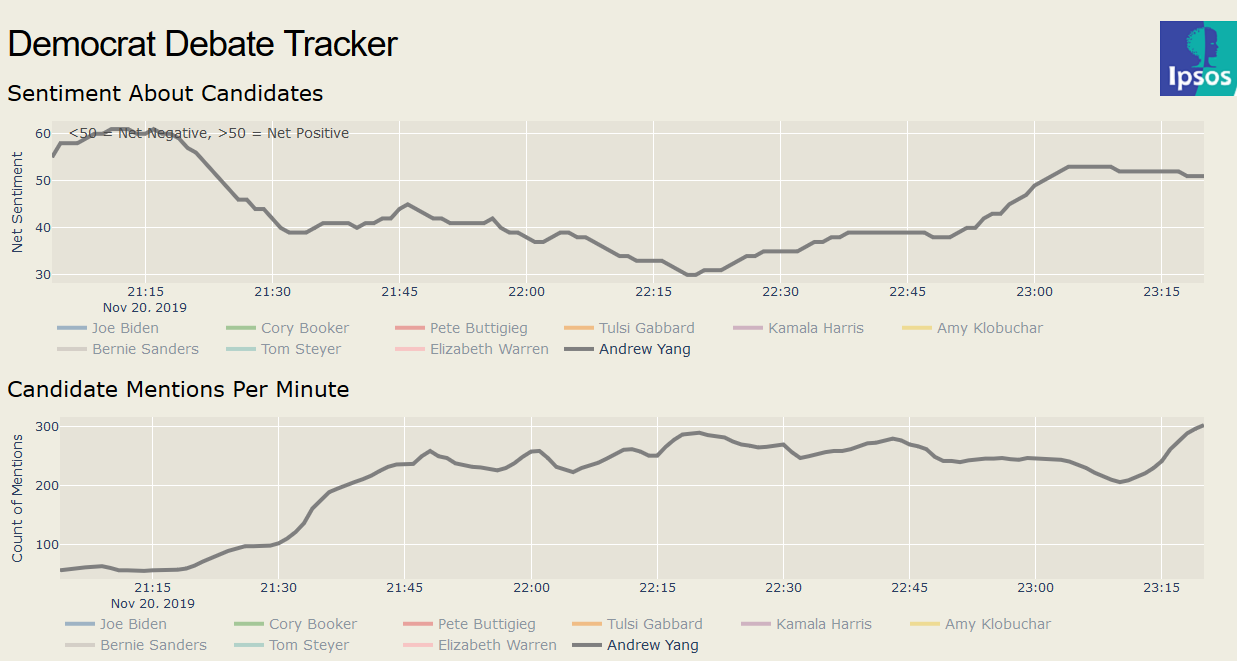 While there was no clear winner, the candidates were able to cut through the noise about impeachment on Twitter and shift the conversation to substantive topics like healthcare, racism, immigration, etc. In a sense, the candidates mainly started out the night the way they headed in to it, with no one single candidate standing out too much in the crowd.

Going forward, we will continue to refine the Twitter tracker to keep tabs on the social media dialogue about candidates in real time. Stay tuned for the next debate.