New York -- A global average of half (47%) of employees in 24 countries agree their current workplace is a `psychologically safe and healthy environment to work in' finds a new survey conducted by global research company Ipsos for Reuters News. A further three in ten (27%) disagreed while one quarter (26%) place themselves in the middle of their assessment.

Three in ten (27%) global employees gave their workplaces the lowest marks for being psychologically safe and healthy with those workers from Argentina (44%), Mexico (43%), Hungary (42%) and Spain (38%) reflecting the strongest disagreement followed by Russia (36%), Poland (35%) and France (32%).

Ipsos surveyed a total of 14,618 employees in 24 countries to rate on a scale of 1 to 10, (where 1 means strongly disagree and 10 means strongly agree) how strongly they agree or disagree with the following statement: `Overall, my current workplace is a psychologically safe and healthy environment to work in.' The top group of employees were those who scored at least 7 out of 10, the second group was in the middle range (rate of 5 or 6 out of 10) and the lowest or most likely to `disagree' group rated their workplace as a 1, 2, 3 or 4 out of 10. 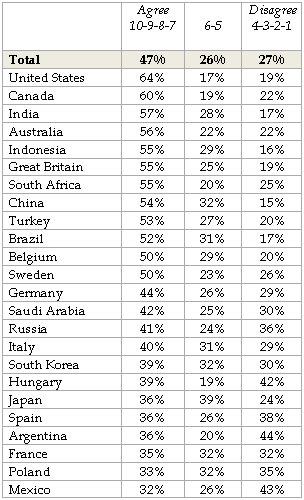 An international sample of 21,245 adults (14,618 employees) aged 18-64 in the US and Canada, and age 16-64 in all other countries, were interviewed between December 6 and December 19, 2011. Approximately 1000+ individuals participated on a country by country basis with the exception of Indonesia, Poland, Sweden, Russia and Turkey, where each have a sample 500+.

For all Reuters/Ipsos Polls go to: http://www.ipsos-na.com/news-polls/reuters-polls/

For information about Ipsos and access to all Media and Polling Releases go to: http://www.ipsos-na.com

Thomson Reuters is the world's leading source of intelligent information for businesses and professionals. We combine industry expertise with innovative technology to deliver critical information to leading decision makers in the financial, legal, tax and accounting, healthcare and science and media markets, powered by the world's most trusted news organization. With headquarters in New York and major operations in London and Eagan, Minnesota, Thomson Reuters employs more than 50,000 people and operates in over 100 countries. Thomson Reuters shares are listed on the Toronto Stock Exchange (TSX: TRI) and New York Stock Exchange (NYSE: TRI). For more information, go to www.thomsonreuters.com