New York, NY - A new study provided exclusively to Portada by MediaVest and Ipsos MediaCT reveals that Hispanics have a much more optimistic perspective on on their lives, and the state of America more generally. This is even more the case for Spanish-dominant Hispanics.

MediaVest commissioned Ipsos MediaCT to conduct Optimism in America, a study designed to take the pulse of Americans today with regard to optimism, goals, and the American Dream. The study was conducted via an online survey of 1,033 adult Americans during October 2011. The results were weighted to reflect the U.S. population according to U.S. Census data.

To ensure a broad and accurate representation of Hispanic Americans, respondents were given the option of taking the survey in English or Spanish. To further ensure the adequate representation of less-acculturated and Spanish-language-dominant Hispanics, respondents were recruited through multiple sources, including the well-respected Cada Cabeza research panel (http://www.knowledgenetworks.com/resources/cada-cabeza.html). In total, 144 of the 1,033 (14%) respondents described themselves as Hispanic; of these, 88 took the survey in English, and 56 took the survey in Spanish.

Respondents were asked their agreement to the statement, "Because of the economy, I have had to put a lot of my dreams 'on hold.'" Fully 60% of Hispanics agreed with that statement. That's a larger share than non-Hispanic white/Caucasian (50%), non-Hispanic Asian (50%), and Non-Hispanic Black/African-American (39%).

The table below shows the relative importance of each type of goal across four major ethnic and racial groups. Family is important to all groups while "personal goals" have a stronger pull among Hispanics. Additionally, all groups rate "career goals" the lowest of the five groups measured. 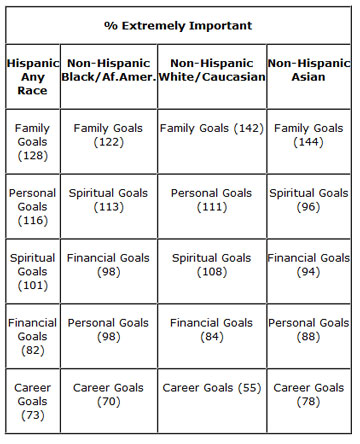 Visit www.ipsos.com to learn more about Ipsos offerings and capabilities.