This season, thanks to Synthesio's solutions, we tracked and analyzed online conversations related to Fashion Weeks in New York, London, Milan, Paris, and Dubai. We looked at English-only mentions around the world from September 9th to October 15th to see which topics, celebrities and trends stood out. If you don't follow Synthesio on LinkedIn or Twitter yet, here’s a summary of the events we'll remember most.

Every season, Fashion Weeks gather the hottest celebrities from around the world. This year was no different: K-pop idols generated massive buzz in online conversations. These stars have made hundreds of headlines and served looks not only in runway seats, but also on the catwalks themselves. At Peter Do’s show, South Korean rapper Jeno made his NYFW runway debut and became the first K-pop idol to open a NYFW show.
In Paris, K-pop idols also showed their global ambassador status with the presence of all of the BLACKPINK girlband members (who are all luxury brand representatives): Jisoo, Jennie, Rosé, and Lisa. A total of 10.6k conversations during Fashion Week mentioned the band.

Online, K-pop idols dominated social conversations about Fashion Weeks, entering (and claiming most of) the top 10 hashtags by volume for both New York and Milan. #nyfwdahyun (referring to Kim Da-hyun, singer in the K Pop band Twice) alone gathered more than 100K mentions during NYFW. 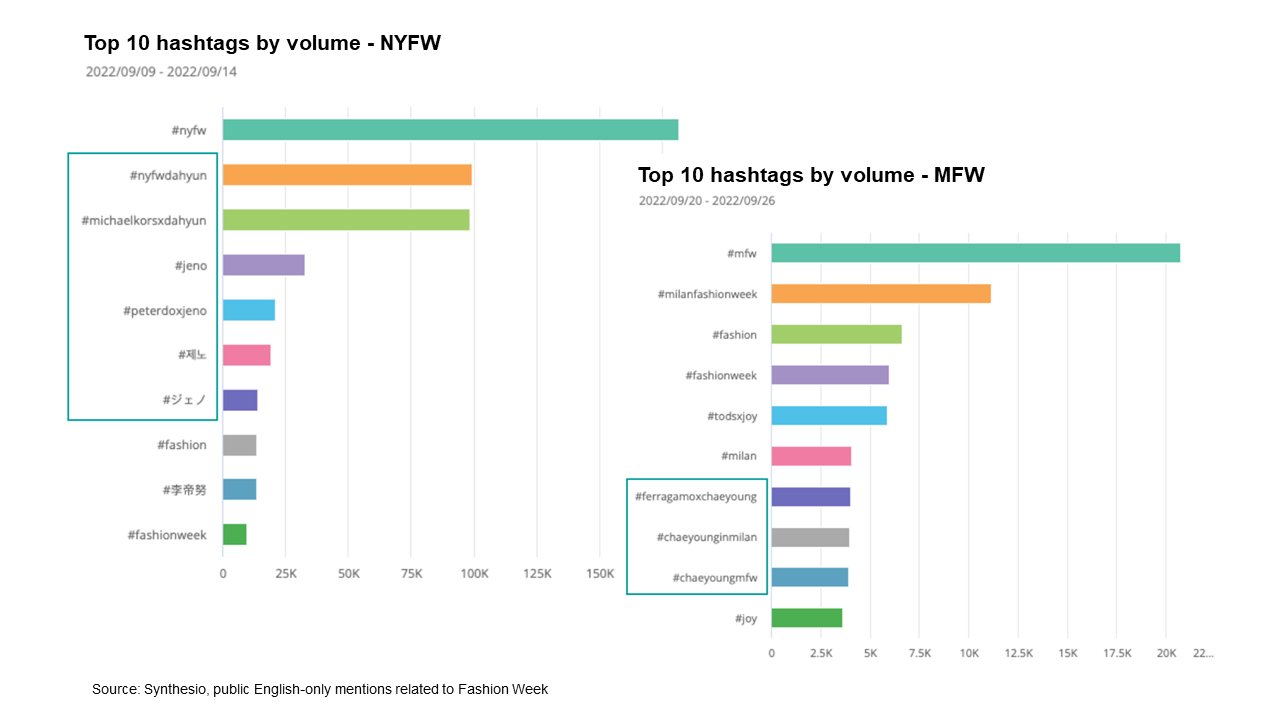 Sustainable fashion made a splash in London

This season, London Fashion Week was marked by the death of Queen Elizabeth II and national mourning. Following the news, the most-awaited shows (including Burberry’s) were cancelled. Using our trend discovery engine Topic Modeling, we observed an emerging signal in social conversations: “sustainable fashion” (see the purple conversation cluster below).
Digging into the conversations, we discovered that the designer Lucy Tammam - one of the early sustainable fashion pioneers - refused to cancel her London Fashion Week show and sent one model out in a top bearing the slogan “God Save The Planet.”
A brand spokesman said the National Anthem parody, “was a response to the enormous amount of resources and energy being given to the Monarchy when we need to focus our attention on climate change.” 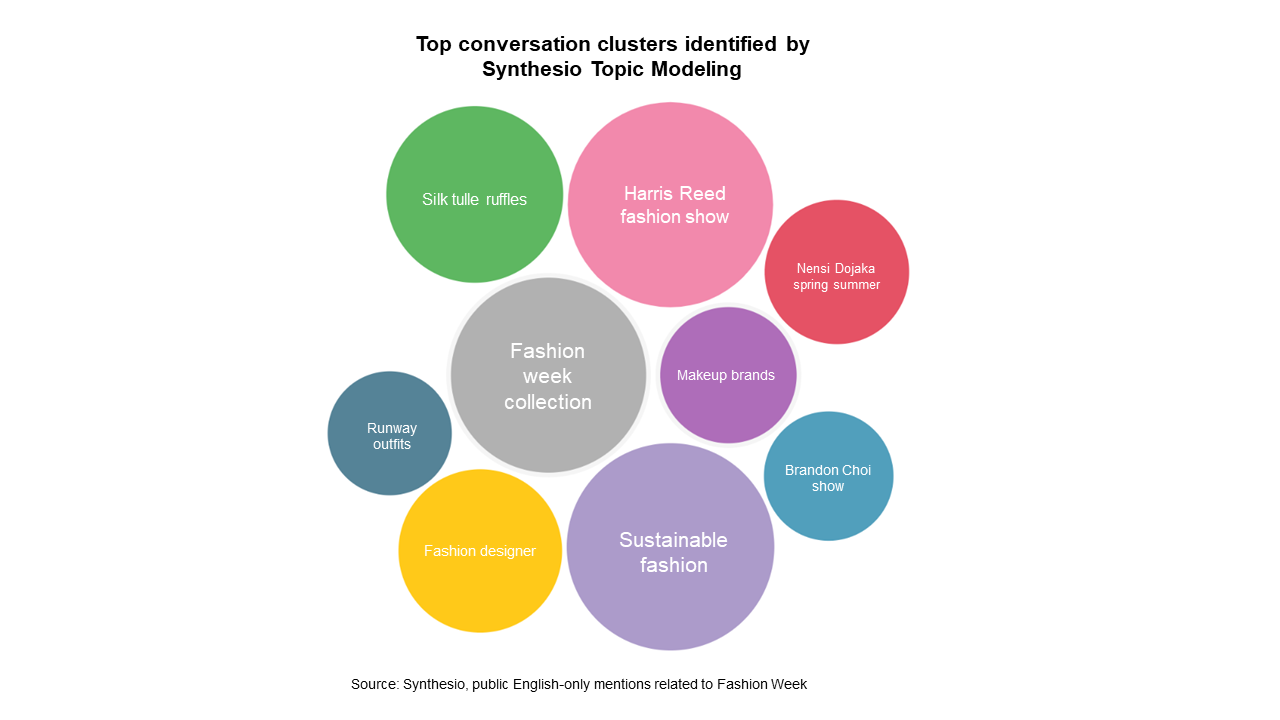 Orange is not the new black

Using our proprietary next-gen image analytics technology, we identified the trends hidden in the Fashion Weeks’ catwalk photos and videos. Our ‘scene recognition’ model offers the ability to understand the visual context surrounding shows and identify objects, colors, people, animals, and more. We decided to focus on the most prevalent colors (to finally decide whether or not the pink sweater I’m dying to buy is worth it) and found that black and white were most popular on the catwalks in New York, London, Milan, Paris, and Dubai.

Looking deeper into the conversations, we could see which outfits generated the most social interactions. In white, we found the most discussed outfit from this season was Coperni’s spray-on dress (no surprise!). This picture alone gathered more than 30K interactions. It’s also worth noting that Bella Hadid was the most discussed celebrity during Paris Fashion Week, as identified by Synthesio Semantic AI. 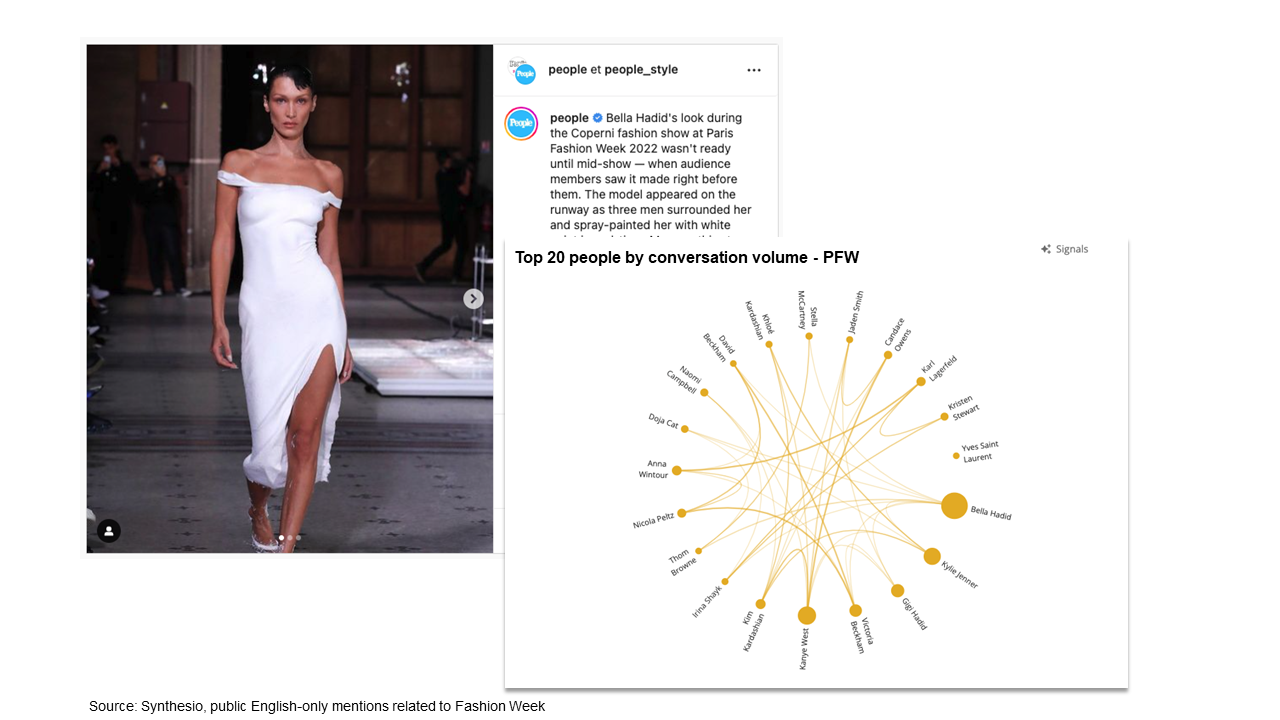 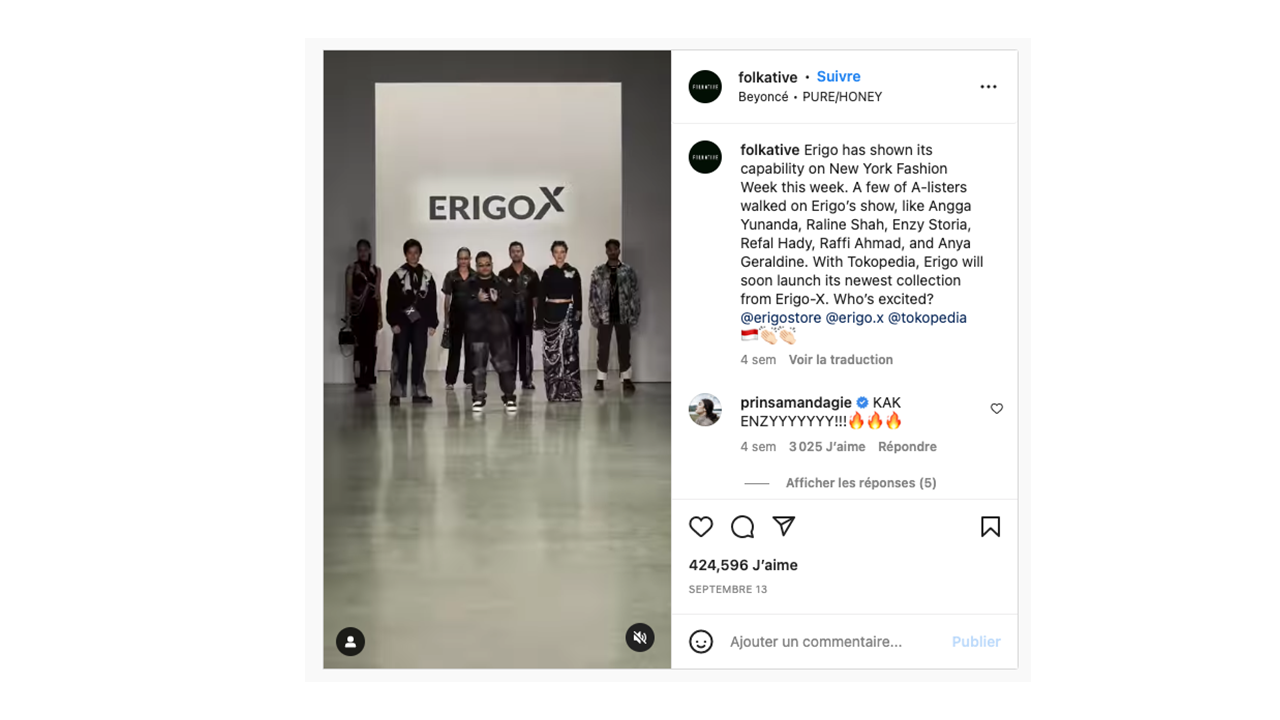 Fashion Week is one of the major marketing pillars of luxury brands. First, it is an extremely high-profile event with an inherently high media stake. According to the FHCM, the media impact of Paris Fashion Week 2021 was 250 million euros. This season, we saw brands build unique momentum during the global Fashion Weeks, showcasing how brand ambassadors (both those attending and appearing in shows) strongly influence brand performance.

Fashion Week is also a brand image challenge. Although we expected conversations to focus on clothing collections, our AI-enabled consumer intelligence platform analysis proved that people tend to get more excited about the celebrities than the brand names or outfits. This year, three brands managed to earn the spotlight by leveraging smart brand ambassadorship:

Want to get a full picture of the conversations that matter most to your brand? Request a free demo of our AI-enabled consumer intelligence platform here.