Washington, DC, October 27, 2022 -- The final FiveThirtyEight/Ipsos Election Tracking poll before the midterm election finds that Americans are essentially equally divided between Democrats, Republicans, and neither side. With less than a third saying Democrats have earned another 2 years controlling the government, and just over a quarter saying Republicans have made a good case for why they should have control, Americans as a whole are clearly disillusioned with the political offering. This comes as only about 1 in 5 Americans are following the midterm elections very closely.

2. Most Americans are not following the midterm elections closely.

3. Inflation remains the main worry for most Americans. However, for likely Democratic and Republican voters, other issues are paramount.

4. Just under a third of Americans think the news media has done a good job covering the 2022 midterm elections. 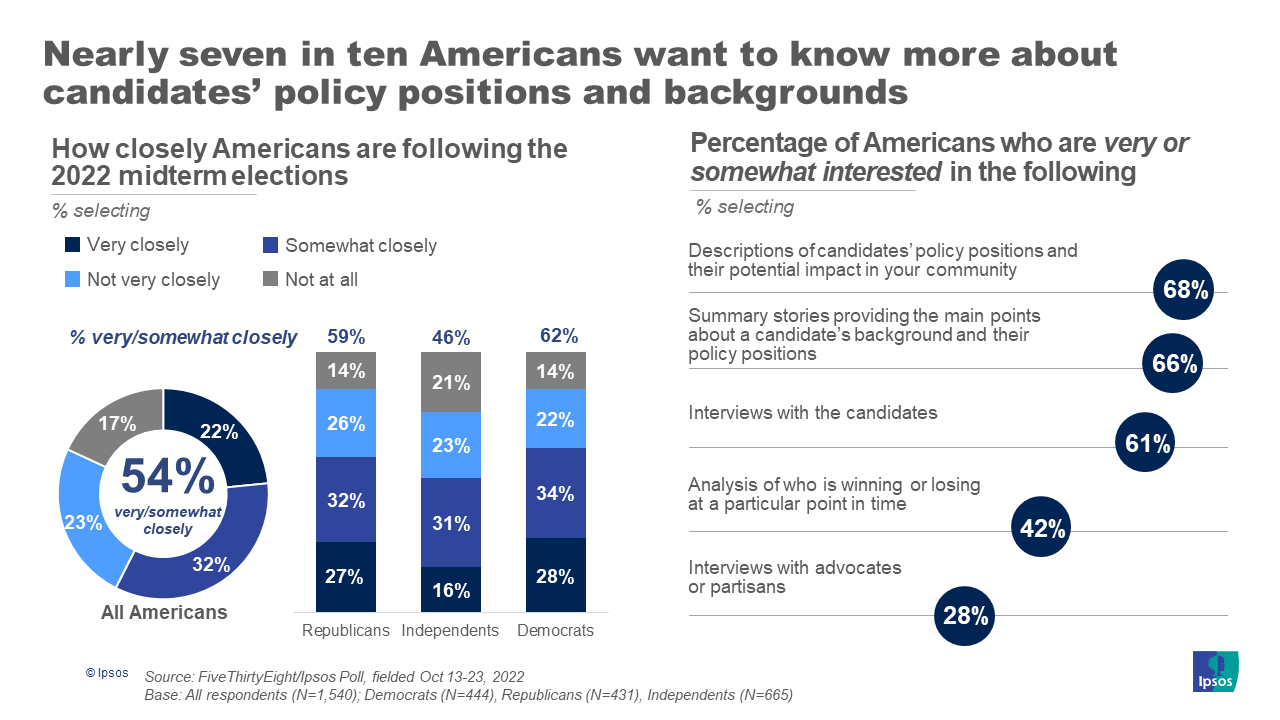 The final wave of the 538/Ipsos 2022 midterm program will come out after the election.

Washington, DC, September 29, 2022 -- The latest FiveThirtyEight/Ipsos Election Tracking poll explores Americans’ perceptions of climate change and immigration. The poll finds that Americans place both topics in a third tier of top concerns facing the country, trailing inflation, political polarization, and crime. Americans are divided on whether the government should prioritize climate change or immigration in the immediate future. This perception, however, varies widely depending on which side of the aisle someone is on — as do many of the findings. 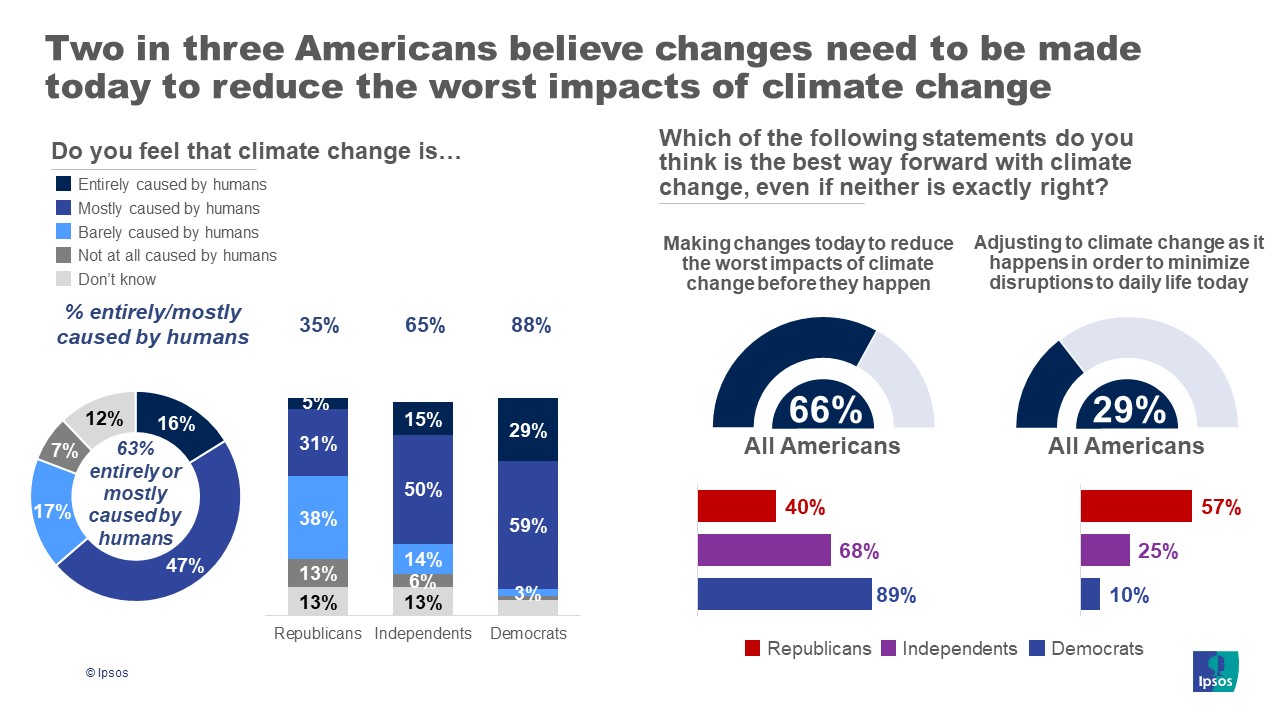 1. Inflation remains the top concern facing the country, with climate change and immigration in a third tier. Americans (particularly partisans) are divided on whether the government should focus on climate change or immigration.

2. Most Americans believe humans are entirely or mostly causing climate change, with large differences based on party affiliation.

3. Many Americans report already experiencing the impacts of climate change. However, a majority (regardless of party) fail to recognize the disproportionate impact climate change has on Americans based on their race or income.

4. Americans prefer a mitigation approach to climate change over one that focuses on adaptation, though this varies among partisans.

5. For Americans who rate immigration as a top issue facing the country, the vast majority believe undocumented immigration is a larger issue than legal immigration. However, a plurality of Americans say they do not know that most immigrants to the U.S. are in the country legally.

6. Support for stricter regulations on undocumented immigration is higher than it is for restrictions on legal immigration. Again, partisanship plays a major role in immigration policy preferences. 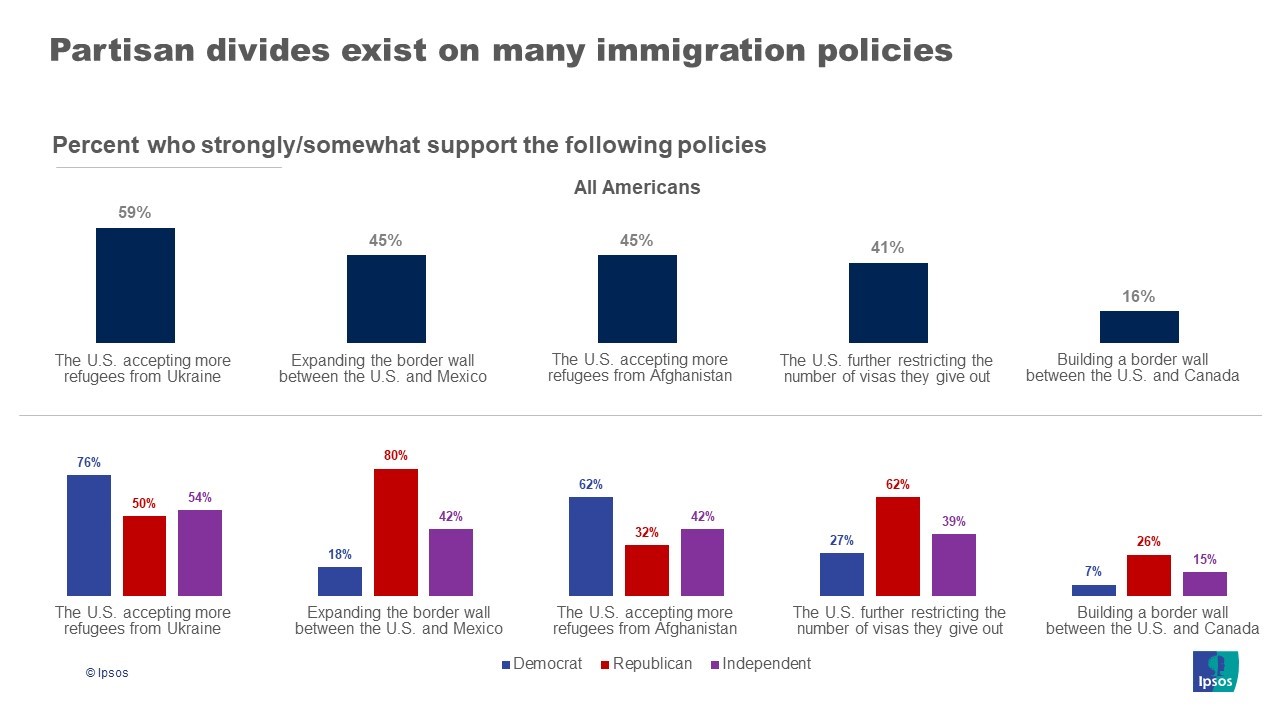 Washington, DC, August 10, 2022 -- The latest FiveThirtyEight/Ipsos Election Tracking poll finds crime or gun violence remains among Americans’ top concerns, albeit distantly behind inflation for most, and that a majority believe gun violence is a larger issue than crime. At the same time, just over six in 10 Americans believe it is more important to control gun violence than protect gun rights, and that the U.S. should have stricter restrictions on gun ownership. In fact, a number of possible restrictions garner bipartisan support.

Two and a half months after the mass shooting at Robb Elementary in Uvalde, TX, the poll also explores perceptions of what could make schools safer and the share of Americans that have experienced lock down drills to prepare for an active shooter during their K-12 education. 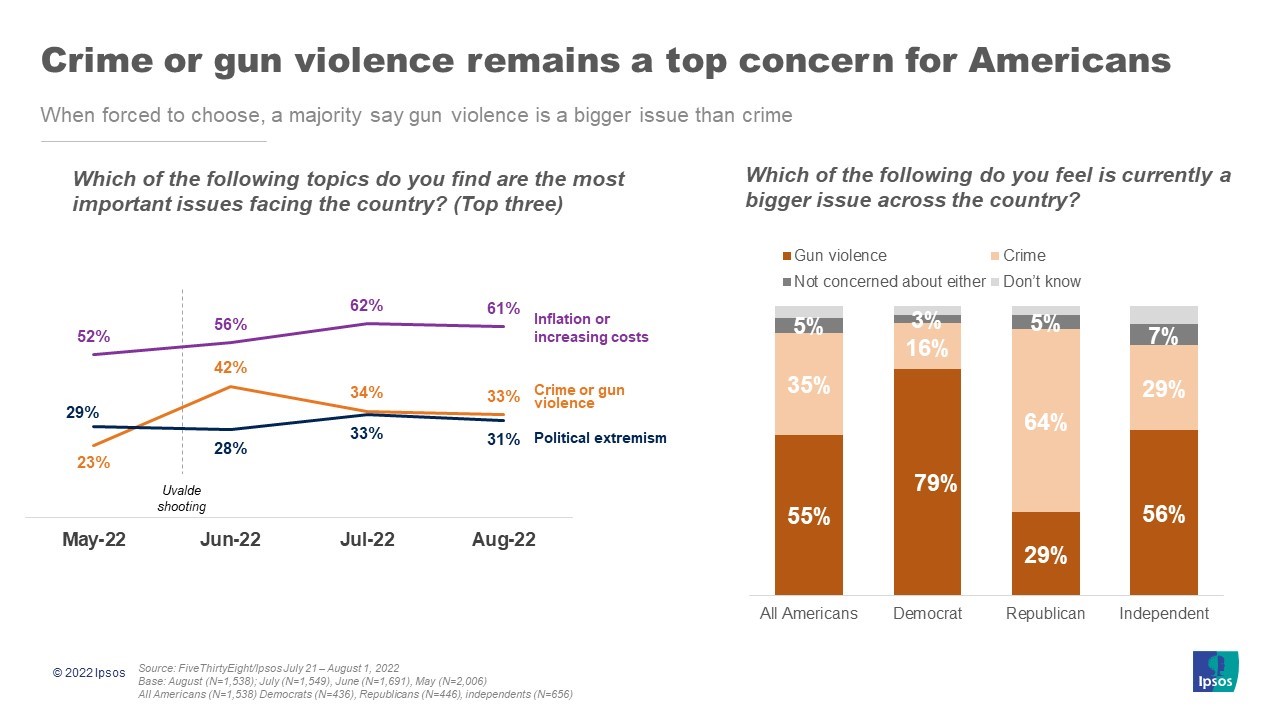 1. Crime or gun violence continues to rank among Americans’ top concerns. When forced to choose, more are concerned about gun violence than crime, though this differs based on party affiliation.

2. Across a series of true or false statements, Americans demonstrate relatively low knowledge of crime and gun violence statistics.

3. In general, Republicans do not favor stricter gun laws. However, many potential initiatives garner majority support across both sides of the aisle (and among independents). 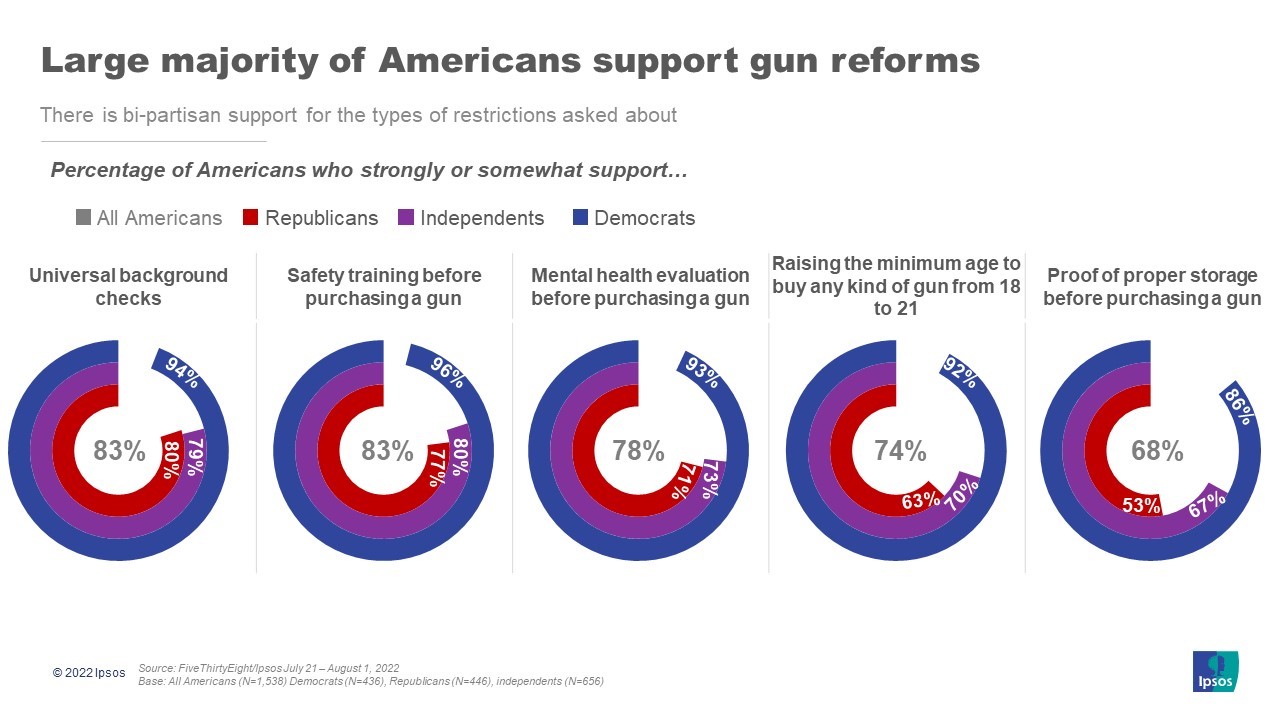 4. A narrow majority of Americans believe an increased police presence at schools would make them safer. However, few believe arming teachers would make schools safer. 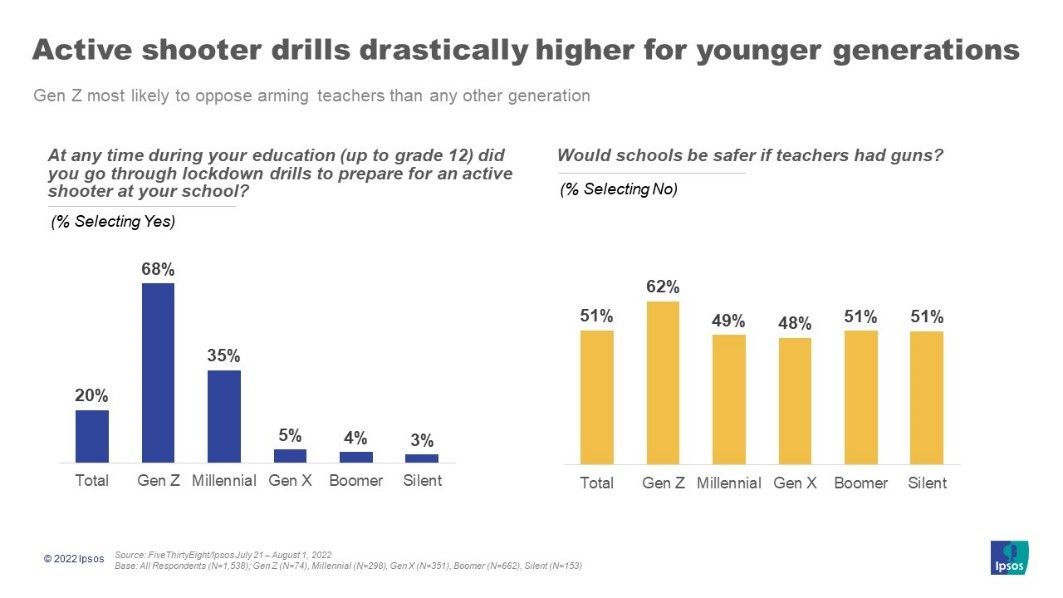 Washington, DC, July 12, 2022 -- In the wake of the Dobbs decision overturning Roe v. Wade and a federal right to abortion, the latest FiveThirtyEight/Ipsos poll finds that the majority of Americans continue to support legal access to abortion. However, the survey data shows that American attitudes towards abortion are complicated and, for most, not a clear “legal” or “illegal” decision. The study also shows supermajority support for contraception with the American public.

While one in eight say they are personally worried about abortion, and only one in five say that it is one of the most important issues facing the country, Democrats still appear to have made some slight gains in standings towards the midterms. Currently Democrats and Republicans are tied with the American public, an improvement for Democrats from the last few months where they have consistently trailed Republicans. It remains to be seen if these gains hold through the election.

1. The majority of Americans feel abortion should be legal, and a supermajority support legal access to birth control. 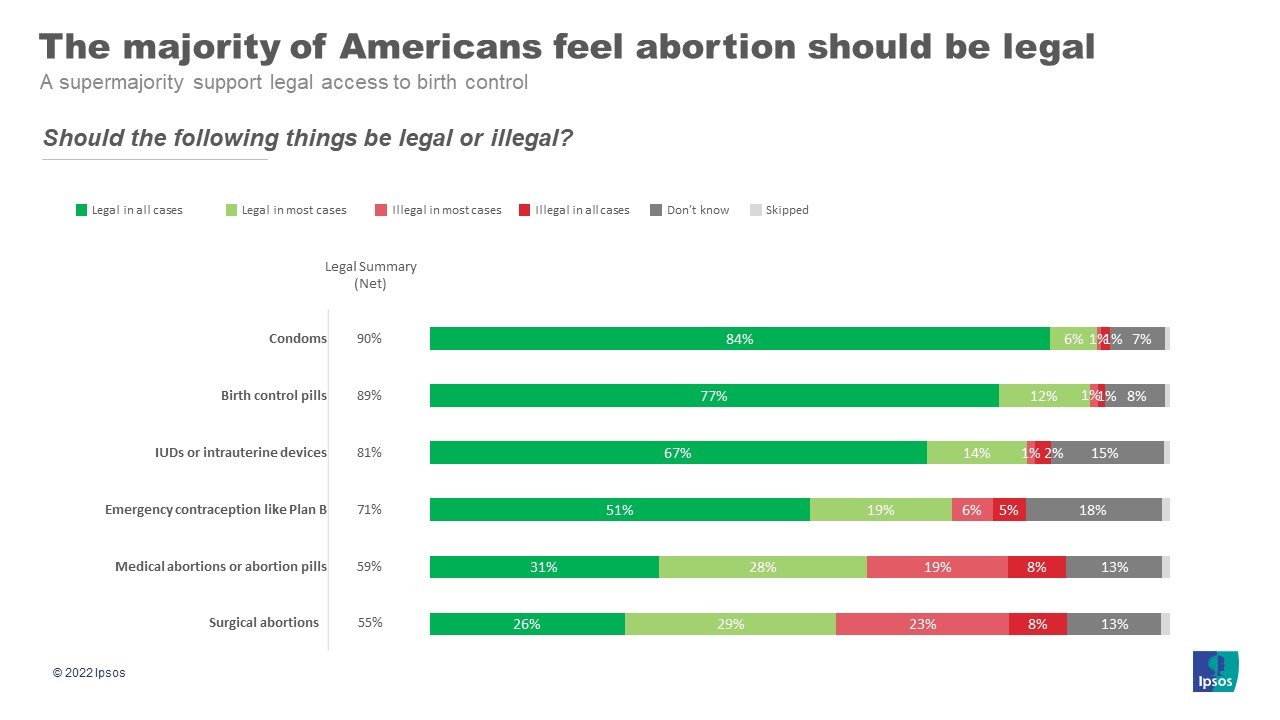 2. Americans are broadly opposed to measures making it illegal to obtain or assist with obtaining an abortion. But they are ambivalent on policies that might make it easier to access abortion services. 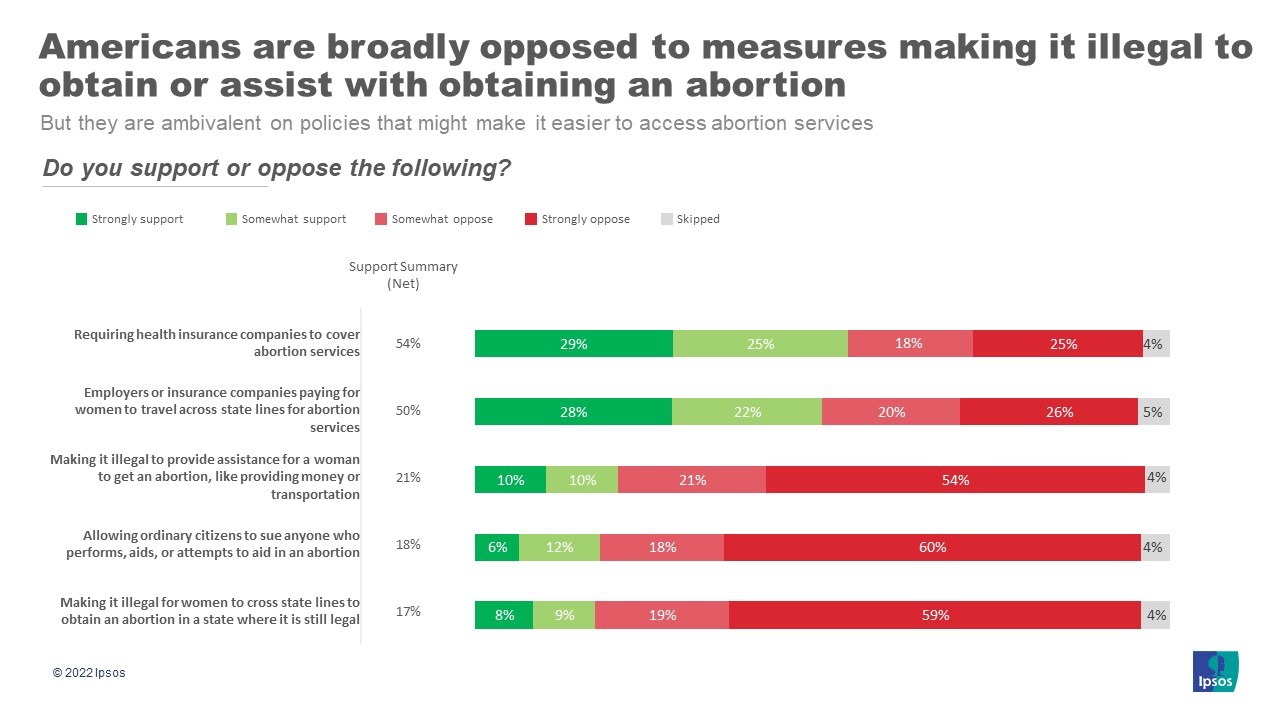 3. Many Americans are unclear on facts about abortion.

4. The top worries for most Americans continue to be inflation (60%), crime or gun violence (27%), and political extremism or polarization (30%). Only about one in eight Americans (13%) say abortion is a top personal worry.

5. Democrats and Republicans are tied on the generic congressional ballot, an improvement for Democrats from a month ago.

6. Perceptions of political figures – including the Supreme Court – are decidedly unfavorable.

Washington, DC, June 14, 2022 -- The second release this month for the FiveThirtyEight/Ipsos Election Tracking survey dives into what Americans know about partisanship, what they think drives political polarization, and their ability to predict what people think on the other side of the aisle.

Additionally, following a series of high-profile mass shootings, the second wave of the FiveThirtyEight/Ipsos Election Tracking survey finds gun violence and crime is now the second most important issue to Americans personally. While inflation still ranks as the main issue, gun violence and crime increased significantly as a problem for the public over the past month. Growing concern among Democrats largely drives this month-over-month change, despite decisive majorities of Democrats, Republicans, and independents all frequently seeing news about gun violence and crime. Conversely, few see abortion as a main issue.

1. Gun violence and crime now rank as the second most important issue for Americans.

2. Partisans were reasonably good at predicting what people in the opposing party believed.

3. Gun violence and crime now rank as the second most important issue for Americans.

4. Crime and gun violence has grown more as an issue for Democrats than Republicans or independents.

5. Despite the breaking news surrounding abortion in the past month, Americans still do not view it as a major issue.

1. Gun violence and crime now rank as the second most important issue for Americans.

2. Crime and gun violence has grown more as an issue for Democrats than Republicans or independents.

3. Despite the breaking news surrounding abortion in the past month, only 10% of Americans feel it is a main issue, a 5-point difference from May.

Washington, DC, May 17, 2022 -- The first of seven polls that will comprise the FiveThirtyEight/Ipsos 2022 Election Tracking Survey finds that inflation is the top concern for American adults. Many report facing negative financial impacts due to rising prices, and in turn, say they have had to make major changes to how they live their life. The poll also explores perceived causes of rising prices and whether the public and private sector should prioritize keeping prices low or employment high.

1. Inflation is the top concern for Americans, regardless of their political affiliation.

2. Inflation is a salient issue that many Americans report is impacting their financial situation and life choices. That said, misconceptions exist.

3. The largest share of Americans — across the political spectrum — blame supply chain breakdowns for rising prices. However, differences exist by party. 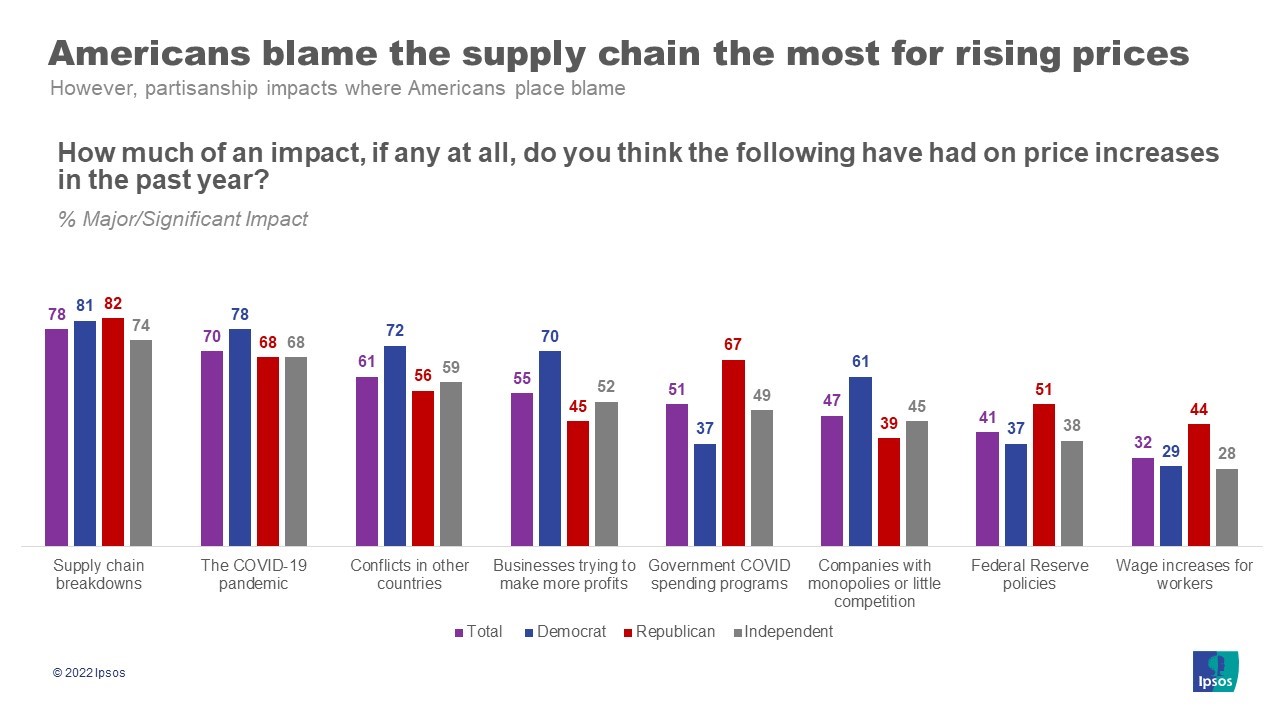 4. Roughly four in ten American adults say they are certain or almost certain to vote in the midterms. Among this group, slightly more indicate they plan to vote for a Republican than a Democrat.

This Ipsos poll was conducted October 13-23, 2022, by Ipsos using the probability-based KnowledgePanel®. This poll is based on a nationally representative probability sample of 1,540 adults age 18 or older. The sample includes 444 Democrats, 431 Republicans, and 665 independents.

This survey was conducted in English and Spanish. The data were weighted to adjust for gender by age, race/ethnicity, education, Census region, metropolitan status, household income, and 2020 vote. The demographic benchmarks came from the 2021 March Supplement of the Current Population Survey (CPS). The 2020 vote benchmark comes from the Federal Election Commission's Official 2020 Presidential General Election Results.

Please note, the methodology section of the topline for Wave(s) 1-3 were updated alongside the Wave 4 release to reflect the weighting scheme and benchmarks used.