New York, May 22, 2020 – Memorial Day weekend has traditionally marked the start of the summer travel season in the United States. Whether travelers seek an exciting adventure or simply a place to relax; nowadays, it does not even matter if the destination is near or far. The world as we know it today is more accessible by air, land, and sea, than it has ever been before; and a growing number of people become empowered each year to fulfill their travel dreams.

This year was poised to be a record-breaking year for tourism in several countries until the COVID-19 outbreak spread, forcing shutdowns around the globe. In the United States alone, a recent Ipsos poll found that many have recently expressed their willingness to go out in public for essentials, but few are eager to fly on an airplane (29%). Many Americans (36%) have already changed their plans for travel this fall, and nearly nine in 10 (88%) perceive there to be risks associated with traveling on an airplane or on mass transit to one’s health. However, four in 10 (41%) Americans plan to travel this summer if it is allowed, and just as many (45%) said they are currently willing to stay in a hotel. While the future of the travel industry remains shrouded with uncertainty, these are initial signs that the indomitable human spirit, as well as our desire to travel, will eventually be rekindled.

Destinations around the globe have also become more appealing. According to our research, the overall intensity in desire to visit countries around the globe – if money was no object – has grown over the past half-decade. A longitudinal analysis of 50 Nation Brands Index (NBI) countries between 2014 and 2019 demonstrates how desire to travel has evolved: it declined between 2014-2016, increased between 2016-2018, and remained flat in 2019. 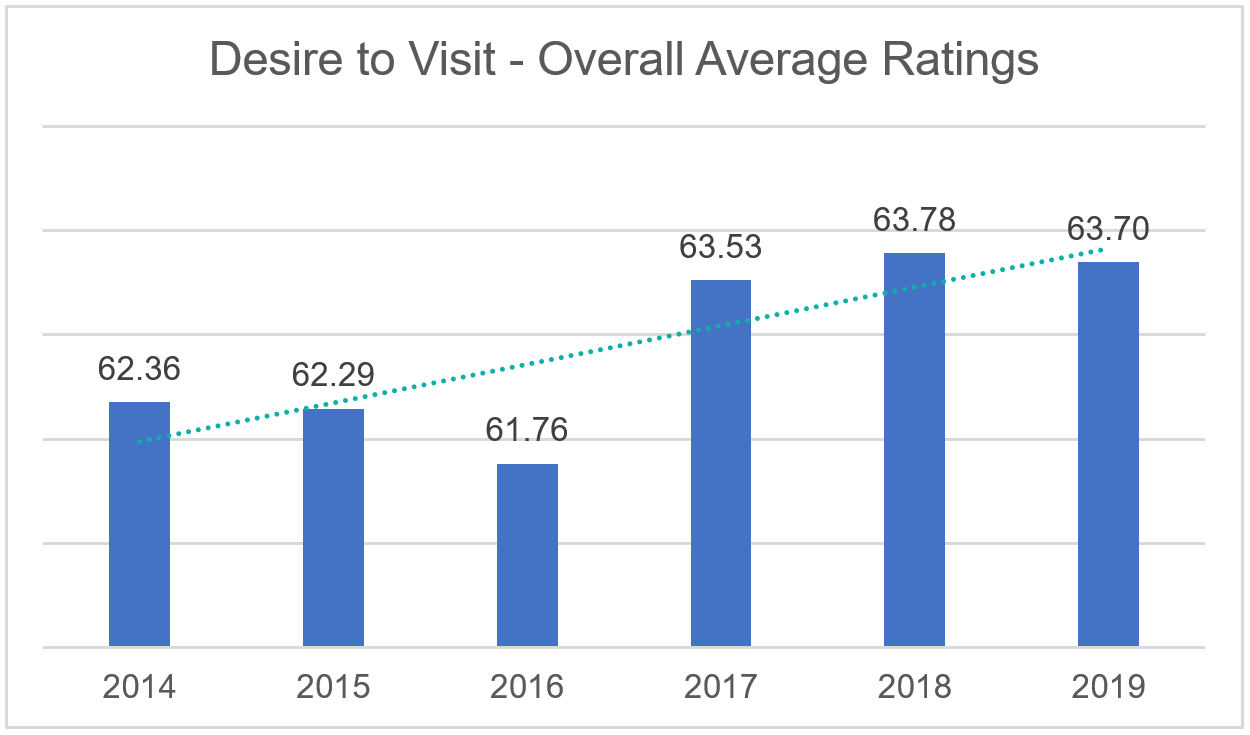 According to the responses of 120,000 global citizens in 20 different nations, the top-five most coveted travel destinations of the last five years have been:

On average, one in 10 global citizen reports having ever visited one of the measured NBI nations, with the most popular destinations being:

Many vacationing global citizens appear to be satisfied with their travel experiences in France, the United States, and Italy, as the intent-of-return rate is nearly 50% for those who have ever visited these destinations. The overlap in both lists demonstrates that the dream to visit Italy and France has become a reality for some. However, the remaining top-5 most desired travel destinations (Canada, Australia, and Switzerland) see fewer lifetime visits from global citizens - showcasing an apparent unattainability of these destinations. Instead, nations like the United States, Germany, and Spain, which rate lower on the travel desirability list, received more lifetime visits.

The most common way of describing tourism in the measured NBI nations are “fascinating,” “exciting,” and “educational.” However, there is some variation by region: tourism in North America and Latin America and the Caribbean is mostly described as “exciting,” in Europe and Asia Pacific it is mostly seen as “fascinating,” while in Africa and the Middle East it is mostly thought to be “risky.”

Managing perceptions, appeal, and desirability of travel destinations can be challenging; and over the past five years, we have observed the most overall ratings decline for desire to visit - even if money was no object - in nations with traditionally strong nation brands:

Conversely, over the same period, we have seen the strongest overall ratings increase for desire to visit - even if money was no object – for the following countries:

The COVID-19 pandemic has clearly become one of the most significant events of our lifetime. It is also reshaping public perception of nations around the world, depending on how each nation manages the crisis. The full extent that the impact that the COVID-19 pandemic will have on tourism flows is still largely unknown, and the recovery process is expected to be slow and challenging – particularly for countries that are still progressively lifting lockdown restrictions and reopening their borders to world travelers. In an effort to better understand the effect of the COVID-19 pandemic on nation brands, 2020 Ipsos’ NBI will further measure and evaluate perceptions of how nations handle healthcare crises and its impact on perceptions and desire to travel. These findings, along with NBI 2020 ratings, will provide critical insight to nations working to manage their brands and restore their tourism sector quickly after the pandemic. Having a deep understanding of current perceptions, in the global context and in these turbulent times, can help guide future communications and marketing efforts for greater likelihood of campaign success.