Washington, DC, April 3, 2020 -- The newest ABC News/Ipsos poll shows that the American public is cooling on President Trump's handling of the coronavirus outbreak. This comes as virtually all Americans report their daily routines changing because of the outbreak and almost universal concern about infection.

Washington, DC, March 20, 2020 -- A new ABC News/Ipsos poll finds that over the last week Americans are dramatically altering their behavior in response to the coronavirus outbreak. Additionally, approval of President Trump’s handling of the response has swung markedly positive.

1. From last week (March 11-12) to this week (March 18-19), the number of Americans who have cancelled or postponed major social activities has almost tripled: 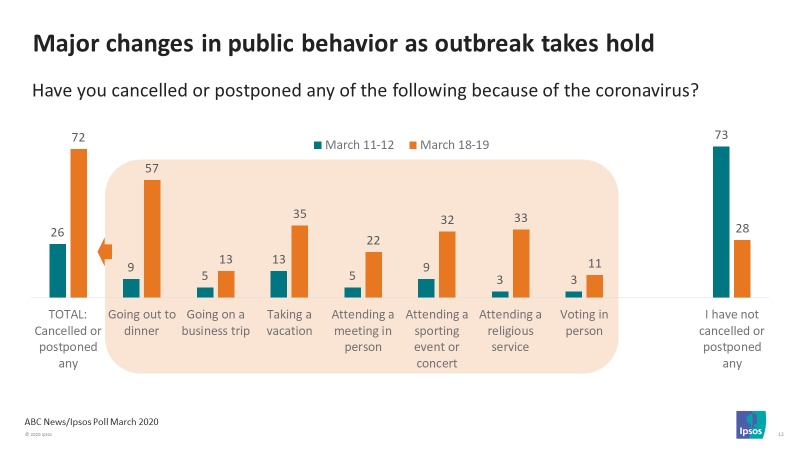 2. Additionally, Americans report major shifts towards working from home or not being currently employed:

This ABC News/Ipsos Poll was conducted March 11th to 12th, 2020 by Ipsos Public Affairs KnowledgePanel® – a division of Ipsos. This poll is based on a nationally representative probability sample of 502 general population adults age 18 or older.

This Wave 2 ABC News/Ipsos Poll was conducted March 18th to 19th, 2020 by Ipsos Public Affairs KnowledgePanel® – a division of Ipsos. This poll is based on a nationally representative probability sample of 502 general population adults age 18 or older.

This Wave 3 ABC News/Ipsos poll was conducted April 1 to April 2, 2020, by Ipsos using the probability-based KnowledgePanel®. This poll is based on a nationally representative probability sample of 559 general population adults age 18 or older.