Washington, DC, November 23, 2022 – The second wave of Ipsos Ukraine Resilience Monitor conducted on October 7 – 20, finds deteriorating access to basic services in newly liberated and frontline cities. The situation in newly liberated cities is stark as only 37% of residents have access to hot water and 43% to heat. Things are not any better in some frontline cities: just 29% of Mykolaiv’s residents have access to safe drinking water and 37% to hot water. Access to heat has also receded since the previous survey wave conducted in early September: only 52% in Mykolaiv have access to heat (3 percentage points less than in September) and 57% in Kharkiv (9 points less).

Despite trying conditions, Ukrainians are eager to return home. Our October survey shows that, on average, four in five respondents who moved to the frontline and newly liberated cities studied since the invasion intend to return home when possible.

Employment rates across the frontline and newly liberated cities surveyed are extremely low: 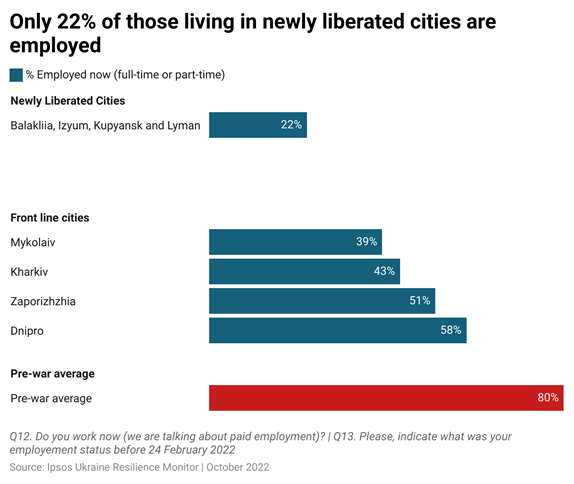 Majorities in newly liberated and front-line cities say that they have experienced a significant loss of income or have no personal income: 79% in newly liberated cities, 75% in Mykolaiv, 74% in Kharkiv, 64% in Zaporizhzhia and 59% in Dnipro. 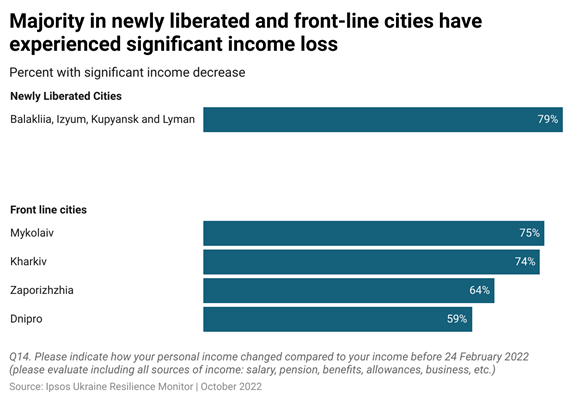 The October survey finds that many essential services have deteriorated and are of significant concern as the country braces for winter. As in the previous wave of this study, most of Mykolaiv’s residents continue to not have any access to safe drinking water -- only 29% do. Only half or fewer in newly liberated cities, Mykolaiv and Zaporizhzhia have access to hot water (37%, 37%, and 52% respectively). 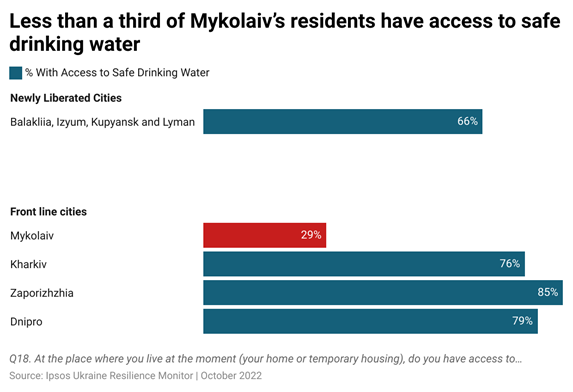 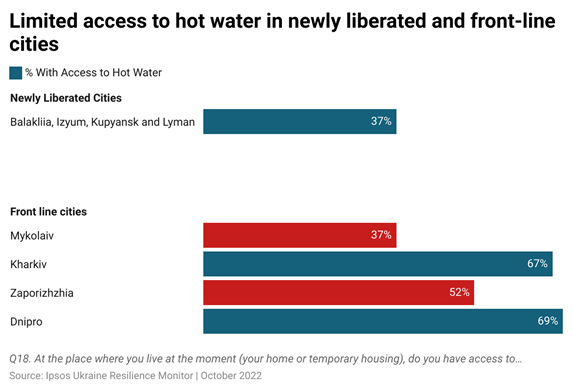 Access to heat is another major concern. In the newly liberated cities surveyed, only 43% have heat. In the frontline cities of Mykolaiv and Kharkiv, which have both been bombed extensively since the beginning of the conflict, only 52% and 57%, respectively, do. Zaporizhzhia and Dnipro are faring slightly better with 64% and 73% of residents reporting access to heat, respectively. 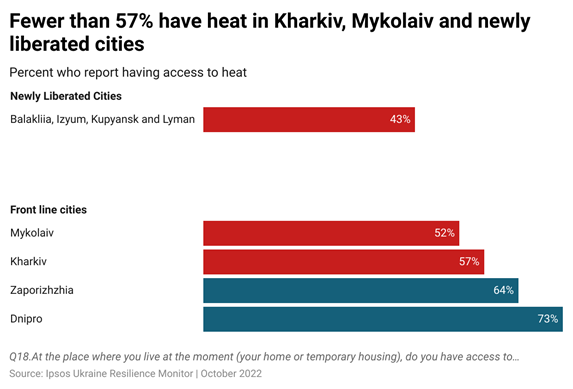 Despite low employment and dwindling access to basic services like heat and water, Ukrainians are determined to return home. The October survey found that, on average across all the cities studied, four in five respondents who moved there since the invasion say plan to return home.

Lastly, unchanged from the previous wave, the October survey wave also finds that Ukrainians believe that rebuilding the country is the responsibility of the Ukrainian government. The majority of respondents in all surveyed cities believe their local and national government is responsible for reconstruction (57% and 60%, respectively on average across all surveyed cities).

These are the findings of an Ipsos survey conducted October 7-20, 2022, among 2,645 adults aged 18-65 currently residing in four frontline cities (Dnipro, Kharkiv, Mykolaiv, and Zaporizhzhia) and four newly liberated cities (Balakliia, Izyum, Kupyansk, and Lyman). The sample consists of 600 adults living in each of the four major cities (601 in Dnipro) and a total of 244 adults living across the four newly liberated cities. Interviews were conducted in Ukrainian on Ipsos’ survey platform.

The sample for each city is balanced by gender and age weight to reflect the structure of the adult population identified in Ipsos’s Stand with Ukraine Barometer – a reference study based on 4,000 interviews over 5 waves/months among adults aged 18-55 residing in cities of 50,000 inhabitants across Ukraine (excluding ATO) with a natural flow on current region, gender and age, and quotas by region and size of the city of residence before February 24, 2022.

The precision of Ipsos online polls is calculated using a credibility interval with a poll of 600 accurate to +/- 4.9 percentage points

For complete results, please refer to the following annotated questionnaire:

Please seelct the location where you lived permanently before February 24, 2022?

Do you have plans to return back to your home location in the next 6 months?

Do you work now (we are talking about paid employment)?

Please, indicate what was your employement status before February 24, 2022?

Please, indicate how has your personal income changed compared to your income before 24 February 2022 (please evaluate including all sources of income: salary, pension, benefits, allowances, business, etc.)?

Do you experience delays in receiving any of regular income payments (salaries, pensions, benefits, etc.) now?

Please, evaluate how easy for someone in the city of [TEXT: CITY Q5] to find a job now?

At the place where you live at the moment (your home or temporary housing), do you have access to

In your opinion, which authority should take the responsibility to plan/execute/oversee the damage reconstruction in the city of [TEXT: CITY Q5]: