More than half a year after George Floyd’s death spurred swift statements about racial justice in the U.S. and around the world, many Americans believe that little has actually changed, according to new data from the Ipsos Coronavirus Consumer Tracker: A full half of Americans believe that while companies spoke out about racism, most didn’t take any action beyond that. The brands with a reputation for their support of social issues are still the usual suspects like Nike and Patagonia. Few new stand-outs emerged, but the entertainment industry provides perhaps the best example of a sector actually making positive strides.

People are no longer surprised by statements about social justice. In June, just weeks after Floyd’s death, 59% of Americans said more companies had spoken out about racism than they expected. Today, only 40% are surprised by the number of companies who spoke out.

“The expectation for companies to take a stance on issues of diversity, equity, and inclusion has been growing for some time, but the events of 2020 placed heightened focus and urgency for business to act,” said Jason McGrath, head of Corporate Reputation at Ipsos. “However, consumers are quick to distinguish between companies that are simply making a statement and those that are making meaningful changes to the way they operate and working to shift their corporate culture.” 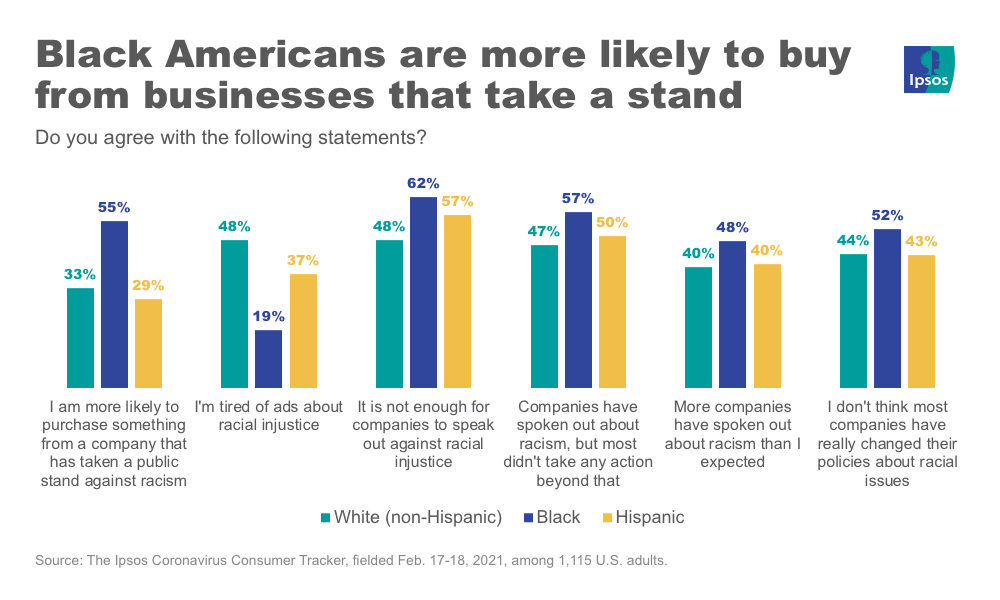 Indeed, Ipsos polling shows that making a statement by itself is unlikely to earn you new customers. The number of Americans who say they’re more likely to purchase something from a company that has taken a public stand against racism has dropped since last summer, from 45% in June to 36% today. But 55% of Black Americans say today that they’re more likely to buy from businesses that take a stand.

Meanwhile, the number of people who say it is not enough for companies to speak out against racial justice has stayed stable around half, sitting at 52% today.

“This is a pretty typical pattern for event-driven responses – it looks a lot like attitudes on guns after a mass shooting,” Jackson said. “As the event recedes from memory, the importance of it also fades and some people drift back to pre-existing positions.” 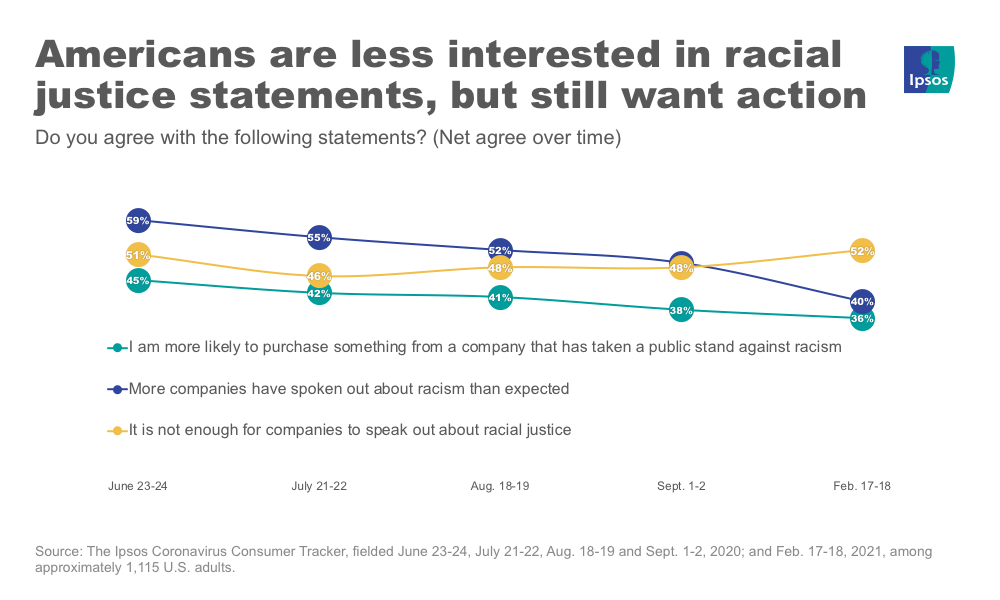 One industry that has been visibly taking action beyond making statements: Entertainment. From traditional broadcast and cable networks to newer streaming video services, many – if not all – have invested in diversity and inclusion efforts, in the form of more diversity-centric shows, casts, showrunners, and overall presence, said Christie Kawada, head of Media Development and Audience Development at Ipsos.

“Media and entertainment, and more specifically television and content, are probably among the most dominant forces affecting our everyday lives; they sit at the heart of our culture,” Kawada said. “The fact that content can now touch everyone equally just speaks to the enormous strides that this industry has taken to diversify, and provide content that is culturally relevant to everyone regardless of identity.”

From brands that are solely devoted to the Black audience like OWN, BET, VH1, and TVOne, to shows like “Insecure” and “Lovecraft Country” on HBO, “The Chi” and “Black Monday” on Showtime, “Dear White People” and “When They See Us” on Netflix, “Black-ish” on ABC, and the world of Shondaland, diversity and the issues that surround it are finally making their way into the sunlight – beyond just a token character, but at the very DNA of the show itself, Kawada said.

“Whether it be the writers and showrunners, the cast, or the stories themselves, diversity now has a voice in Hollywood, and entertainment content in general,” Kawada said. “The gauge to real success here, though, is to ask whether it’s become mainstream – and no, it’s clearly not. Until we can confidently have more shows that feature an all Black, Asian, Hispanic, etc. cast, hitting the top of the ratings, we still have a ways to go.”