According to a new Axios/Ipsos poll, conducted as part of Axios’ Hard Truths series, most Americans from different racial or ethnic backgrounds agree that education is still the great equalizer in America. And yet, eight in ten recognize that public education in this country is unequal, with different outcomes based on where you live. Furthermore, Americans’ own experiences within the educational system vary along racial/ethnic lines.

1. Large majorities of Americans see education as a path to betterment. But just as many recognize that our current education system offers unequal opportunities, and changes must be made. 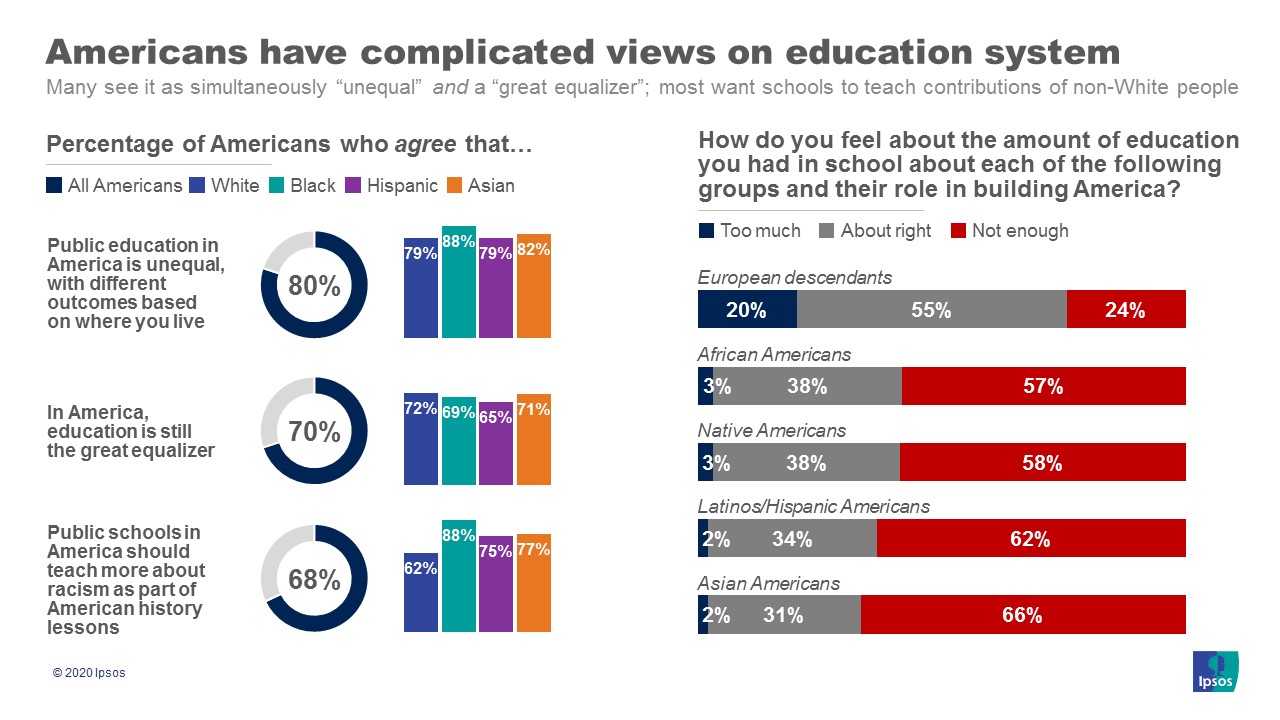 2. Americans appear to be reckoning with America’s past and want to see more taught in schools about the contributions of non-white people.

3. Significant differences emerge along racial lines when asking about public school funding and aspects of their own educational experience.

This Axios/Ipsos Education Inequity poll was conducted November 4th to November 12th, 2020 by Ipsos using our KnowledgePanel®. This poll is based on a nationally representative probability sample of 1,999 general population adults age 18 or older.

The survey was conducted using KnowledgePanel, the largest and most well-established online probability-based panel that is representative of the adult US population. Our recruitment process employs a scientifically developed addressed-based sampling methodology using the latest Delivery Sequence File of the USPS – a database with full coverage of all delivery points in the US. Households are randomly sampled from all available households in the U.S. All persons in selected households are invited to join and participate in KnowledgePanel. Ipsos provides selected households that do not already have internet access a tablet and internet connection at no cost to them. Those who join the panel and who are selected to participate in a survey are sent a unique password-protected log-in used to complete surveys online. As a result of our recruitment and sampling methods, samples from KnowledgePanel cover all households regardless of their phone or internet status and findings can be reported with a margin of sampling error and projected to the general population.