The impeachment trumpets are sounding. This is all the political world can talk about right now. Nearly six in 10 (59%) news headlines feature either impeachment or the related Ukrainian scandal. 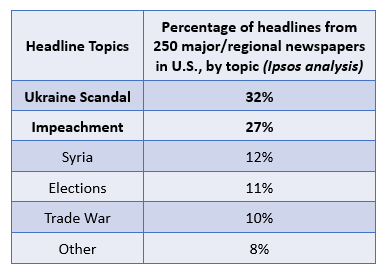 The popular narrative among pundits is that President Trump’s impeachment numbers have worsened over the last few weeks. An increasingly large proportion of Americans support impeachment, but we should use caution when inferring a trend. With so many facets, impeachment sentiment has been measured in a variety of ways. Some measure support for the impeachment inquiry, others are about impeachment itself, while still more examine impeachment and removal from office.

But the gleeful speculation on impeachment is mostly just wishful thinking, as Trump’s approval numbers – the real leading indicators of success or demise – have held steady. Moreover, it is unlikely a sitting president whose party controls the deciding legislative body (in this case, the U.S. Senate) will be removed from office. At this point, by my calculation, there is only a 25% chance of Trump leaving office (Cliff's Take: Impeachment in the Global Context).

However, all this impeachment chatter misses the real threat to American democracy. Simply put: we face a “crisis of confidence” in our American electoral system that calls into question the legitimacy of any electoral outcome.

Last week, my team at Ipsos released a poll in partnership with C-SPAN on Americans’ confidence in our electoral system and voting. The results are as striking as they are worrisome (C-SPAN Washington Journal, Oct. 10) – a warning shot for all Americans worried about our constitutional order.

Only 53% of Americans are confident our 2020 presidential election will be free and fair! More striking are the partisan differences: 72% of Republicans are confident while only 39% of Democrats are. How can a system persist with such division?

Part of the explanation might be political “sour grapes.” In October 2016, a Pew poll with the same question showed an inverted partisan divide: Republicans being the pessimistic ones and Democrats more bullish. 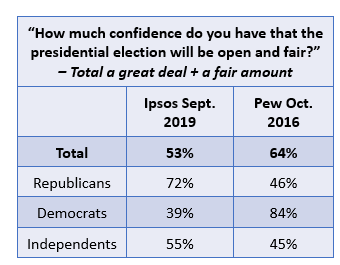 The weak and highly partisan levels of confidence found in our C-SPAN survey look eerily familiar to ones I found measuring the rise of former Venezuelan President Hugo Chávez. As a pollster in Latin America for 10 years, witnessing the wholesale breakdown of confidence in the electoral system there and the aftermath of the fall of democratic regimes in that region, my central fear is this: no matter who wins in 2020, half the population will see the result as illegitimate.

As I see it, there are two distinct reasons for our present state: one acute and the other structural.

On the acute side is foreign intervention and its perceived effect on U.S. electoral outcomes. Almost three in five Americans (58%) believe foreign powers pose a real and credible threat to the 2020 election, and only 31% believe the government has done enough to curb that threat. And Trump is only exacerbating this open wound by incessantly scratching the foreign-influence itch. 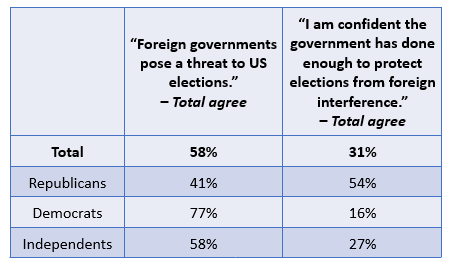 It is clear Americans see the foreign threat through a partisan lens. Despite the assessments of our intelligence agencies and the Senate Select Committee on Intelligence, Americans who identify as Republicans see the threat of foreign interference as far less potent than do Democrats. Again, what do we do when we can’t even agree on the basic facts?

On the structural side, moving away from the Electoral College and, separately, requiring ID to vote, have strong, but again very partisan, support. Even so, there is a hint of common ground, at least on the issue of requiring citizens to show ID to vote. By and large, however, the perceptions of structural inequities – something Americans can’t even agree on at the base level – are driving feelings of disenfranchisement as well. 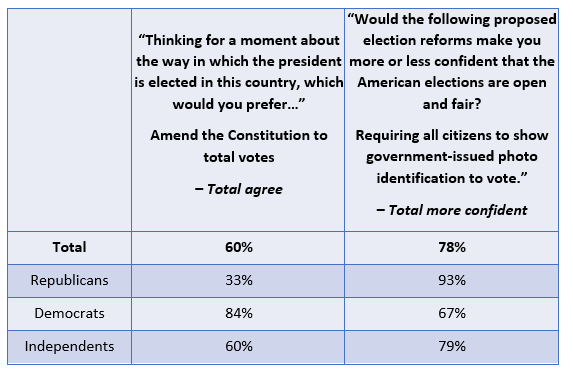 Taken as a whole, regardless of the outcome with the impeachment inquiry the damage is already done. At home, we have fundamental structural disagreements to overcome. And foreign interference, whether involving Russia, Ukraine, or another government, is a key factor in undermining confidence in our system. So how do we survive?

For the next election’s outcome to be viewed as legitimate, each side must take steps to prove they are serious about upholding the integrity of our electoral system. Can Democrats and Republicans come together over stronger election-security legislation in this hyper-partisan impeachment era? For the sake of our democracy, action on both sides needs to come sooner rather than later.