House Democrats have just unveiled two articles of impeachment against President Trump: “abuse of power” and “obstruction of Congress.” Despite a packed news month so far, the impeachment inquiry and ongoing process is the one that has been dominating headlines.

Like so many political and policy issues that the government and Washington grapple with, the concept of impeachment is complex and not as readily understood by the public as pundits and pollsters like to think. It is well understood within the Beltway that the House voting to impeach President Trump is unlikely to end with him being removed from office (since the Senate is disinclined to vote to remove him), but how well understood is this among the public?

So just as we did with these topics and others before (see our ACA polling as far back as 2012 to explore the complexity around American understanding of this issue), Ipsos took a deep dive into how the country understands the issue currently at the top of the news agenda.

And in a perhaps surprising instance of bipartisan “unity”, Democrats and Republicans have roughly the same – albeit not fully accurate – understanding of what impeachment means, as illustrated in the chart below. That said, they diverge in one area: Democrats are more likely to view impeachment as “a tool Congress uses to the check the President” (60%) than Republicans (45%). 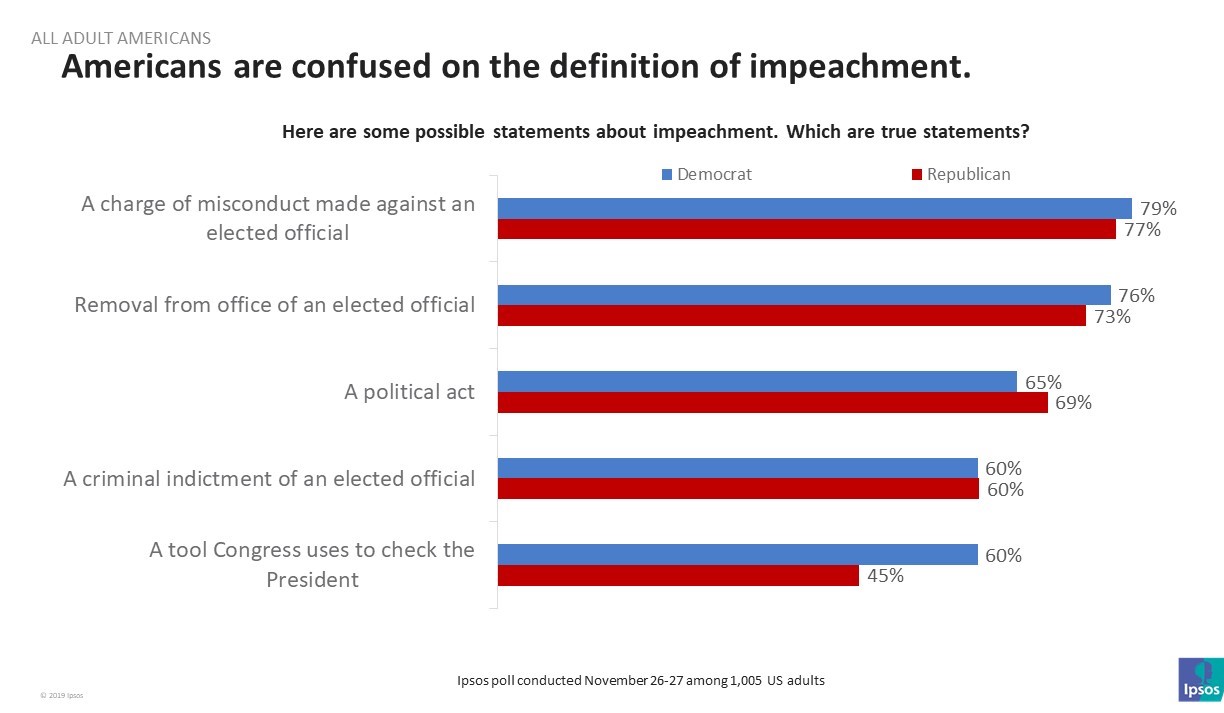 This fairly united (mis)understanding of the concept of impeachment was a little surprising not only because partisans so rarely align on anything, but also because there are other findings from our ongoing polling on impeachment with FiveThirtyEight via our Ipsos KnowledgePanel® that I thought might be explained by partisan views.

Specifically, some dissonance lies in the fact that while 47% (FiveThirtyEight) of Americans believe Trump should be impeached and subsequently removed from office, notably more (57%) believe Trump has committed an impeachable offense. Different questions, of course, but the 10-point gap in agreement here speaks to a disconnect in how Americans view Trump’s actions and the consequences that they think should be meted out in response. 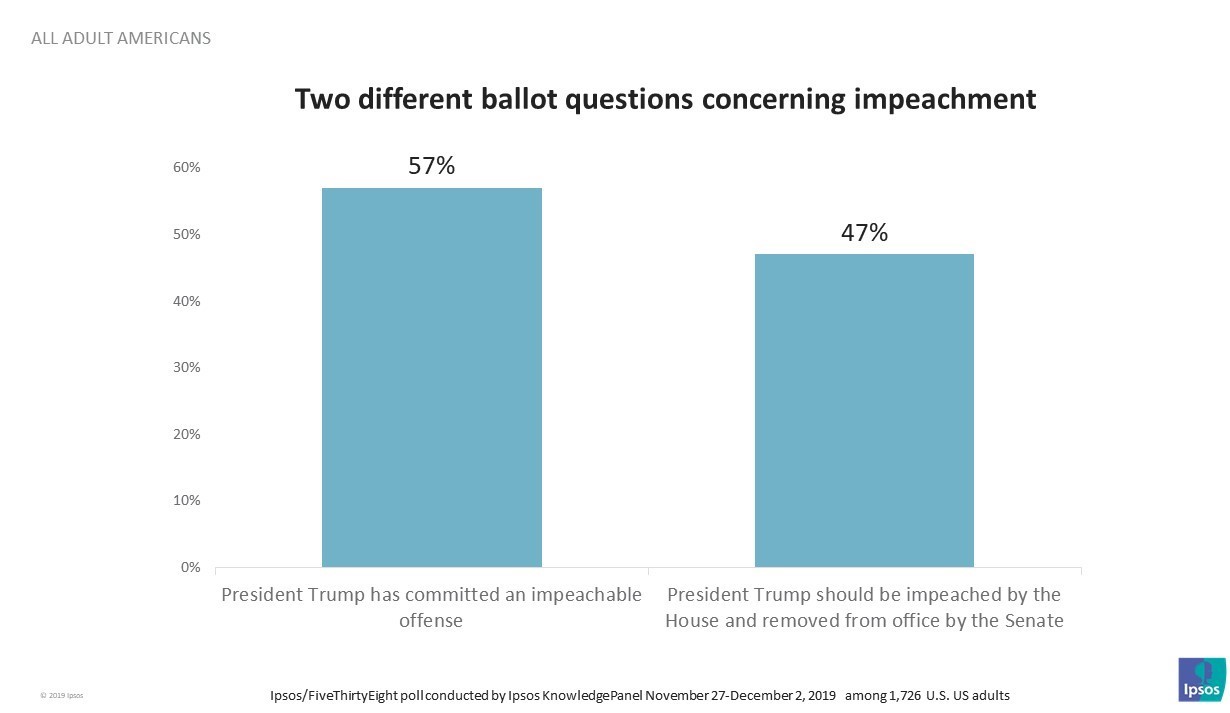 In other words, why, if most Americans think that Trump has done something impeachment-worthy, are more not clamoring for his removal from office?

In part, it’s likely due to how the polling questions are framed. Americans willing to admit the president has done something wrong might have any number of reasons for not wanting to see him actually removed from office. However, my initial theory that this difference may be driven by differential understanding across partisan lines of the consequences of impeachment does not hold water.

So what can we take away from all this? Well, for one, we know that Americans tend to conflate “impeachment” with “removal from office”; and secondly, that slightly less than half of Americans are hoping for that outcome ultimately. Going forward, can we expect more Americans to jump on the “impeach and remove from office” bandwagon?

It seems unlikely, based on the partisan divide in the country today – and historic precedent.

Current opinion (with approximately 47% of Americans in favor of impeaching Trump and 44% against) falls on the midpoint between public attitudes towards President Clinton and President Nixon’s impeachments. Pew offers some insightful context: “between a quarter and a third of Americans favor[ed] Clinton’s impeachment…. contrasted with the Watergate situation, which saw public support for Nixon’s impeachment steadily rise as more and more was learned about the scandal.”

Trump does not enjoy the very high approval ratings that Clinton did, although they share the benefit of sitting on top of a robust economy with low unemployment. And at the same time, as more details about Trump’s dealings in Ukraine come out of the woodwork, his core base appears to be unmoved – as was not the case for Nixon.

Whether Trump’s ratings weather the passage of the impeachment articles as well as Clinton’s did speak to the strength of his base, which – for now at least – seems unshakeable.

My prediction? Impeachment doesn’t dent his approvals a bit.

The correct answers for the phrases shown in the chart above are listed below: