The Fourth of July is almost here – a date that President Joe Biden targeted earlier this year as the point where enough Americans would be vaccinated that we could safely see family and friends. But with the world largely reopened and people returning to their old lives, few Americans appear to be planning a bigger celebration for the nation’s birthday than they held in the past.

Less than one in ten Americans (8%) plan to celebrate in a bigger way this year than they did before COVID, according to the latest data from the Ipsos Coronavirus Consumer Tracker. That number holds relatively stable despite whether people identify as Democrat, Republican or independent.

For food and beverage brands, this isn’t bad news: The Fourth of July is the No. 1 holiday for at-home beer sales, according to the National Beer Wholesalers Association, and Americans plan to spend $7.5 billion on food for the holiday this year, according to WalletHub.

“The world has much to celebrate this year, but one of the great things about America is that celebrations come in all shapes and sizes, as cultures from around the globe meld together,” said Ivana Sinclair, a senior client officer for Ipsos in the food and beverage sector. “Whether it’s a small gathering with family or a blowout barbecue, the Fourth of July is a great moment to reflect on the pandemic, and toast to our future.” 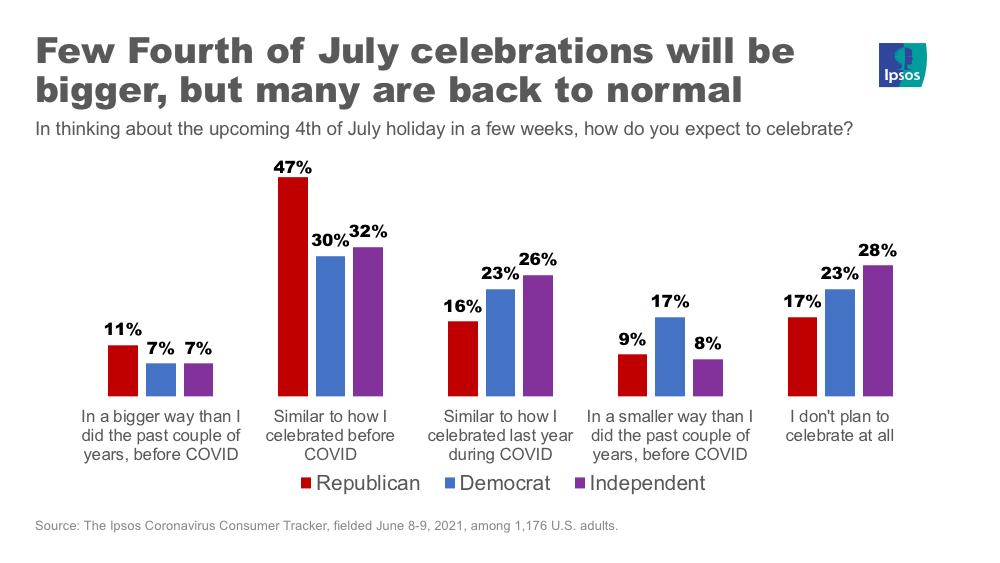 There are larger splits when breaking down the size of the celebrations by political affiliation: Nearly twice as many Democrats (17%) say they plan a smaller celebration this year compared to Republicans (9%) and independents (8%).

One in five Americans (22%) say they don’t plan to celebrate at all – including nearly one in three Americans older than 55 (31%). They’re more than twice as likely to say they’re staying home than young adults aged 18-34 (14%).

While Americans may not be exploding back into the world for the Fourth of July, the overall trend is promising for brands – especially as they look ahead to holidays in the second half of 2021.