Washington, DC, May 20, 2021 — As concerns over the coronavirus pandemic begin to recede, immigration is a growing concern for some Americans, according to a new NPR/Ipsos poll. A majority also say the situation at the U.S.-Mexico border is a major problem, and many think the amount of migrants crossing the border is higher than both what the news reports, and the number who have crossed in previous years. Views about immigration – both in regards to policy changes and general attitudes toward immigrants – remain deeply partisan, and the issue itself is much more top of mind for Republicans than Democrats.

1. Concerns about the situation at the border are widespread. Though there is partisan agreement that the situation is dire, those on opposite sides of the aisle don’t agree on solutions.

2. How to handle the situation at the border is just one example of the deep partisan divide that exists on this issue.

3. Last year, most Americans favored restricting immigration during the coronavirus pandemic in a number of ways. Support for these actions has somewhat waned now, though most are still in favor of international travel restrictions.

4.Most Americans remain in favor of reforming our immigration system to allow certain immigrants, under specific circumstances, to have a pathway to citizenship. 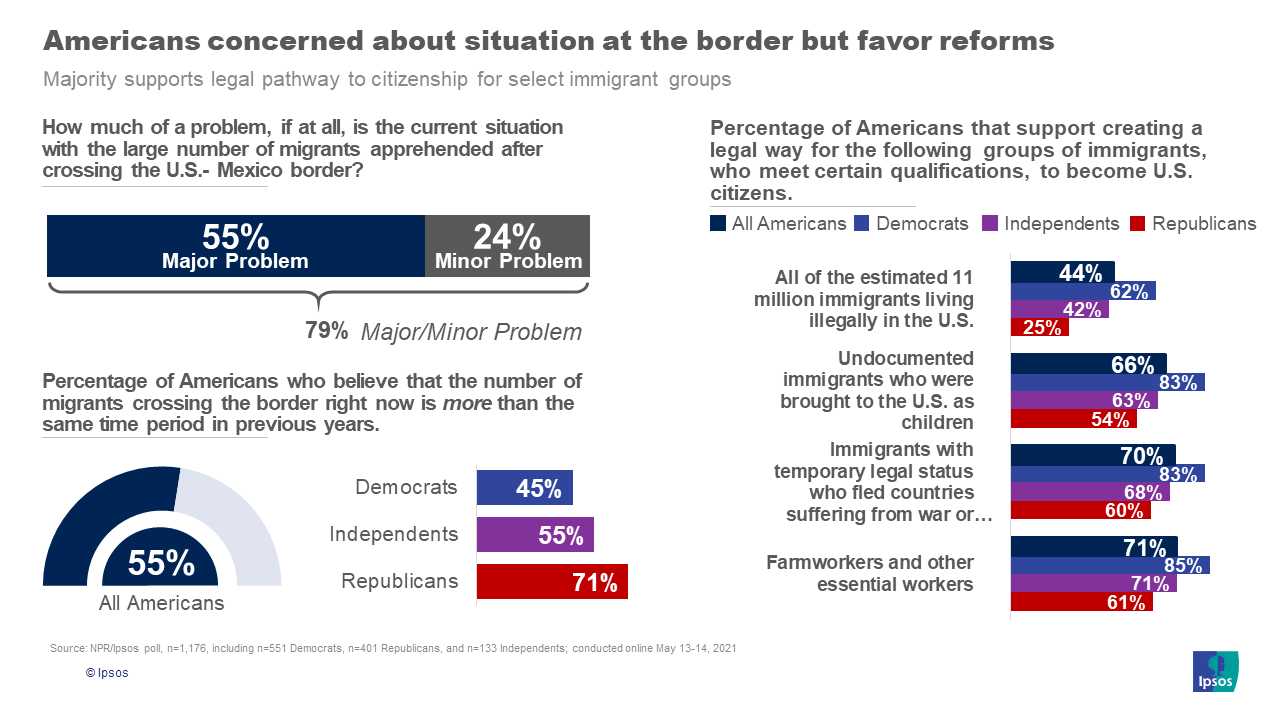 These are some of the findings of an NPR/Ipsos poll conducted between May 13-14, 2021. For this survey, a sample of 1,176 adults age 18+ from the continental U.S., Alaska, and Hawaii was interviewed online in English. The sample includes 551 Democrats, 401 Republicans and 133 Independents.

Statistical margins of error are not applicable to online non-probability polls. All sample surveys and polls may be subject to other sources of error, including, but not limited to coverage error and measurement error. Where figures do not sum to 100, this is due to the effects of rounding. The precision of Ipsos online polls is measured using a credibility interval. In this case, the poll has a credibility interval of plus or minus 3.3 percentage points for all respondents. Ipsos calculates a design effect (DEFF) for each study based on the variation of the weights, following the formula of Kish (1965). This study had a credibility interval adjusted for design effect of the following (n=1,176, DEFF=1.5, adjusted Confidence Interval=+/-4.8 percentage points).