A new Axios/Ipsos poll of Latino American adults explores their position on three key policy items ahead of the 2022 midterm elections: climate change, police reform, and immigration. The poll finds that while a majority of Latino Americans’ preferences generally align with Democratic-leaning positions on issues around climate change and crime/policing, views are more evenly split on immigration and how open our borders should be. 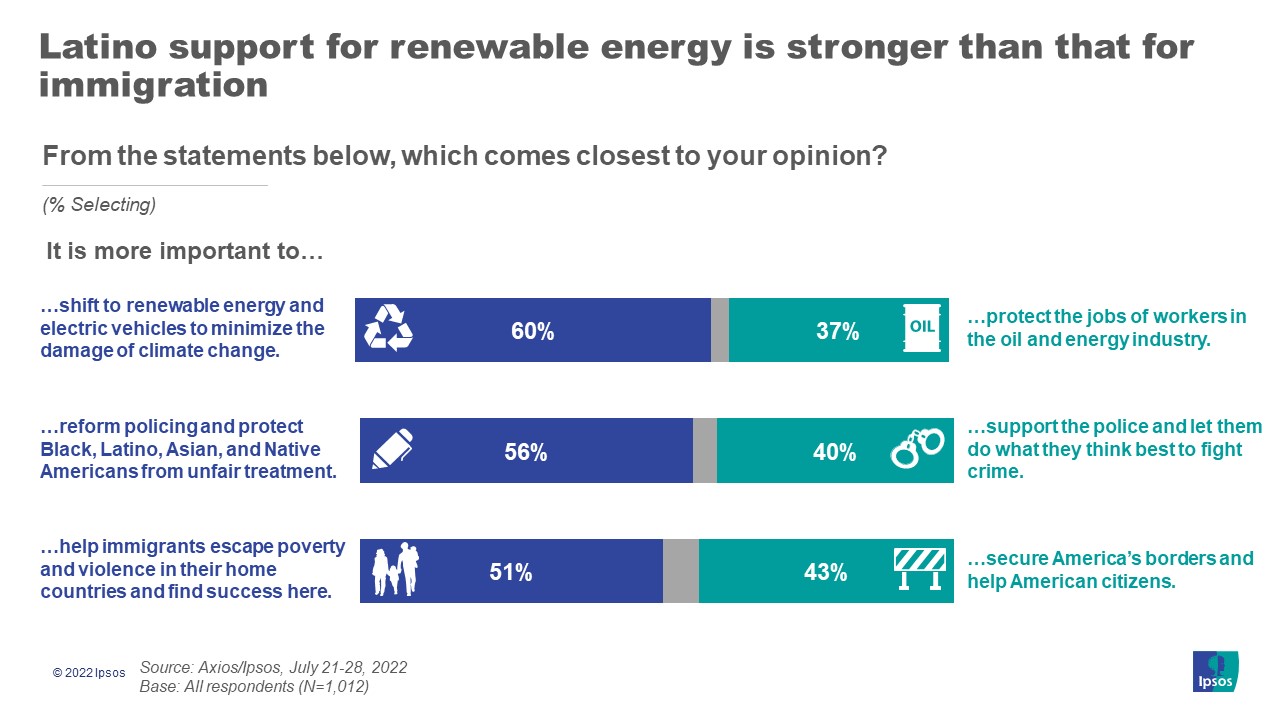 Read more about this here.

The Axios/Ipsos U.S. Latino Survey July Pulse 2022 was conducted July 21th through July 28th, 2022 by Ipsos using our KnowledgePanel®. This poll is based on a nationally representative probability sample of 1,012 Latino/Hispanic adults age 18 or older in the United States.

The survey was conducted using KnowledgePanel, the largest and most well-established online probability-based panel that is representative of the adult US population. Our recruitment process employs an addressed-based sampling methodology using the latest Delivery Sequence File of the USPS – a database with full coverage of all delivery points in the US. Households invited to join the panel are randomly selected from all available households in the U.S. Persons in the sampled households are invited to join and participate in the panel. Those selected who do not already have internet access are provided a tablet and internet connection at no cost to the panel member. Those who join the panel and who are selected to participate in a survey are sent a unique password-protected log-in used to complete surveys online. As a result of our recruitment and sampling methodologies, samples from KnowledgePanel cover all households regardless of their phone or internet status and findings can be reported with a margin of sampling error and projected to the general population.

The study was conducted in both English and Spanish. The data were weighted to adjust for gender by age, education, language proficiency, Latino/Hispanic origin, household income, Census region, metropolitan status, and 2020 vote choice. Demographic benchmarks, among Latino/Hispanic adults age 18+, came from the 2021 Current Population Survey (CPS) with language proficiency from the 2019 American Community Survey (ACS). Benchmarks for 2020 Vote choice among the US Latino/Hispanic population came from Census pot-election survey and Pew 2021 validate voter survey. The weighting variables and categories were as follows: