Washington, DC, April 19, 2021 — On Thursday, April 15th, Congressional Democrats introduced a bill aiming to expand the Supreme Court from 9 to 13 justices. Democratic leaders like Nancy Pelosi have already expressed some opposition to this proposal but Americans do seem to agree that there are things about the Supreme Court that need to change. Only 10% of Americans have a great deal of confidence in the Supreme Court, and while 39% have a fair amount, 15% have no confidence at all in it.

While only 38% of Americans supported the idea of increasing the size of the court from 9 to 13 justices, 63% at least somewhat support imposing term or age limits on Supreme Court seats. This support is mainly driven by Democrats (71%), but Republicans (60%) and independents (64%) appear to be on board as well. Finally, 48% support forming a commission to study the structure of the Supreme Court, which President Biden did last week. This proposal has the most support among Democrats (65%), but only has 34% of Republicans’ support. 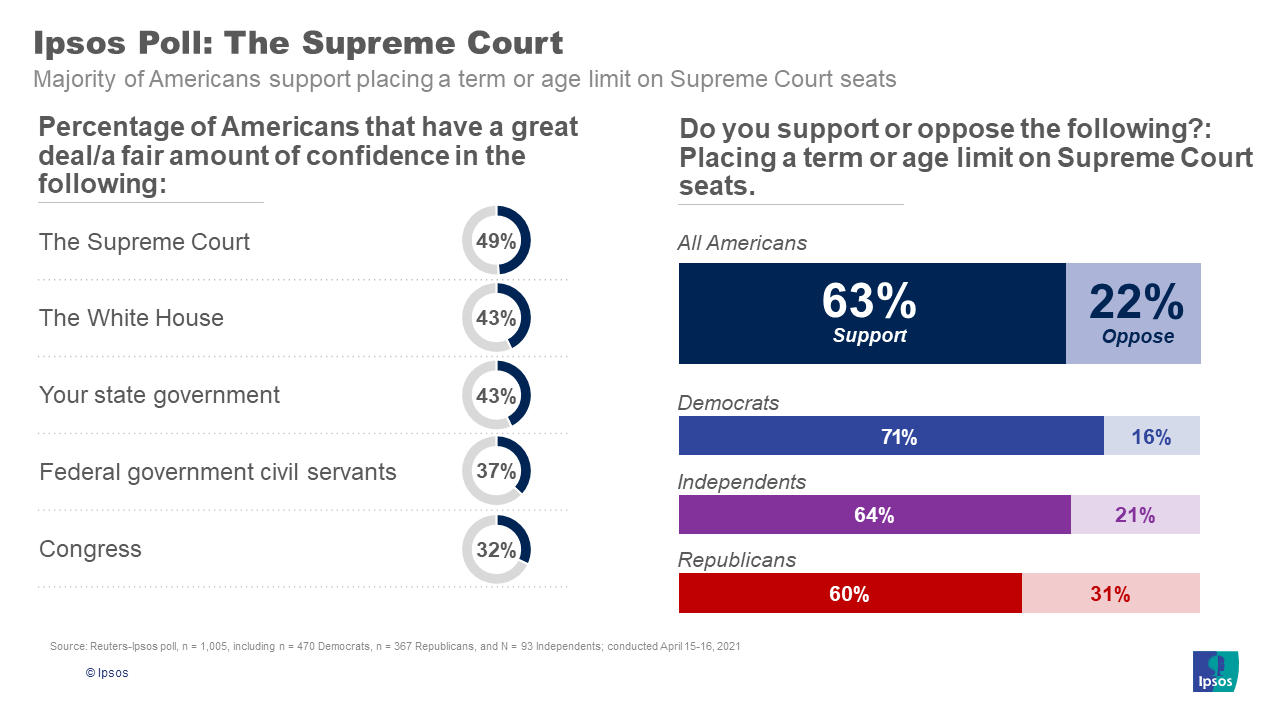 These are some of the findings of an Ipsos poll conducted between April 15-16, 2021. For this survey, a sample of 1,003 adults age 18+ from the continental U.S., Alaska, and Hawaii was interviewed online in English. The sample includes 470 Democrats, 367 Republicans, and 93 Independents.

Statistical margins of error are not applicable to online non-probability polls. All sample surveys and polls may be subject to other sources of error, including, but not limited to coverage error and measurement error. Where figures do not sum to 100, this is due to the effects of rounding. The precision of Ipsos online polls is measured using a credibility interval. In this case, the poll has a credibility interval of plus or minus 3.5 percentage points for all respondents. Ipsos calculates a design effect (DEFF) for each study based on the variation of the weights, following the formula of Kish (1965). This study had a credibility interval adjusted for design effect of the following (n=1,003, DEFF=1.5, adjusted Confidence Interval=+/-5.0 percentage points).