Washington, DC, January 19, 2021 — In the wake of the January 6th storming of the U.S. Capitol, Ipsos took another look at beliefs toward misinformation and election-related conspiracy theories. There is over a 60-point gap between Democrats and Republicans regarding whether Joe Biden legitimately won the 2020 presidential election, a sign of how politically divided this country is, and what facts we are willing to accept. Following the attack last week, most Americans see the people who entered the Capitol as criminals or right-wing domestic terrorists and, as a result, support the suspension of the president’s social media accounts.

Most of the American public views the people who entered the Capitol as criminals or right-wing domestic terrorists. A plurality support social media outlets removing President Trump and QAnon accounts as a result of the event. 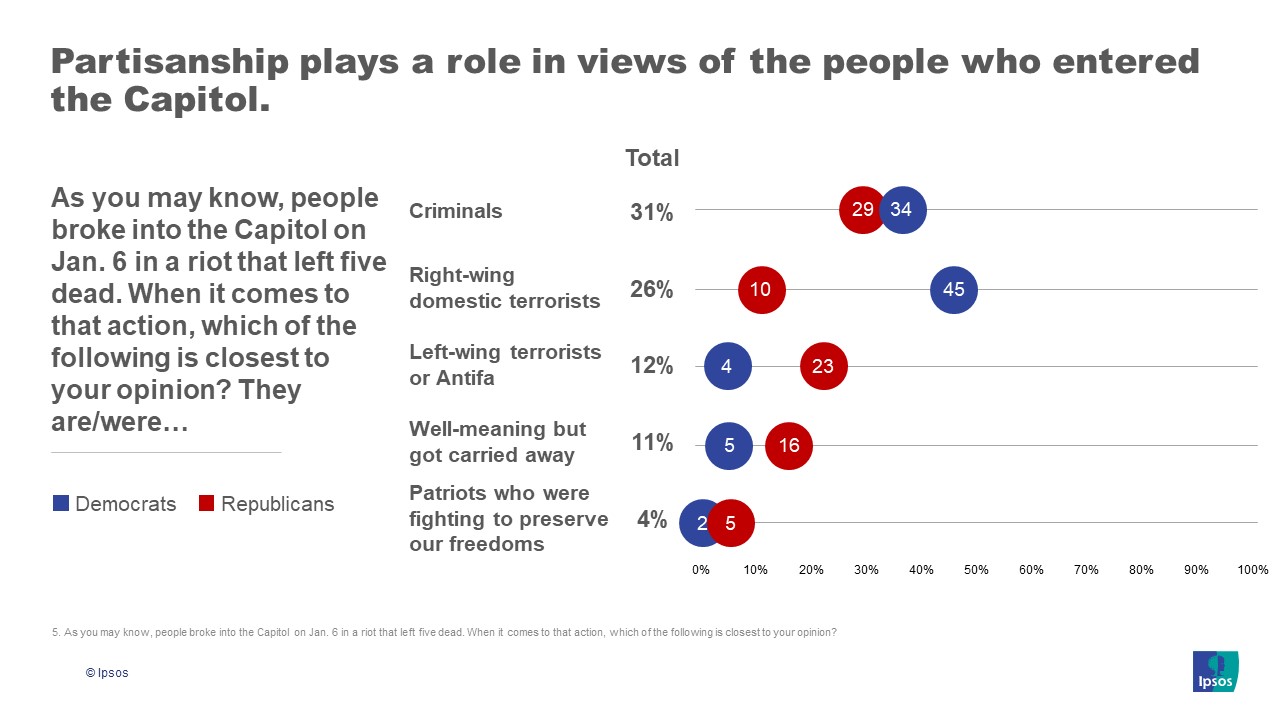 Some conspiracy theories around the Capitol unrest are already taking hold among the American public.

When it comes to views toward other conspiracy theories, beliefs have not changed significantly since last month. Deep partisan cleavages remain, though, and most Americans score poorly on a misinformation ‘knowledge test.’

Concerns about political violence over the next four years and misinformation on social media remain high and, in some cases, have slightly increased from last month. At the same time, more Americans than before want to see a smooth transition of power in the executive branch.

These are some of the findings of an Ipsos poll conducted between January 14-15, 2021. For this survey, a sample of 1,114 adults age 18+ from the continental U.S., Alaska, and Hawaii was interviewed online in English with oversamples of Black and Hispanic Americans. This poll is trended against a NPR/Ipsos poll conducted between December 21-22, 2020, with a sample of 1,115 U.S. adults.

Statistical margins of error are not applicable to online non-probability polls. All sample surveys and polls may be subject to other sources of error, including, but not limited to coverage error and measurement error. Where figures do not sum to 100, this is due to the effects of rounding. The precision of Ipsos online polls is measured using a credibility interval. In this case, the poll has a credibility interval of plus or minus 3.3 percentage points for all respondents. Ipsos calculates a design effect (DEFF) for each study based on the variation of the weights, following the formula of Kish (1965). This study had a credibility interval adjusted for design effect of the following (n=1,114, DEFF=1.5, adjusted Confidence Interval=+/-4.8 percentage points).

The poll fielded from December 21-22, 2020, has a credibility interval of plus or minus 3.3 percentage points.