Washington, DC, August 18, 2022 – Over half of American adults believe it is either completely or somewhat true that the U.S. is experiencing an invasion at the southern border, according to a new NPR/Ipsos poll. Moreover, half believe there is at least some truth to the view that migrants bringing fentanyl and other illegal drugs over the southern border are responsible for the increases of overdoses in the U.S. These statements, and others like them that were tested in this survey, shed light on how misleading information or politically charged rhetoric about immigration has taken root among a significant portion of the American public. Overall, perceptions about immigrants and immigration policy depend heavily not only on one’s party affiliation, but also their media consumption habits. 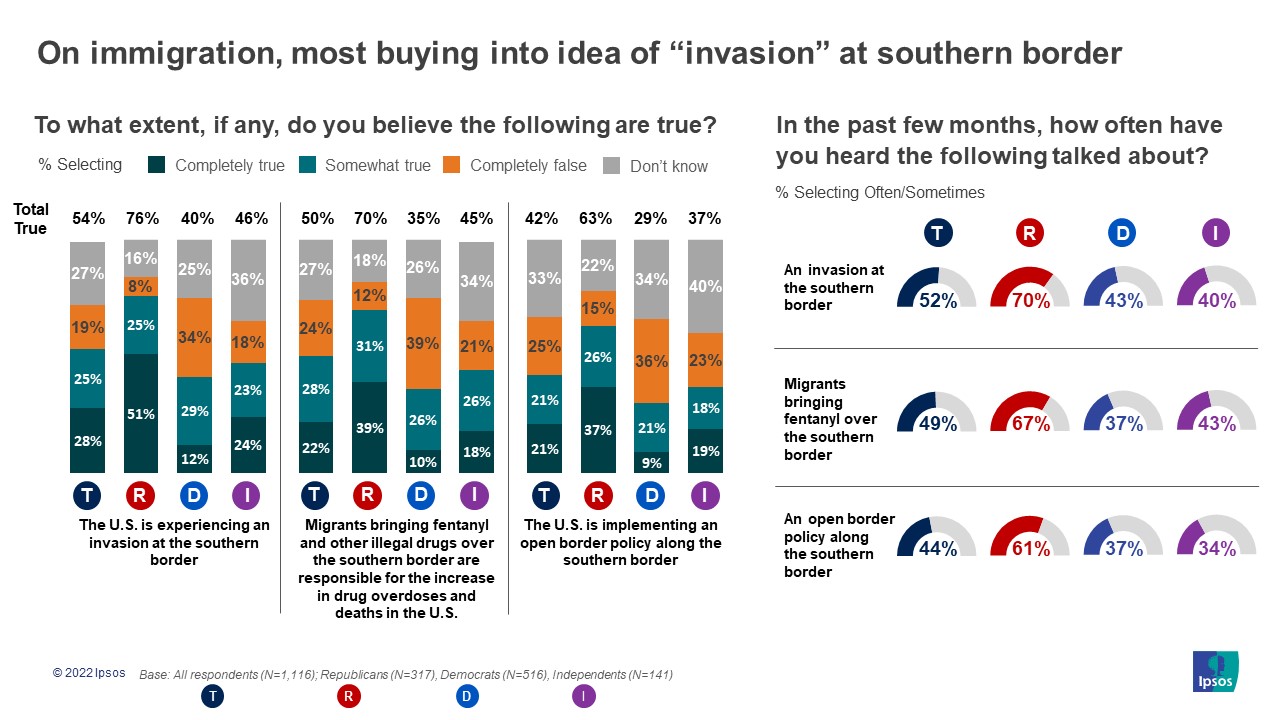 1. Across a series of true or false statements, Americans demonstrate uncertainty about immigrants and immigration policy. At the same time, this polling shows that immigration is not a top a concern, though it is more important among Republicans.

2. Many Americans report hearing misleading or politically charged information regarding immigrants and immigration policy. While one’s party affiliation is a broad indicator for believing truth in these statements, media consumption plays a significant role.

3. Support for ‘dreamers’ has eroded over the past four years, while support for a wall along the southern border has increased. Fewer Americans today believe that immigrants are an important part of our American identity than in January 2018.

The sample for this study was randomly drawn from Ipsos’ online panel, partner online panel sources, and “river” sampling and does not rely on a population frame in the traditional sense. Ipsos uses fixed sample targets, unique to each study, in drawing a sample. After a sample has been obtained from the Ipsos panel, Ipsos calibrates respondent characteristics to be representative of the U.S. Population using standard procedures such as raking-ratio adjustments. The source of these population targets is U.S. Census 2019 American Community Survey data. The sample drawn for this study reflects fixed sample targets on demographics. Posthoc weights were made to the population characteristics on gender, age, race/ethnicity, region, and education.

Statistical margins of error are not applicable to online non-probability polls. All sample surveys and polls may be subject to other sources of error, including, but not limited to coverage error and measurement error. Where figures do not sum to 100, this is due to the effects of rounding. The precision of Ipsos online polls is measured using a credibility interval. In this case, the poll has a credibility interval of plus or minus 3.6 percentage points for all respondents. Ipsos calculates a design effect (DEFF) for each study based on the variation of the weights, following the formula of Kish (1965). This study had a credibility interval adjusted for design effect of the following (n=1,116, DEFF=1.5, adjusted Confidence Interval=+/-5.1 percentage points).