Washington, DC, June 11, 2021 — Less than one month before the Democratic mayoral primary in New York City, Eric Adams has overtaken Andrew Yang as the top vote-getter, but still remains far from the needed 50% +1 majority, according to a new Spectrum News NY1/Ipsos poll. Around one in five likely Democratic voters say Adams is their first choice, followed by Yang and the fast-rising Kathryn Garcia, who has nearly doubled her name recognition and quadrupled her share of first-choice votes since the previous NY1/Ipsos poll in April. The poll also finds that crime has overtaken COVID-19 as the most important issue for both voters and the overall population, with almost half of voters saying it should be the top priority for the next New York City mayor to address. 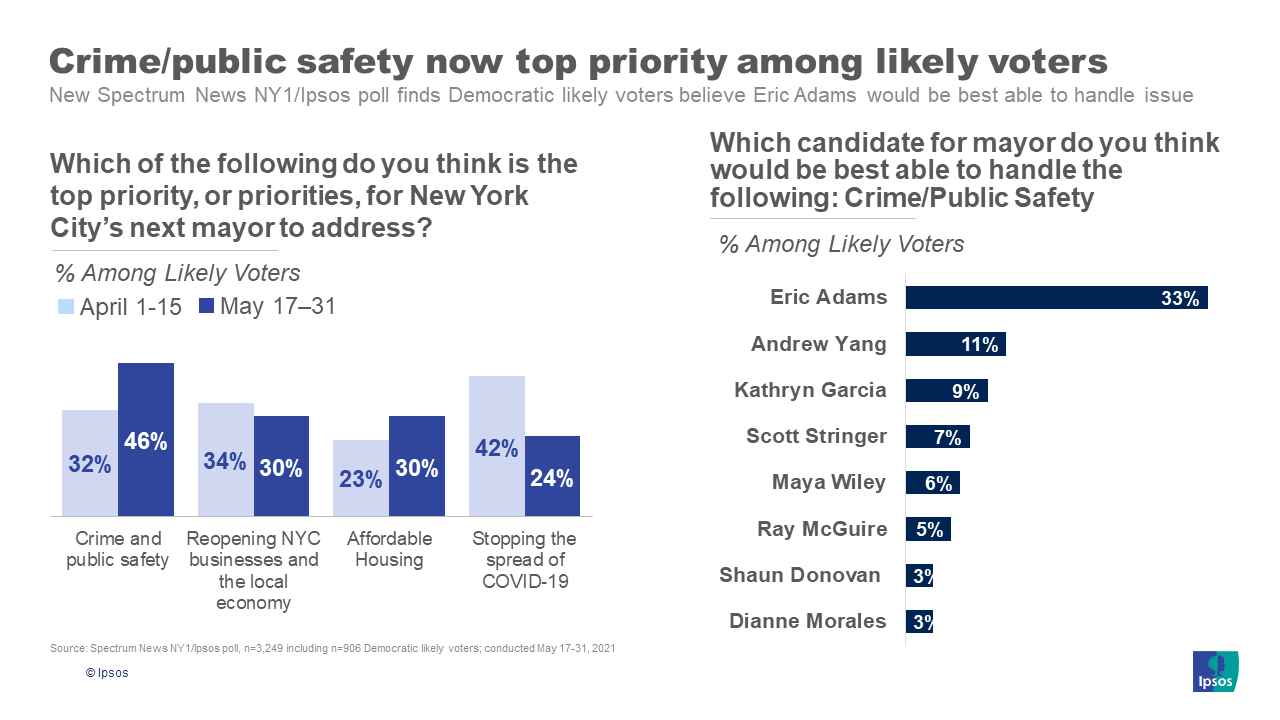 Follow the links below to see more from Spectrum News NY1:

This Spectrum News NY1/Ipsos NYC mayoral primary poll was conducted May 17 to 31, 2021, by Ipsos using the KnowledgePanel®, supplemented by the SSRS Probability Panel, the Ipsos opt-in iSay panel and panel partners. This poll is based on a representative sample of 3,249 residents of the 5 New York City boroughs age 18 or older. 532 completes came from Ipsos’ KnowledgePanel®, 204 from SSRS and 2,513 from opt-in sample.

The study was conducted in both English and Spanish. The data were weighted to adjust for gender by age, race/ethnicity, education, NYC borough/county, and household income. The demographic benchmarks came from the 2014-2018 American Community Survey (ACS) 5-year file from the US Census Bureau. Additional adjustments were included for the sample that supplemented KnowledgePanel® to reduce biases known to be associated with non-probability samples, including amount of television watching, time spent on the internet, frequency of expressing political opinions online, and likelihood of being an early adopter of new products and technology. Benchmarks for these additional weighting variables were from the weighted KnowledgePanel® sample in wave 1. The weighting categories were as follows: