A new Reuters/Ipsos poll fielded ahead of the Congressional January 6th Select Committee’s hearing on July 21 finds that while most Americans have been exposed to coverage of the hearings, their opinions on the events of that day remain largely unchanged.

The poll finds that three in five Americans (61%) have seen or heard coverage about the hearings, largely driven by Democrats who say they have heard or seen coverage (84%). Despite partisan differences, though, over half of Republicans and independents (52% each) have also been exposed to coverage of the hearings, suggesting high penetration of media coverage, regardless of party affiliation. Of those who did see or hear anything about the hearings, 46% of Americans say they followed them closely. 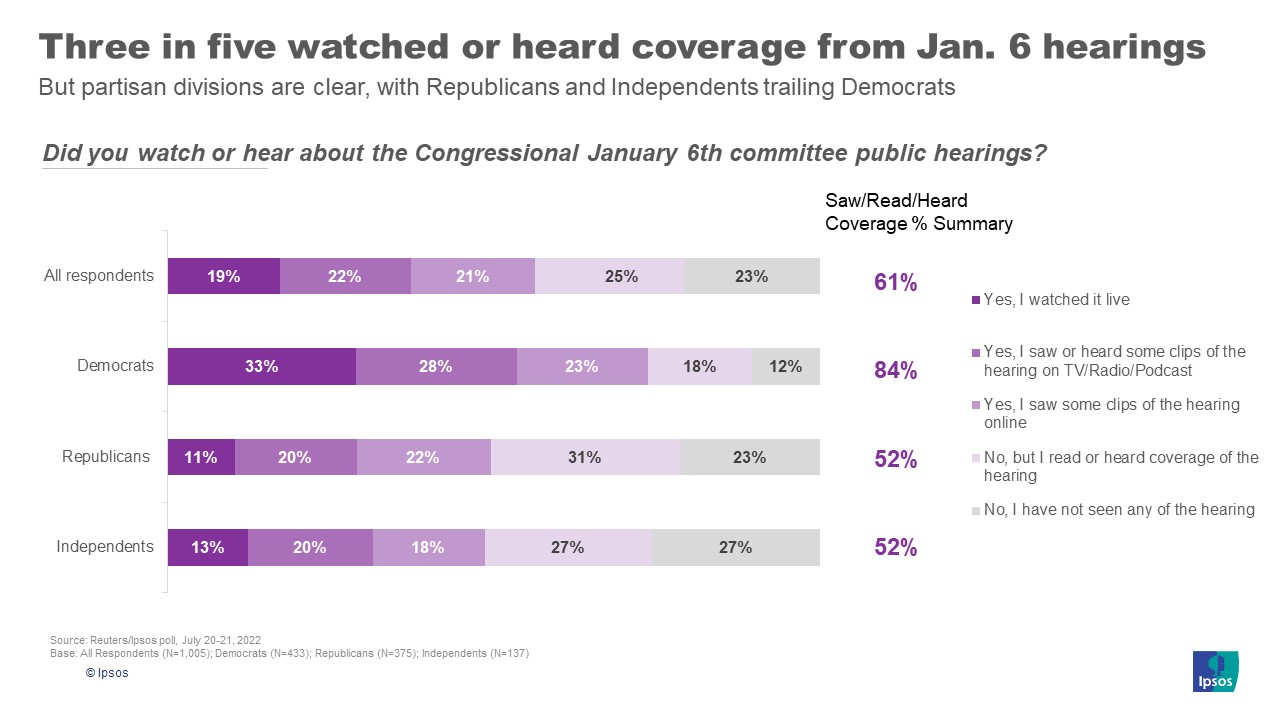 The poll also finds that Americans continue to blame Trump (51%) and the Proud Boys (53%) most for the events at the Capitol, unchanged from perceptions prior to the hearings. Similarly, the percentage of Americans who consider the Jan 6th protesters to have committed criminal acts (64%) rather than expressing their First Amendment rights (36%) has remained relatively constant since before the hearings began. 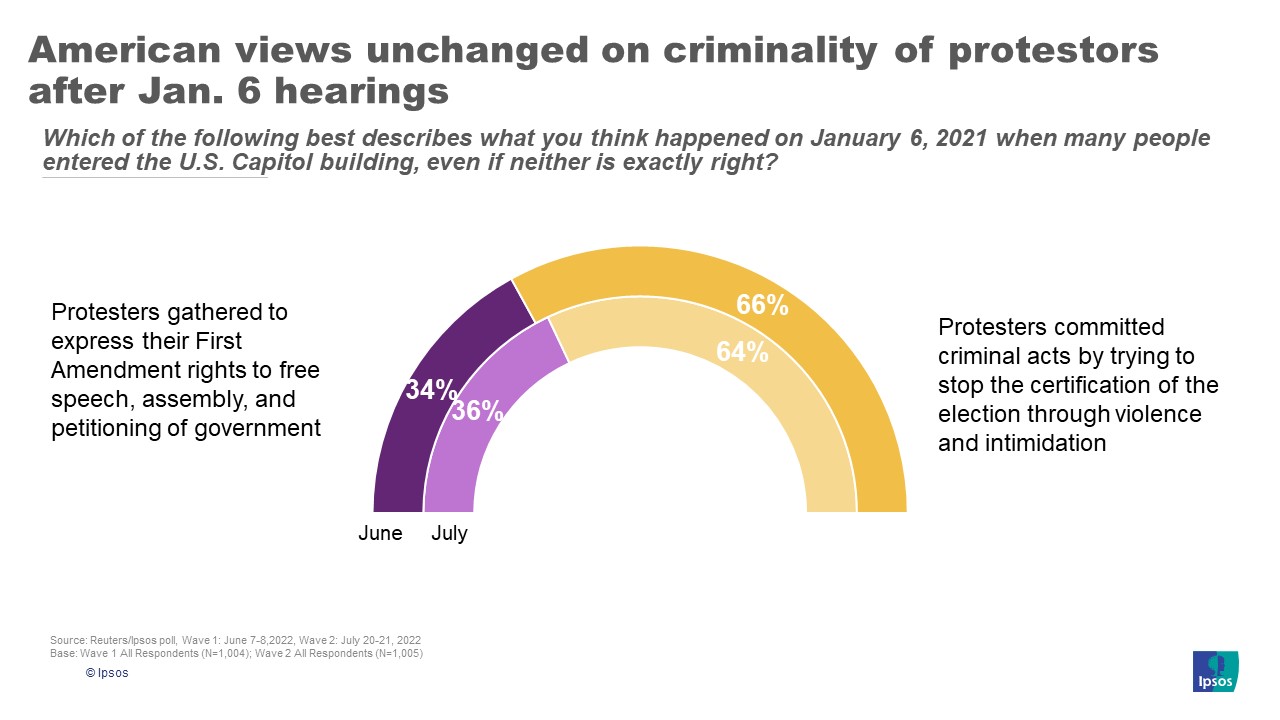 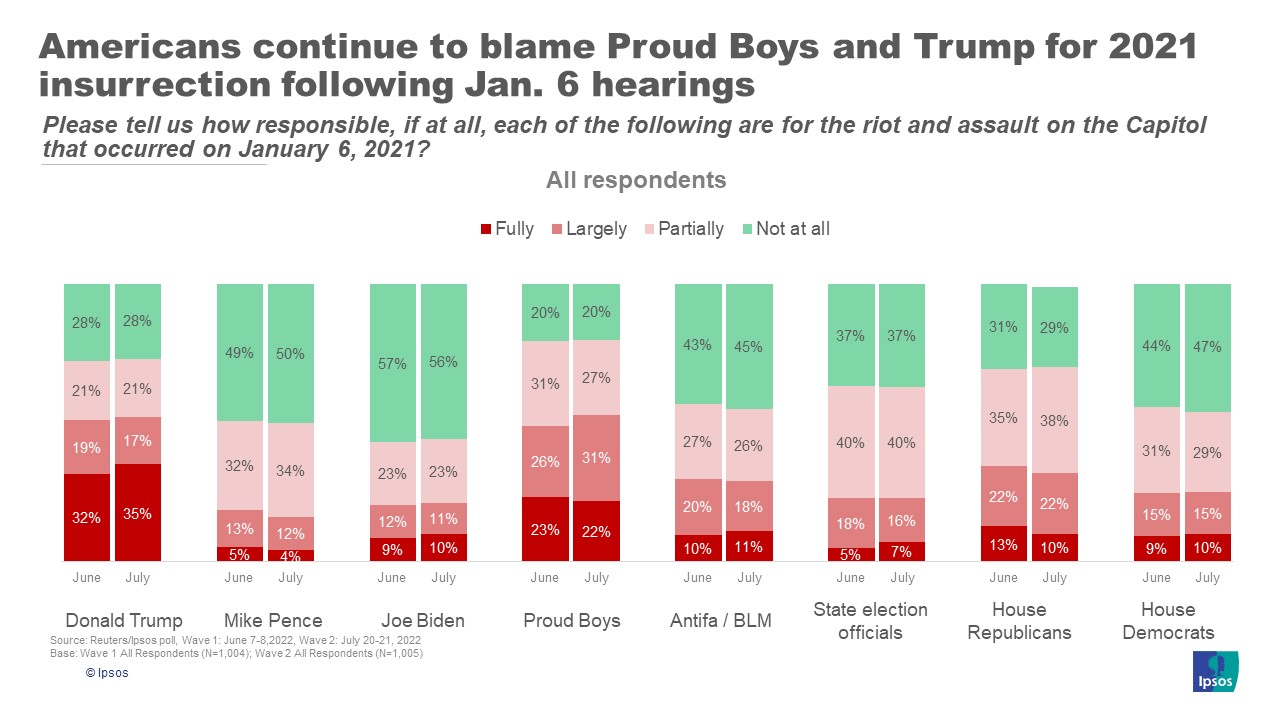 The Congressional Committee has completed their summer hearings, but they reserve the right to hold further hearings later on. They plan to publish their findings in the fall.

These are some of the findings of an Ipsos poll conducted between July 20-21, 2022 on behalf of Thomson Reuters. For this survey, a sample of 1,005 adults age 18+ from the continental U.S., Alaska, and Hawaii was interviewed online in English.

The sample was randomly drawn from Ipsos’ online panel, partner online panel sources, and “river” sampling and does not rely on a population frame in the traditional sense. Ipsos uses fixed sample targets, unique to each study, in drawing a sample. After a sample has been obtained from the Ipsos panel, Ipsos calibrates respondent characteristics to be representative of the U.S. Population using standard procedures such as raking-ratio adjustments. The source of these population targets is U.S. Census 2019 American Community Survey data. The sample drawn for this study reflects fixed sample targets on demographics. Posthoc weights were made to the population characteristics on gender, age, race/ethnicity, region, and education.

Statistical margins of error are not applicable to online non-probability polls. All sample surveys and polls may be subject to other sources of error, including but not limited to coverage error and measurement error. Where figures do not sum to 100, this is due to the effects of rounding. The precision of Ipsos online polls is measured using a credibility interval. In this case, the poll has a credibility interval of plus or minus 3.8 percentage points for all respondents. Ipsos calculates a design effect (DEFF) for each study based on the variation of the weights, following the formula of Kish (1965). This study had a credibility interval adjusted for design effect of the following (n=1,005, DEFF=1.5, adjusted Confidence Interval=+/-5.3 percentage points).