As of early October, just 38% of Americans say they would get an early iteration of the coronavirus vaccine, down 10-points from late August. Beyond the small subset of Americans who reject vaccines altogether, most of the wariness about the coronavirus vaccine appears to be linked to the intense partisanship around the coronavirus pandemic in the Unites States. Particularly as President Trump has talked-up a vaccine before the election, comfort with taking a first-generation vaccine has fallen. 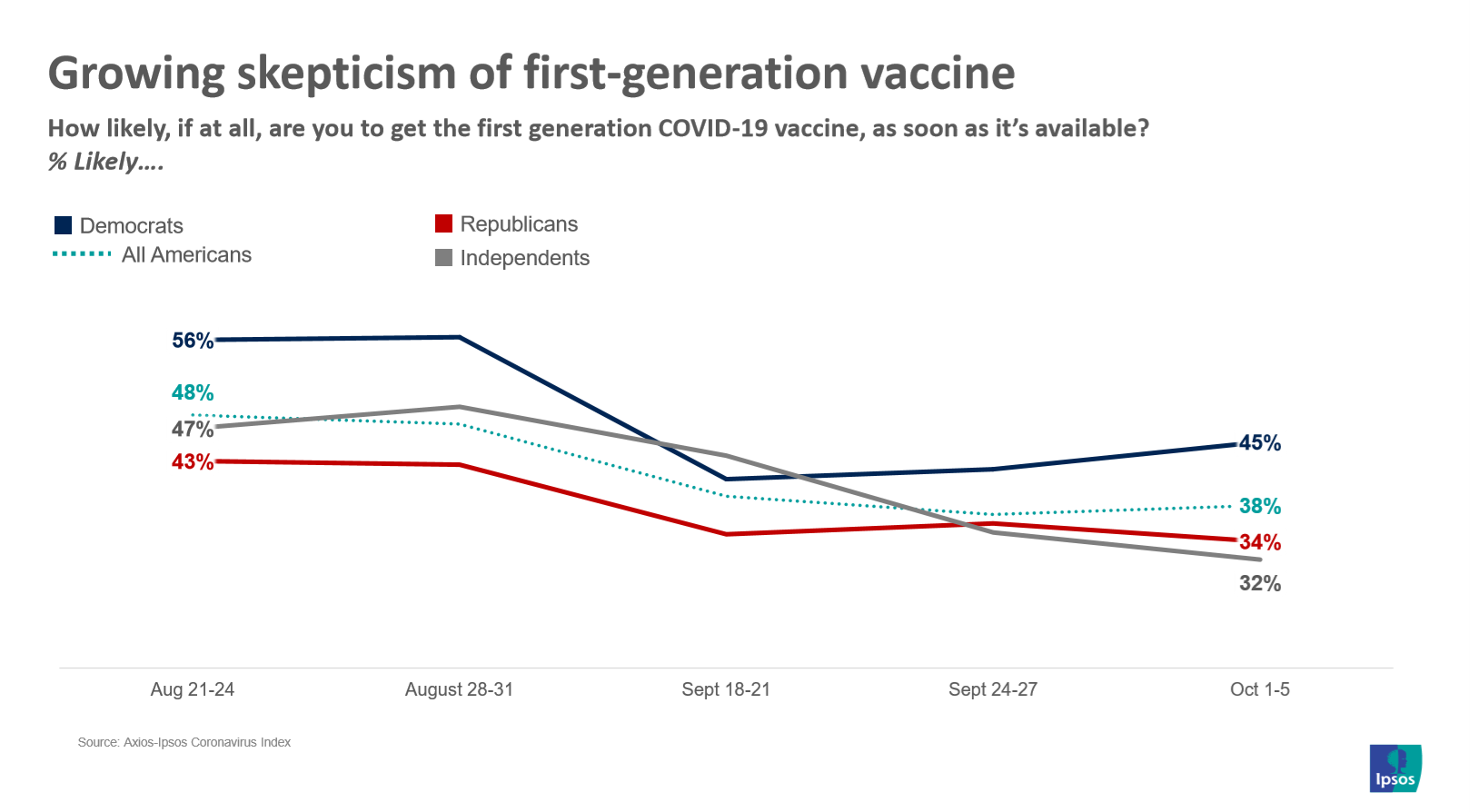 At this juncture, just 22% Americans would be willing to take a vaccine as soon as it becomes available. Instead, a plurality prefer to wait until the vaccine has been on the market for a few weeks or more.

Nevertheless, Americans most concerned about the virus would be more willing to take a chance on one straight away. One in three who see the virus as a high personal threat say they would take a vaccine deemed safe and effective by public health officials “immediately” after it became available. Just 9% say they would not take one at all. 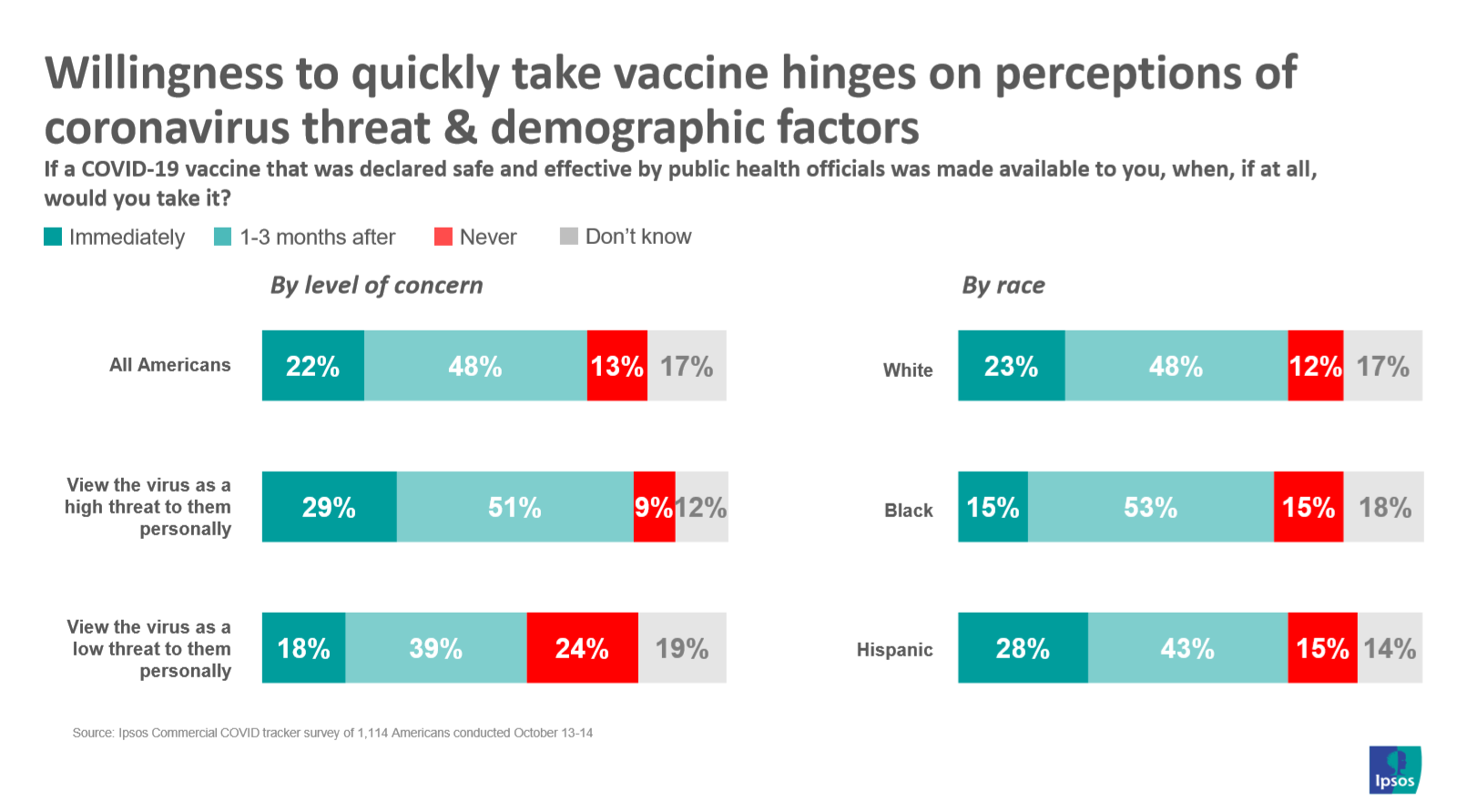 At the other end of the spectrum, 24% of Americans who see the virus as a low personal threat say they would “never” take a vaccine, underscoring the challenges that lopsided views on the inherent risks of the coronavirus present to public health officials trying to solve the crisis.

In short, most Americans want to be sure the vaccine has been proven safe to use before they test it out themselves. When presented with a choice between taking the first-generation vaccine and one that has been on the market for a few months, more Americans (55%) say they would opt for one that has been around for a few months over the first-generation version (30%). But most of all, they would prefer to take a vaccine vetted by trusted public health officials (65%). 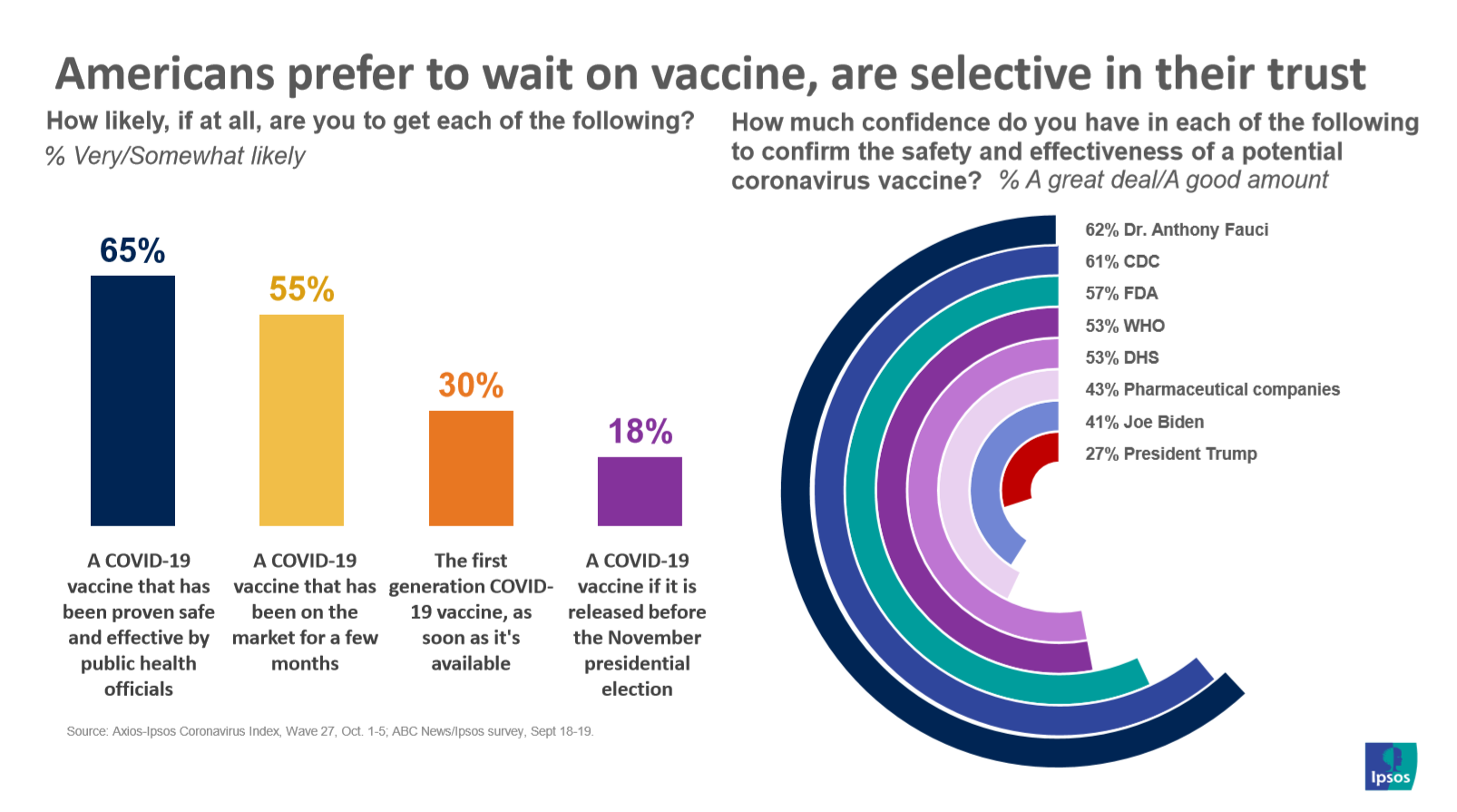 Who Americans trust to confirm vaccine safety varies greatly by partisan affiliation, but at the top of the list, 62% of all Americans trust Dr. Anthony Fauci, according to an ABC News/Ipsos survey. At the other end of the spectrum, just 27% of Americans trust Trump. This pattern flips across partisan lines – a majority of Republicans (67%) have confidence in Trump on this issue, compared to the 40% who see Fauci as credible. By contrast, 84% of Democrats trust Fauci and just 2% trust Trump.

Similar findings are echoed in a recent Axios-Ipsos Coronavirus Index survey. A majority of Americans (62%) say they would take a coronavirus vaccine if their doctor said it was safe. If Trump told them to, just 19% would.

Notably, trust in certain key public health institutions has fallen as the vaccine and virus became a focal point of partisan disputes. A majority of Americans still trust institutions like the FDA and CDC, but the signals suggest that FDA’s stamp of approval may now carry less weight following a back-and-forth with the White House around guidelines for vaccine developers. Skepticism around an FDA-approved vaccine is most prevalent among Americans of color, who have disproportionately suffered negative health outcomes or died as a result of the coronavirus.

In terms of who should be prioritized to get the first-generation coronavirus vaccine, Americans rank healthcare workers first, followed by people living in nursing or assisted living facilities, and people over the age of 65. Teachers, politicians, and Americans under 30 fall further down the list.

Americans do not expect to see a vaccine on the market in the immediate future, despite Trump’s insistence a vaccine would be ready before Election Day. Just 5% of Americans think that is the case, per a recent installment of the Axios-Ipsos Coronavirus Index. Even Republican show signs of doubt on this score, with just 9% believing there will be a vaccine before November 3rd.

Once a vaccine is developed, it may be some time before enough Americans take it for the positive effects to fully materialize. As Fauci told CNN in September, "I think if we can get 75 to 80% of the population vaccinated, I think that would be a really good accomplishment." In the meantime, Americans will need to follow basic safety precautions, like wearing a mask and social distancing. While a vaccine is essential to begin the process of better controlling the virus, it alone will not be a panacea.