The Senate officially received the articles of impeachment last week, voted on the rules of engagement for the trial, and is now in the process of hearing arguments from the House managers and the White House’s lawyers.

While Republican lawmakers are trying to replicate the timing and the cadence of Clinton’s impeachment one important difference remains: press access to the Senate.

Senate Sergeant-at-Arms in conjunction with leading Republican lawmakers restricted the media’s access to senators during the impeachment proceedings. Reporters found out about the restrictions in real time, with security guards shutting down conversations in hallways between journalists and senators, roping off areas for the media to stand in, and preventing reporters from walking with senators.

Predictably, this support fell along party lines. About two-thirds of Democrats (64%) agree that journalists should be able to take tech into hearings, votes, and the trial, compared to about a third (32%) of Republicans who hold the same opinion. There is a similar partisan divide regarding whether lawmakers should be able to give interviews and comments to journalists prior to and after any part of the impeachment process. 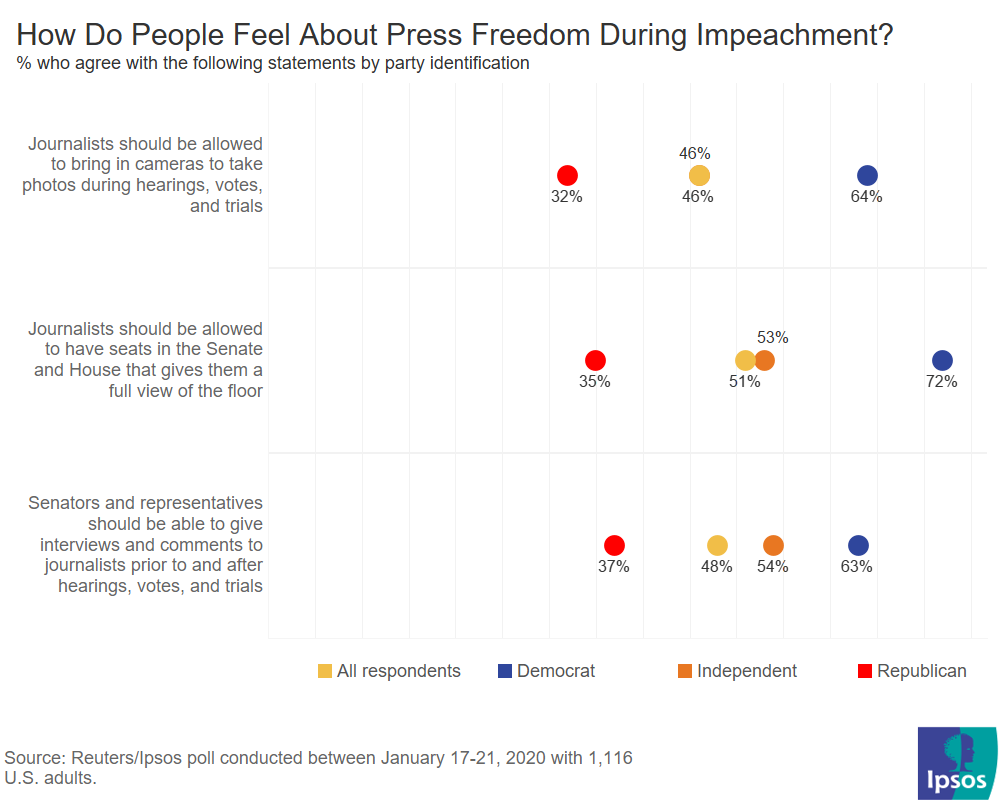 While bipartisanship among the public is increasingly rare, especially on such a divisive issue like impeachment, the appearance of non-partisanship is still important in some areas to the public. In a FiveThirtyEight/Ipsos impeachment tracker, there was near consensus that Senators should be impartial jurors, not guided by party on how to vote.

Outside of this instance of bipartisanship, views on impeachment have largely been guided by party affiliation. What television channel a person tunes into is one of the biggest predictors of a person’s views on impeachment. This relationship between party, TV, and views on impeachment, particularly when it comes to cable news, points to just how influential media narratives are at moving the public, making restrictive press access cause for concern.

This is not the first time that the press has experienced restrictions during this administration. The White House’s daily press briefings are nearly extinct. Last year the White House went over 200 days before conducting a press briefing.

The irony of limiting the press’ access to impeachment while the president is constantly accessible to the public through informal, unchecked channels, like Twitter, is a tension that embodies a large part of how the changing media environment is shaping politics, and how politics is shaping the press.